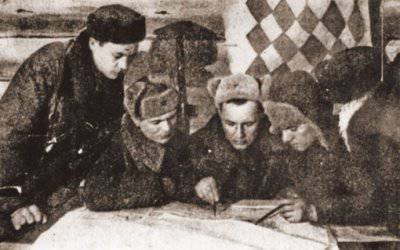 The initial period of the Great Patriotic War was especially difficult for the Soviet people. Hitler's Germany, having conquered the whole of Europe, used its military potential to destroy the Soviet state. The Red Army retreated, causing damage to the enemy in bloody battles.


27 June 1941, the Politburo of the CPSU (b) and the Council of People's Commissars of the USSR decide on the creation of a Special Group of Forces under the People’s Commissariat of Internal Affairs, designed to carry out special tasks of the High Command at the front and rear of the enemy. In October 1941 of the year on the basis of the Special Group was formed a separate motorized rifle special purpose brigade (OMSBON) of the NKVD of the USSR consisting of two regiments.

The place of formation of the brigade was the Central Stadium "Dynamo", located in the old Petrovsky Park. In addition to the chekists, 800 athletes joined the brigade, among whom there were many honored masters of sports, famous coaches, champions and champions of the USSR, Europe and the world. Among them: the famous athletes Znamensky brothers, USSR boxing champion Nikolai Korolev, a group of Minsk-based Dynamo footballers and many other famous athletes. The total number of the brigade in this period was 10,5 thousand people. In the first years of the war, not every rifle division could compare with it in terms of numbers and training.

At the Dynamo Moscow shooting range in Mytishchi, the newly created special-purpose task forces studied the mine case, the enemy’s subversive techniques, mastered the tactics of actions in small groups, night reconnaissance techniques, topography, radio business, made marches, parachute jumps - in short, learned everything. that is necessary in war.

In January, 1942 was established as part of the NKVD to manage the front-line work of the state security organs and OMSBON. 4-e Management was created. His chief, Lieutenant-General Sudoplatov, was simultaneously the deputy head of the Soviet foreign intelligence service. The backbone of the management were personnel officers of foreign intelligence.

In total, during the war years, 2200 operational detachments and groups acted in the enemy's rear. The sabotage and reconnaissance units of the NKVD destroyed 230 thousand Nazi soldiers and officers, undermined 2,8 thousand enemy echelons with manpower and equipment, obtained important military, strategic and political information, which was of great importance for the Soviet military command.

As part of the special forces fought representatives of all the republics of the Soviet Union.

Before the formed Separate motorized rifle brigade of special purpose, the Supreme military command of the country was assigned the following main tasks:
- rendering assistance to the Red Army by means of reconnaissance, sabotage and combat actions;
- promoting the development of the partisan movement;
- disorganization of the enemy rear;
- the implementation of agent intelligence in the temporarily occupied territories;
- conducting counterintelligence operations.

Intelligence and sabotage detachments of special purpose OMSBON received baptism of fire during the battle of Moscow. Acting on the main operational directions, blocking the approaches to the capital, destroying communications and disorganizing enemy rear, they actively contributed to the fact that German troops in November 1941 lost their offensive capabilities.

Often, the fighters of these units, formed primarily for sabotage and reconnaissance work in the rear of the enemy in the German-occupied Soviet territory, in the most difficult days of the battle for Moscow threw themselves into open battle with the enemy. And the words of political instructor Klochkov: “Russia is great, and there is nowhere to retreat — Moscow is behind!” Became a call to action for the KGB warriors.

One striking example of the active participation of state security officers in the defense of Moscow was the operation to destroy the headquarters of the Wehrmacht 12 Army Corps located in the small district center of the Moscow region Ugodsky Plant (the birthplace of Hero of the Soviet Union Georgy Zhukov four times - now the village of Zhukovo). And it is not by chance that this operation is dedicated to the exhibits presented in the exposition of the Hall. stories foreign intelligence, telling about the activities of security officers during the Great Patriotic War, as well as in the Central Historical Museum.

The difficult situation at the approaches to Moscow began to take shape, as is well known, already at the beginning of October 1941. On October 12, the State Defense Committee (GKO) decided to build a defensive line directly in the capital’s area. In the city, it passed along the district railway. Events took on an increasingly intense character. On October 14, Kalinin fell; on October 18, our troops left Mozhaysk and Tarusa. On October 19, a state of siege was introduced by decree of T-bills in Moscow and the surrounding areas of the city. The Chekist warriors began mining all the highways leading from the west to the capital. Many were blown up on landmines Tanks and vehicles with enemy manpower, which seriously affected the pace of the German offensive.

From 15 in November, the leadership of the NKVD began to bombard the sabotage detachments into the enemy-occupied areas of the Moscow Region. Their tasks were as follows: the destruction of manpower and the destruction of the material and technical means of the enemy; sabotage actions on enemy communications and bases; destruction of telephone and telegraph lines; active reconnaissance.

Soon, the leadership of the NKVD learned from one of the reconnaissance and sabotage groups operating in the Ugodsk-Zavodsky district that the headquarters of the 12 German Army Corps and about 4 thousands of German soldiers and officers with weapons and equipment were located in the regional center. It was decided to defeat this headquarters with the forces of the combined detachment as part of the 300 fighters. Intelligence and sabotage groups led by senior state security lieutenants Nikolai Arkhipov, Dmitry Kaverznev and Vadim Babakin were involved in the operation. The captain of the state security Viktor Karasev led the consolidated detachment.

19 November 1941, a detachment concentrated in 2 kilometers from the Yasnaya Polyana farm and began active reconnaissance. The operation was scheduled for November 23. In 23.00, the groups returned to their original position - the edge of the forest in 500 meters from the city. Babakin's group was to seize and destroy the telephone exchange, radio center and mail. The Kaverznev group was entrusted with the destruction of officers stationed in the building of the former district committee of the CPSU (b), turned into an officer’s hostel. Groups of Arkhipov and the commander of the consolidated detachment Karasev were tasked with smashing the central office of the corps headquarters and the soldiers' dormitories. The fighters were armed with machine guns, machine guns, rifles, RGD grenades and anti-tank grenades, as well as incendiary bottles. The assault on all the targeted objects began simultaneously.

The suddenness of the raid stunned the Germans. During the operation, the headquarters was completely destroyed, important documents were captured, the fuel depot, vehicle repair base, 80 trucks and 25 cars, 4 tank, armored vehicle, ammunition train and several machine guns were destroyed. Opponent lost killed about 600 people, among them - a lot of officers.

The losses of the consolidated commando unit amounted to 16 people killed and 8 - wounded.

When they left the area of ​​the operation, the units of the consolidated detachment defeated the punitive Gestapo detachment, whose losses amounted to more than 40 people killed and wounded.

Information about the successful actions of the joint sabotage detachment 29 November entered the evening message from the Soviet Information Bureau, and the next day was published in all the central Soviet newspapers.

And there was a war

The commander of the consolidated detachment, Viktor Karasev, in February 1943, headed the special reconnaissance and sabotage detachment "Olympus", which operated on the territory of Belarus, Ukraine, Poland, Czechoslovakia and Hungary. The Olimp fighters conducted more than 130 successful operations against the fascist invaders.

5 November 1944 was awarded the title Hero of the Soviet Union to Viktor Karasev. After the war, after graduating from the Frunze Military Academy, he worked in the system of the MGB-KGB of the USSR. His comrades, commanders of the sabotage groups participating in the operation at the Ugodsky Plant, Nikolay Arkhipov, Dmitry Kaverznev and Vadim Babakin, who were part of the operation in the Ugodsky Plant, also actively fought the enemy before the Great Victory, and after the war they successfully worked in various departments of state security agencies.

Ctrl Enter
Noticed oshЫbku Highlight text and press. Ctrl + Enter
We are
Aircraft designer Sergey Ilyushin: the creator of record holdersDiplomats of the People's Commissariat of Defense: on the eve and during the war
Military Reviewin Yandex News
Military Reviewin Google News
8 comments
Information
Dear reader, to leave comments on the publication, you must sign in.