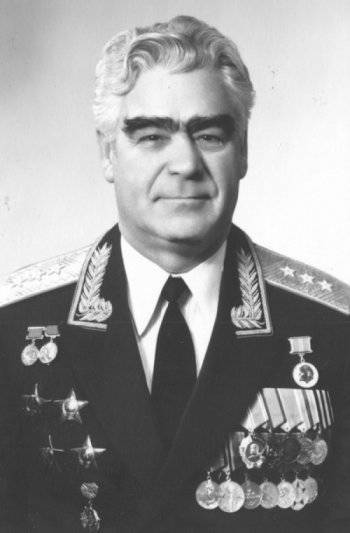 29 August marks the 90 anniversary of the birth of the Great Patriotic War participant, Colonel-General Alexander Alexandrovich Maksimov, the first head of the space units of the Ministry of Defense.


Was born Alexander Alexandrovich in 1923 in Moscow. Childhood was not easy, he grew up without a father, the family had three children, the eldest Alexander was the main assistant to the mother. In the 1938 year, having graduated from the 7 classes, I entered a special artillery school. “In those years, A.A. Maksimov was distinguished by his outstanding abilities, initiative, efficiency, efficiency, honesty, unselfishness, and was even elected secretary of the Komsomol organization, ”said his classmate, laureate of the USSR State Prize, Major General Mikhail Borchev. These qualities Alexander carried through life.

In January, 1942, he graduated from the accelerated course of the Leningrad Artillery Technical School, served as commander of the regimental artillery workshop of the anti-tank regiment of the 26 Army of the Karelian and 3 Belorussian Fronts. War ended in Konigsberg. The workshop under his leadership in a timely manner ensured the serviceability of the artillery materiel of the regiment, and many times under enemy fire, Maksimov personally eliminated damage to the guns directly in the positions. He ended the war with a captain, for heroism shown during the capture of the city of Konigsberg, was awarded the Order of the Red Star and the medal "For the capture of Konigsberg".

AFTER THE WAR entered the Dzerzhinsky Artillery Academy, which he graduated from 1952 year. He received an appointment to the military office at the design bureau S.P. Korolev, then served in the 4-rd Directorate of the Main Artillery Directorate, participated in the development and flight tests of the P-7 missile. Alexander Alexandrovich happened to be the secretary of the state commissions for launching the first artificial Earth satellite and the first man, Yuri Gagarin, into space.

A veteran of the Space Forces, laureate of the State Prize of the USSR, Major-General D.G., wrote about those times. Andronov: “I first met A.A. Maximov in 1956 year at the site Kapustin Yar. He was then a lieutenant colonel, was the head of a group of officers of the 3 control of the chief of jet weapons and military representatives and was secretary of the state commission for testing the M5RD missile. Despite the responsible and worrying duty of the Secretary of the State Commission, he found time to communicate with us, the young officers in his group. On weekends he organized collective trips to rest, fishing ... Maximov was the soul of the company: songs, dances, ears, jokes, jokes - he initiated all this, supported and approved. ... After the rest, we took up the work with renewed energy. ”

CARE about the officers the red line runs through the entire service. Aleksandr Aleksandrovich for a long time headed the housing commission of the cupola. During this time, a large number of officers and employees of the central apparatus and military representatives received apartments.

While serving in the office of the deputy commander of artillery - the chief of jet weapons of the Main Directorate of Missile Weapons, he headed the launch vehicle department, and in 1964 - the Center for Managing the Development and Production of Space Weapons. Work on space assets expanded, in 1970, the General Directorate of Space Facilities (GUUKOS) was created, and Maksimov was appointed Deputy Head of GUUOS. Then he became first deputy, and in 1979 year - the head of the main department. In this post, and revealed his outstanding talent of the organizer and scientist.

Under the leadership of Alexander Alexandrovich, new space complexes are being created, the command and control structure is being improved, methods of using space vehicles are being developed, much work is being done on the use of space tools in the interests of the national economy and science (communications, navigation, remote sensing of the Earth, implementation of manned launches). In 1987, General Maximov defended his thesis, he was awarded the academic degree of candidate of technical sciences. It should be noted that he wrote this thesis independently, without the help of “pundits”, which, alas, was already often practiced by large leaders.

Further transformations, both in the structure of the central apparatus and in subordinate units, were aimed at achieving a high degree of centralization of leadership. In 1986, they logically led to the reorganization of GUKOS into the Office of the Chief of Space Facilities of the USSR Ministry of Defense, headed by Alexander Alexandrovich.

TOP His activity during this period was the launch on November 15, 1988 of the Energia-Buran space-rocket system. Answering the questions of the journal "Aviation and space exploration, ”Colonel General Maximov said:“ This victory was laid down by the many years of work of the entire Soviet people. ”

He compared the launch of "Buran" with the launch of the first artificial satellite of the Earth in importance. “In order to understand this, it is necessary, perhaps, to say a few words about the crucial period that is now occurring in astronautics, and about the role of Buran in it,” he said in an interview with a journalist. “Today, as never before, the Tsiolkovsky’s prophetic words are close to practical implementation:“ Humanity will not remain forever on Earth, but in the pursuit of light and space, it will at first timidly penetrate the atmosphere and then conquer all the solar space ... ”.

According to Alexander Alexandrovich, “the development of productive forces has now reached a stage where it became possible to talk about the removal of a number of energy-intensive technologies and environmentally harmful production processes into space, about using space for energy and other promising technologies. The solution of the problems mentioned and similar to them is connected with the operation of reliable and efficient reusable transport space-rocket systems and permanently operating orbital stations. Now these are stations of the Salyut and Mir types, and later on large orbital structures with the developed Earth-to-space and space-to-Earth transport systems ...

Col. Gen. V.L. Ivanov (chief of staff of the Office of the Chief of Spacecraft from 1985 to 1989) wrote in his book, “I Have the Honor”: “A special feature of space units was that they were not only constantly in a state of readiness for combat use, but also solved combat missions daily on the preparation for the launch of launch vehicles with spacecraft, control of orbital groups. During these years, the command council under the leadership of Colonel-General Maximov paid much attention to strengthening the organization of the combat use of space assets. We with the head of the space vehicles systematically traveled to the space launch sites and subordinates of the command-measuring complex to manage the work on launching space vehicles, providing on-site assistance, checking combat training and selecting senior personnel. ”

Colonel-General Ivanov still keeps the issue of the journal Aviation and Cosmonautics, on the cover of which, after the successful completion of the flight of the Buran spacecraft, the head of the space assets of the Ministry of Defense left the following inscription: “I remember Vladimir Leontyevich with my interview as the immediate culprit” Companion and participant of these prestigious works for Russia. "

Overflow Before his transfer to the reserve in 1989, Alexander Alexandrovich carried out purposeful work on the further improvement of space activities, the development and technical equipment of the command and control system, and the development and practical development of promising space facilities.

For achievements in the field of space technology development, General Maksimov was awarded the high title of Hero of Socialist Labor (1984), he was the winner of the Lenin Prize (1979) and the State Prize of the USSR (1968).

But too much was given to the forces, experiences, and the heart could not stand the overload. And it stopped beating, not when he was resting, but when he was in a hurry to work, October 12 1990, in the 68 year of life.

But he is not forgotten by his disciples and associates. His name is the branch of the Khrunichev State Space Research and Production Center - the Research Institute of Space Systems, a street in the city of Leninsk (Baikonur), and an area in the city of Krasnoznamensk. A memorial plaque is installed on the building of the headquarters of the Main Testing Center.

Ctrl Enter
Noticed oshЫbku Highlight text and press. Ctrl + Enter
We are
Looking to the futureToday 79 would be the first man who flew into space - Yuri Alekseevich Gagarin
1 comment
Information
Dear reader, to leave comments on the publication, you must to register.