2 September 2013
40
The end date of the Second World War was set on the day of the signing of the Japan Surrender Act - the last member of the Berlin-Rome-Tokyo coalition, which emerged from the war, which ended for global aggressors who were planning to subjugate the whole world to themselves with complete and unconditional defeat.


According to the Act, military actions from Japan ceased immediately, all its armed forces unconditionally capitulated, while weapon, military and civilian property remained without damage. The Government of Japan and the General Staff of its army were ordered to immediately release all prisoners of war from the Allied armies, as well as all civilians interned during the war. All Japanese officials pledged to strictly follow the instructions and follow the orders of the High Command of the allied countries. 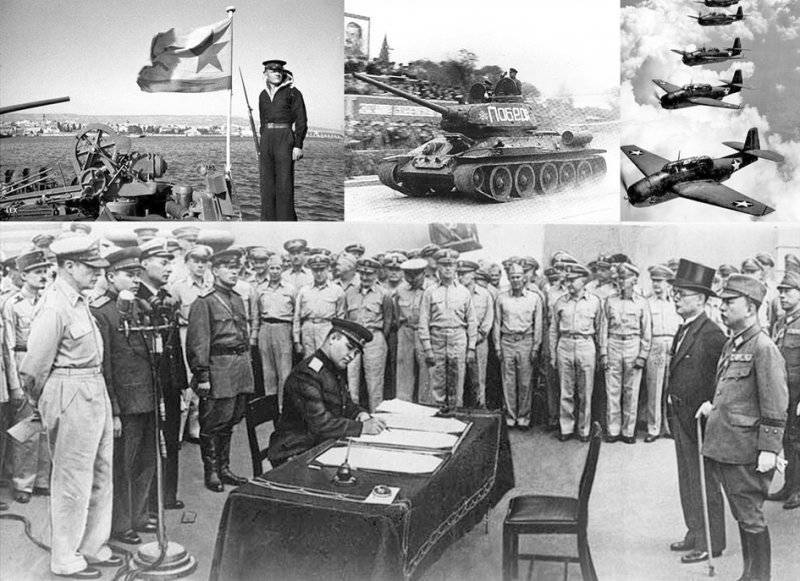 According to the terms of the Potsdam Declaration, Japan’s sovereignty was limited to the four largest islands of Honshu, Kyushu, Shikoku and Hokkaido - the basis of its national territory, as well as a number of surrounding islands, but smaller islands of the Japanese archipelago. At the same time, the islands of Iturup, Kunashir, Shikotan and Habomai were ceded to the Soviet Union. Today, these islands are an integral part of the Russian Federation - the successor of the USSR.

The worst war in the world stories lasted exactly six years plus one day. Starting September 1, 1939, the global massacre unleashed by the hands of distraught, man-hating fanatics who imagined themselves as the arbiters of the fate of the entire planet, took the lives of more 65 MILLION PEOPLE.

The main events of the great war developed on the territory of our country. It was on the Eastern Front that the main world aggressor, Hitler Germany, suffered up to 93% of all its losses. Victory in the most terrible war in the history of mankind is priceless, its price is incalculable, but our great people paid the highest price for it. This fact cannot be questioned.

I would like to hope that mankind has forever learned the lessons of the Second World War, and the global misfortune will never happen again. Unfortunately, with the end of the last world fire wars on the planet have not diminished. The twentieth century and the beginning of the twenty-first century were marked by a number of local wars, indirectly, and more recently, the leading world powers have become direct participants, some of which seem to have forgotten the horrors of world wars, guided by the same considerations and motives all the aggressors of the past ...