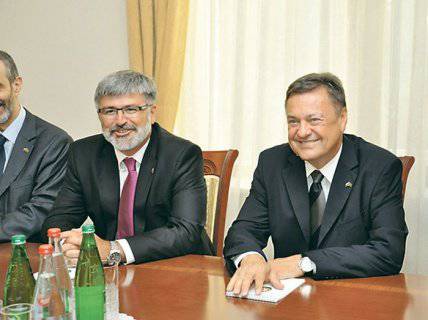 Azerbaijani President Ilham Aliyev has received the Minister of Defense of Slovenia, Roman Yakic. Prior to this, the Slovenian guest held talks with some heads of ministries and departments of Azerbaijan and met with his colleague Safar Abiyev. The visit of the head of the Slovenian Defense Ministry to Baku was fruitful for both sides, the press service of the Ministry of Defense of Azerbaijan stated after its completion.

According to the press service of the Ministry of Defense of Azerbaijan, the head of the department, Colonel General Safar Abiyev, during a meeting with Roman Yakich, indicated that the military agreement signed by the parties two years ago opens up great opportunities for the development of cooperation.

The parties prefer not to elaborate on the details of these opportunities, limiting themselves to information for the press about their interest in expanding cooperation in the field of military education. However, Baku today is interested not so much in the educational aspects of cooperation with the military departments of other countries, but in the potential capabilities of these countries in the field of trade in modern weapons and equipment. In this sense, it is not yet clear what Ljubljana can offer Baku, which from year to year increases the purchase of modern military equipment and weapons.

According to the statistics of authoritative military publications, the volume of imports of military products by Eastern European countries in 2008 – 2012 increased by 21% compared to the same previous four years. And it happened mainly due to Azerbaijan, which became the only country in the region that increased military imports by 155% and moved from 48 to 35 in the list of global importers. The same leap is observed in the rating on the allocation of funds for defense needs - in the budget of Azerbaijan's 2013, defense expenditures will amount to 3 billion 700 million USD. Of these, almost 1 billion was allocated for the purchase of Russian military equipment and weapons.

As NG has already reported, in the current year, deliveries of land military equipment began under a package of contracts concluded with Russia in 2011-2012. In particular, we are talking about six battalions (94 units) tanks T-90S and BMP-3 infantry fighting vehicles (about 100 units), the Msta-S self-propelled artillery division (18 units), the Smerch multiple launch rocket launcher system (18 MLRS), and the self-propelled artillery division guns "Vienna" (18 units) and a battery of heavy flamethrower systems TOS-1A "Solntsepek" (6 units of a new modification of the system "Pinocchio"). At the same time, T-90S tanks are purchased in the most advanced standard configuration at the moment, including a new modification of the Shtora optical-electronic suppression system.

However, the interests of the Azerbaijani military are not limited to this. Recently it became known that Baku intends to acquire a large batch of modern weapons and South Korea. In particular, we are talking about the purchase of ships, helicopters, unmanned aerial vehicles, fire control systems, etc.

According to the Korean edition of Hankook Ilbo, the desire to acquire modern military equipment was announced during the visit of the delegation of South Korean parliamentarians to Baku. In particular, Azerbaijan offered to buy from Korea two submarines, a destroyer, a transport ship, supersonic training aircraft T-50, one of the world's best ACS K-9 caliber 155 mm, helicopters, unmanned aerial vehicles, fire control systems, etc. worth about 3 billion dollars. Official Baku explained its intentions with a desire to strengthen the capabilities of the country's armed forces in protecting its rich oil and gas fields. The source of Hankook Ilbo in the South Korean legislature also said that these proposals were communicated to the government, however, the Korean side has not yet given consent to the deal.

Meanwhile, Azerbaijani analysts are inclined to believe that Baku is likely to succeed in convincing the Korean side, because this contract will allow Korean gunsmiths not only to earn a substantial amount, but also strengthen South Korea’s image as the world's leading arms supplier, which Seoul has long wished for.