September 2 911 was a treaty of Russia with Byzantium 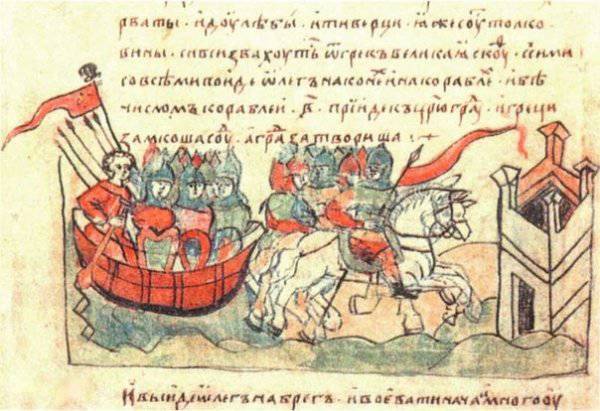 September 2 The Russian Embassy 911 has concluded an agreement with the Byzantine Empire. The agreement established friendly relations between Russia and the Byzantine state. The order of punishment for criminal offenses committed by Russian and Greek merchants, the rules of court conduct were established. The agreement created favorable conditions for doing business, determined the procedure for the redemption of prisoners. Shipwrecked crews were now to receive assistance (before they were captured and plundered property). Russian guests (merchants) got the right to live in the Byzantine Empire for half a year at the expense of the Greek side, got the right of duty-free trade.


The agreement was concluded after the successful march of Russian troops in the 907 year, which by land and sea routes approached the walls of Constantinople (Constantinople). Romans, frightened by the appearance of powerful Russian troops, did not resist and asked for peace. This campaign is interesting because the teams of northern, western and southern Slavic (Russian) tribal unions united by Oleg Veshim, as well as soldiers of Finno-Ugric tribes that were part of the Russian state (Chud, Meria) took part in it. The Romans paid a great tribute to the Russian soldiers. Friendly relations between Rus and Byzantium were established. In the future, Russian squads more than once helped the Byzantine basileus crush the uprisings, revolts in the empire, and repel the attacks of Arabs.

Grand Prince Oleg Veshchy entered history Russia as the great creator of the Russian state (Prophetic Oleg - the creator and keeper of the Russian state. To the 1130 anniversary of the unification of the north and south of Russia.). Oleg began to rule the northern Russian lands after the death of Rurik, since the son of the Grand Duke, Igor, was too small. In 882, Oleg seized Smolensk, Liubech and occupied Kiev with the northern militia. Askold and Dir, who ruled in Kiev (some researchers consider them Varangians, others - the last princes of the local, Polyanian dynasty) were killed. There was a union of the North and South of Russia into a single, powerful state. Kiev was more conveniently located and became the control center of a huge power. Almost immediately, the consequences of this step were reflected on the world stage.

Oleg continued the work of uniting the Slav-Russian tribes. Rather, unions of tribes ("lands"), uniting several tribes or even several dozen tribes that had their capital cities, princely dynasties, guards. The first princes of the Rurik dynasty - Rurik (Falcon), Oleg, Igor and Svyatoslav pursued a line on the unification of the Slavic lands into one whole. There were attempts to include in the composition of Russia and the southern Slavs. So, Svyatoslav wanted the new capital of Russia to be on the Danube, including part of Bulgaria as part of the state. Such a policy is fully consistent with the then geopolitical realities and national interests of the Russian state. East Slavic (Russian) tribal unions were threatened with loss of political independence and cultural assimilation. Rome was advancing in the West, which gradually absorbed the Slavic lands in Central Europe. The mighty Slavic unions, such as Lutichi and encouragement, having dozens of cities, developed crafts and trade, famous religious centers such as Arkona, led a long struggle with the Crusaders, but in the end suffered a complete defeat. The Slavs were partly killed, partially driven out to the east, most underwent assimilation. Slavs lost their language, faith, became all sorts of "Germans". Other Slavs, such as the Croats and Poles (Poles) adopted the Western version of Christianity, largely lost their "feature", came under the control of Rome. They became part of the “Western matrix”, civilization, the worst enemies of those southern and eastern Slavs who retained their identity and independence from Rome (the West).

Another danger threatened from the South - Islam, the main bearers of which the Arabs were then. The Byzantine Empire shuddered under the blows of the Arab conquerors, losing most of its territories in Africa and the Middle East. The Arabs even broke through the Caucasian ridge, inflicting a serious defeat on the Khazars. Military expansion was accompanied and cultural. Many nations converted to Islam. In particular, Islamization has destroyed most of the culture of the ancient Persian (Iranian) civilization. Under the threat of falling was Byzantium. In addition, the threat from the Khazaria grew from the south.

Obviously, separate, independent Slavic "lands" (tribes), even the most numerous and powerful, could not withstand the threat from the West and the South. The example of strong West Slavic unions of Lutichi and obedrites (bodritches) is very indicative. A terrible danger threatened the Rusam - the complete disappearance of their language, faith and culture. It was possible to resist only by uniting the united power, the empire. It was necessary to combine independent lands into a single state, with a single control center, one army, judicial system, taxes, etc. The first princes of the Rurik dynasty solved this task brilliantly. It was not their fault that their descendants turned out to be unworthy of the “Monomakh’s hat”.

In 883, Oleg subjugated Drevlyans (the territory of Polesye), laying a tribute to them for the “black kuna” - marten with smoke (family, yard). The following year, Oleg Veshchy subjugated a strong and numerous tribe of northerners. They settled the territory of modern Chernihiv, Sumy, Bryansk, Kursk, Belgorod regions. The northerners were freed from the power of the Khazars, which was a heavy yoke for them. In the 885 year, Oleg subordinated the Kiev radio Radiches, who also paid tribute to the Khazars. The lands of the Radimichi were located between the upper Dnieper and the Desna, along the course of the river Sozh and its tributaries. Later, Oleg included in a single state alliances of streets and Tivertsy, which inhabited vast lands from the lower reaches of the Dnieper, the Southern Bug and the Black Sea coast to the Dniester and Prut interfluves, and the Lower Danube.

The unification of the Russian lands seriously strengthened the military might of Russia. In 907, a large Russian army, part of which was moved by sea and the other by land, attacked Byzantium. The Great Skuf (Skifia) has assembled a powerful fleet of 2 thousand ships. The cavalry moved by land, along the western coast of the Black Sea, having crossed the Southern Bug, the Dniester and the Danube, it came out to Tsargrad through Bulgarian territory. After the Russian troops ravaged the environs of Constantinople and began to prepare for the assault on a huge city, the Greeks asked for peace. The negotiations concluded with the conclusion of the 907 peace treaty of the year, which was confirmed in the 911 year.

Ctrl Enter
Noticed oshЫbku Highlight text and press. Ctrl + Enter
We are
War Svyatoslav with Byzantium. Battle for Preslav and the heroic defense of DorostolSeptember 2 911. The first international treaty between Russia and Byzantium was concluded.
Military Reviewin Yandex News
Military Reviewin Google News
17 comments
Information
Dear reader, to leave comments on the publication, you must to register.