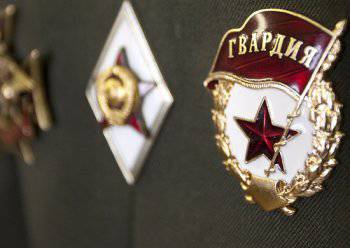 The Russian Imperial Guard was established at the very beginning of the reign of Peter the Great. It was based on the Regiments of Preobrazhensky and Semenovsky, which were loyal to the Sovereign.

After the collapse of imperial Russia, in 1918, the Imperial Guard was dissolved. An attempt to restore the age-old Guards traditions was undertaken only in the years of the Great Patriotic War. Distinguished in the bloody battles under the Hero-City of Smolensk in 1941, 4 rifle divisions, according to the order of the Supreme Commander, received the honorary name of the Guards. In September of the fatal forty-first, a new concept of the “Guards unit” was introduced into the army lexicon. In the future, the title of "Guards" was assigned to units, ships, formations and associations of the USSR Armed Forces, distinguished themselves in battles against Nazi Germany. A special Guards flag was handed over to the military formation, and its personnel were given the Guards rank and were given the corresponding badge.

The current guards are followers of the glorious traditions of grandfathers and great-grandfathers, the real elite of the Armed Forces of Russia, a reliable support and protection of the Russian state. Today we heartily congratulate them on the holiday, wishing them to be worthy successors of the great work of protecting the People and Fatherland!

Guard as part of the modern Armed Forces of Russia: