What will Syria fight in case of possible external aggression? 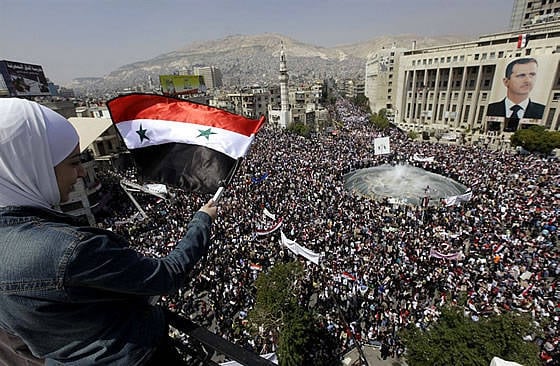 On the eve of TSAMTO conveyed a message about the potential of Syria to repel external aggression. In connection with the rapid development of the situation, TSAMTO publishes extensive material on this topic.


As already reported, the situation around Syria has strained to the limit under the far-fetched pretext of the use of chemical weapons by government forces. weapons.

What has changed in the political arena over the past day in assessing the possibility of a strike on Syria?

US President Barack Obama is ready to sanction a limited military strike on Syria, despite the refusal of the British authorities to participate in the operation, the Washington Post reported, citing representatives of the US administration.

On the eve of the British Parliament rejected a proposal by Prime Minister David Cameron on a possible military operation in Syria. The vote was advisory in nature, but D. Cameron said that he would act according to the opinion of parliament.

It should be noted that two days ago, the British Foreign Ministry for the aggressiveness of military rhetoric even outstripped the United States, saying that "the military operation against Syria will begin, even despite the UN Security Council veto."

Commenting on the refusal of the British authorities to participate in the military operation, a representative of the US National Security Council Caitlin Hayden said “RIA News”That US President Barack Obama will be guided by the national interests of the United States when deciding on Syria.

“Despite the statements that B.Obama did not make a final decision, everything indicates that the blow may occur as soon as the UN inspectors investigating the alleged Himataku leave the country on August 9, the Washington Post writes.

The meeting of the five permanent members of the UN Security Council on the situation in Syria ended the day before without a specific decision, reports France Press.

The meeting of the Five (China, Russia, Great Britain, the USA and France) was held on the initiative of Russia.

The subject of the consultation was a draft resolution proposed by the UK, which provided for the adoption of all necessary measures to protect civilians in Syria, including the possibility of using force against the Syrian authorities. On Wednesday, representatives of the "five" have already discussed this British initiative and also did not come to an agreed decision.

According to TSAMTO, if Russia and China, acting jointly on the Syrian issue, will succeed in unblocking the situation at the diplomatic level, this will be a great victory for common sense.

Considering the fact that the regular units of the Syrian army have recently achieved significant success in combating armed oppositions (read mercenaries), the made-up pretext of allegedly using chemical weapons by the troops is the “last grip” to unleash aggression against Syria and accomplish the task which the armed opposition could not decide - to overthrow the regime of Bashar al-Assad.

Therefore, Russian diplomacy in cooperation with the Chinese side is facing extraordinary efforts to ensure the supremacy of the UN Security Council resolution on Syria when making certain unilateral decisions (bypassing the UN Security Council) by Western countries (primarily the United States). In addition, it is necessary to ensure the utmost objectivity of the investigation by UN inspectors of the use of chemical weapons in Syria.

What can Syria oppose in case of external aggression?

An obvious advantage, in the case of a ground operation, is the mobilized army, which has recently gained tremendous experience in fighting the armed opposition, including in urban environments. The disadvantage is that part of the military infrastructure has already been destroyed by opposition militants. It is possible that damage was caused to a number of bases where ammunition is stored, as well as to military infrastructure facilities. Based on the fact that hostilities with the opposition are conducted almost throughout the country, it can be assumed that the location of key military infrastructure in Syria has long been known both to militants and their foreign sponsors.

With regard to the combat readiness of the Syrian Air Force, it should be noted that the fighter aviation during the armed struggle with the opposition it was used extremely rarely, and there is no data on the effectiveness of the use of military helicopters (several helicopters of the government army were lost as a result of shelling from MANPADS).

The existing air defense weapons were absolutely not involved, which in the case of external aggression should play a key role (obviously, at the first stage these will be massive strikes with cruise missiles with the further use of aircraft on key military infrastructure).

In recent years, Russia has carried out several large arms shipments to Syria. Among the largest programs in the air defense segment:

- supply of 36 ZRPK Pantsir-С1 (the contract was concluded in 2006 year, deliveries began in 2008 year, this year, presumably, the last batch of 6 units must be delivered);

- delivery of a large batch of Igla MANPADS as part of the Sagittarius launch modules (order from 2005 of the year, delivery to 2005-2006, the number is not known);

Prospective purchases in the short term in the air defense segment:

- the purchase of the Tor-M1 air defense system (the application has been received for a long time, the program status is not known);

Supposedly, deliveries under this contract should be completed no earlier than mid-year 2014. After delivery, commissioning and comprehensive testing of the operation of all the equipment included in the C-300 ZRS, it will take at least six months to train Syrian specialists, even if they have previously completed training in Russia. Therefore, the achievement of full combat readiness of Syrian C-300 SAMs (if they are delivered anyway) can be expected no earlier than the end of 2014 - the beginning of 2015 of the year.

Among the other largest programs that are currently implemented with Syria, it should be noted that the OBT T-72 fleet was upgraded to the T-72М1 level (around 1000 units), two Bastion-P PBRKs were delivered, a large number of aircraft MiG-23 fighter fleet, modernization of several MiG-29С fighters, delivery of training equipment for Mi-17 and Mi-24 helicopters and a number of other programs.

Among the promising projects were discussed the possible purchase of diesel-electric submarines, MBT T-90С, various types of surface war ships, a number of other weapons.

Currently, contracts for the supply of several weapon systems, including 24 fighter jets MiG-29М / М2 and 36 Yak-130UBS, are underway with Syria, but now they are suspended because of the actual blockade of transport routes by Western countries.

In addition to Russia, a number of Syrian weapons systems put Iran and, possibly, North Korea.

The military-technical cooperation of Russia and Syria began in 1956. During the period of cooperation, about 65 tactical and operational-tactical missile systems, about 5 thousand, were delivered to the Syrian Armed Forces. tanks, more than 1,2 thousand combat aircraft, 4,2 thousand artillery guns and mortars, 70 warships and boats, other types of weapons.

From the point of view of ensuring its geopolitical influence in the region for Russia, the preservation of the item of material and technical support of the Russian Federation is of key importance. fleet in the Syrian port of Tartus. The MTO point in Tartus is the only reference point of the Russian Navy in the Mediterranean Sea.

With the loss of Tartus, the deployment of the Russian naval force on a permanent basis in the Mediterranean Sea will become problematic.

In the case of the fall of the Bashar Assad regime, Russia, represented by Syria, will lose its almost only current ally in the Middle East, and the loss of profits due to the cessation of military-technical cooperation with Damascus will amount to several billion dollars.

If, as a result of external aggression, the legitimate authority in Syria is forcibly overthrown, the next predictable step will be the military operation of the USA and Israel against Iran, which will bring the theater of military operations closer to the borders of Russia.

Ctrl Enter
Noticed oshЫbku Highlight text and press. Ctrl + Enter
We are
A great interview with Sergey Lavrov: about Ukraine, Obama and IranInterview by President Bashar Al-Assad to the Sunday Times
Military Reviewin Yandex News
Military Reviewin Google News
179 comments
Information
Dear reader, to leave comments on the publication, you must sign in.