Syria in exchange for a surplus?

2 September 2013
492
The more the subject of a possible intervention by NATO troops (the so-called "allies") in Syria is exaggerated, the clearer the financial and economic components appear as the background of this topic. The main question associated with any military campaign of recent years, sounds like this: what changes are waiting for the world economy in the event that military aggression from outside (in this case for Syria) really takes place? What will happen to oil prices, the rates of the major world currencies, and how will all these changes affect regional financial systems? 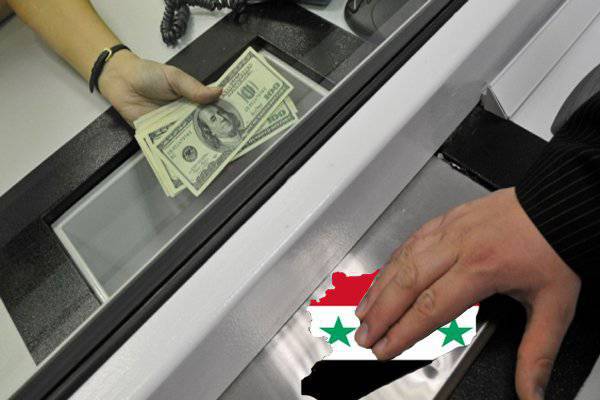 If you look at the first economic “swallows” of the unwinding military intervention of the “democratizers” in Syria, the first thing that catches your eye is the rather rapid jump in oil prices. For the first time in the past six months, the price of oil on the world market has exceeded 115 dollars per barrel. With what it can be connected?

The main reason for the rise in prices for "black gold" is undoubtedly tied to a possible expansion of the center of instability in the Middle East if the US partners decide to invade Syria covered by civil war (which, by the way, themselves initiated) Syria. Financial experts from a number of European banks say that as soon as the first rocket is fired from one of the NATO warships or airplanes according to the positions of Syrian government troops or important government facilities in Syria, the price of oil may rise above the historical maximum, rising to 150 dollars per barrel for the first few weeks, or even days.

If the war in Syria, in which the West can get involved, stimulates the price growth of oil and other carbohydrates, another question arises: is this the same for the American authorities? At first glance it may seem that they themselves are cutting the branch on which they sit. After all, if the support of Syrian militants leads to an uncontrolled jump in the cost of a barrel of oil, then fuel prices will not be able to remain at the current level - they will also begin to accelerate, leading to an increase in inflation (rise in prices for goods and services) in the United States itself, a substantial percentage of hydrocarbons imported from the same Middle East. If so, then the following picture emerges: either the White House (or where its owner is controlled from) is sure that the invasion of coalition forces in Syria will not lead to unwinding of oil prices, or Washington has alternative considerations.

First, that "will not entail." Only deep-rooted romantics can hope for this, confident that the desire to make war in Syria is based solely on the democratic impulses and the need to help the "brotherly" people in their "struggle" with Bashar Asad. Are there such romantics among the representatives of the American authorities? If there is, then a person and a half ... To understand that the escalation of the Syrian conflict will lead to an increase in oil prices, it is enough to turn to the not so old stories. About seven years ago, the Israeli army attacked Hezbollah’s positions in Lebanon. It would seem that Lebanon is not at all the country that can be attributed to the powerful hydrocarbon powers, but this did not prevent the oil prices from jumping by about 14,5% in a few days. The reason was the fear of the stockbrokers that the Israeli attack could provoke a chain reaction that would lead to a big war in the Middle East. It turns out that if oil went up in the case of Lebanon, then nothing would prevent it from taking off in the case of Syria. Moreover, it is already setting seasonal records, and yet the invasion is being discussed only in words.

So, it is worth considering the above mentioned alternative considerations of US political and financial circles.

So, from the possible invasion of Syria, hydrocarbon prices are likely to go up, and go up quite significantly. The same growth will lead to a simultaneous increase in incomes of leading oil exporters (from Venezuela to Russia and the oil empires of the Persian Gulf). For example, for the Russian budget, the growth of oil and gas revenues from a sharp increase in the price of oil on 10 dollars per barrel, according to experts of the Economic Policy Institute, could be at least 700 billion rubles. If we assume that oil from the current $ 113-115 per barrel will jump to $ 150 (by about $ 35) in a short period of time, then the inflow of petrodollars to the Russian budget, respectively, will be enormous in 2,45 trillion rubles (about 74 billion dollars with the current course). And this dollar fountain will be characteristic not only for Russia, but also, for the same reasons, for other world exporters.

It turns out that by invading Syria, the United States of America is trying to solve the most important task for the American economy: to make sure that the world economy does not even have the ability to abandon the dollar as the main currency of today's financial transactions. But there are a lot of examples of the desire to reduce the dollar value. One of them - 25-year contract of Russia and China for the supply of oil, in which the two sides mentioned the need to carry out mutual settlements in national currencies. One can imagine how painfully it hit at the will of the ruling financial elites in the United States at any cost, forgive me, injecting the gray-green notes into the world's leading markets.

In the present situation, when world exporters of carbohydrates may receive a multi-billion dollar petrodollar profit that unexpectedly fell on their heads, the desire to go to refusal regarding the use of the US dollar, for obvious reasons, falls to an insignificant level. The Russian authorities are no exception here, because the hypothetical opportunity itself to get more than 70 billions of dollars of additional profit to the budget in just a few weeks makes your head spinning worse than any alcoholic beverage. Moreover, this manna can also pull out our budget in surplus - and this, as they say, is an additional motivation ...

The idea that the Americans need a war, mainly to maintain the position of a fairly underacted dollar, not supported by anything, is also confirmed by the fact that the Americans are not in a hurry to master their hydrocarbon reserves, which they have a lot of . After all, if the US political and financial elites of the United States focus on the domestic market and reject such an impressive amount of oil imports into the country (even if they are very expensive), then more and more countries will simply ignore the dollar. Like, if Americans decide to boil in their own juice, then let them mess around with their leaky budget and the dollar, and we will somehow bargain somehow ... And who then will provide the trillionth debt? ..

Fear of this and pushes Washington to the most seemingly useless military moves. Moreover, for certain circles, these steps, upon closer inspection, turn out to be very useful. When you need to save the reputation of the dollar, then Washington has to go for all the heartburn. And the military invasion of Syria in this case is just perfect.

By the way, in this vein, the half position of Barack Obama, who unexpectedly stated that a possible military operation by the allies in Syria will be carried out without declaring a no-fly zone over this country and will not even aim at overthrowing Bashar al-Assad, becomes understandable, and will become for the Syrian president “A rather powerful signal that it is better not to do that anymore” ...

It turns out that the goal of a hypothetical invasion is not at all Assad, who, as the same representatives of the Western authorities say, literally harassed the entire Syrian population with sarin ... And if not Assad, then who or what? And the goal is to pick up the dollar and again make most countries of the world fill up their reserves, if any, with this currency. If there are none, then once again show how great the role of the dollar is in trading in the modern market.
Apparently, 285 representatives of the House of Commons of the British Parliament, who voted against the invasion of British troops in Syria, thought: would we have any preferences to support your “gray-green”? .. If not, then somehow without us ...

But Russian liberal economists, apparently, according to the research of the Institute of Economic Policy named after Ye.T. Gaidar, all preferences for the Russian budget from Western military intervention against Syria have already been calculated, and it is hardly necessary to assume that they did not report “up” ... In this regard, if Moscow has any measures to counteract NATO’s hypothetical anti-Syrian aggression and Allies will cease to undertake, then it will be possible to summarize: the dollar wins again ...

Ctrl Enter
Noticed oshЫbku Highlight text and press. Ctrl + Enter
We are
Coming soon: oil at 70 dollars per barrelHow the US dollar turned into a big financial mystification
Military Reviewin Yandex News
Military Reviewin Google News
492 comments
Information
Dear reader, to leave comments on the publication, you must to register.