Hope for a miracle - and Russia 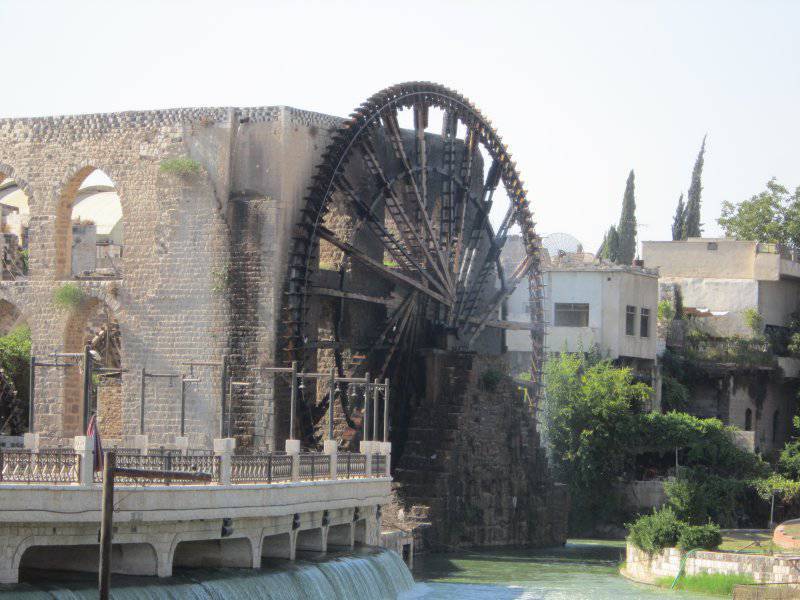 The Syrian city of Hama is rooted in the deepest antiquity. On the hill around which it is located, life existed as far back as the 5 millennium BC. In the old days, the city was called Hamataya. It is known to modern tourists as the city of norias - huge water wheels that moved the river Oront. With the help of special small bowls, as the wheel rotated, water rose from the river, then merged into a diversion chute, from where it flowed into aqueducts. Now, despite the fact that there is a modern water supply system, the wheels are still spinning. The largest of these, Muhammadia, with a diameter of 21 m, was built in the 14 century. It supplied water to the Great Mosque. 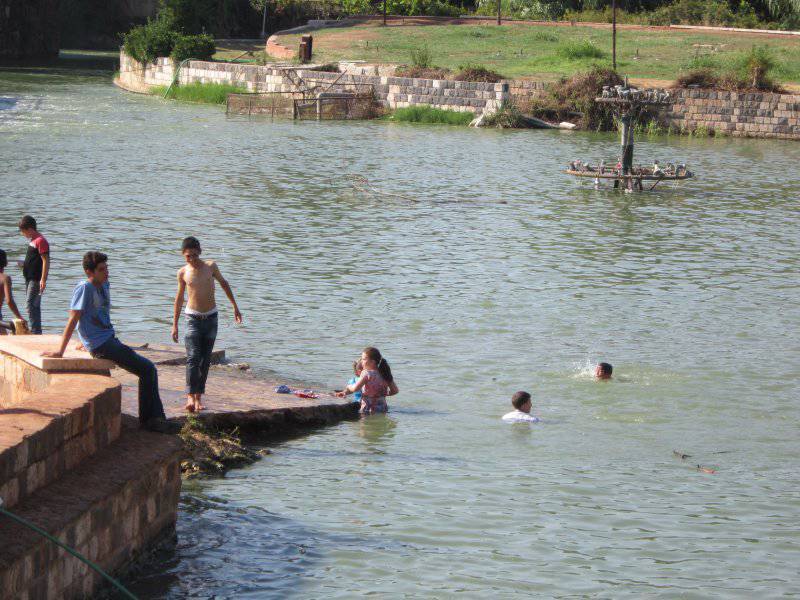 Before Syria was overwhelmed by a bloody wave of terrorism - many tourists flocked to Hama to look at the spinning wheels, the ancient palace of Qasr al-Azem, the Grand Mosque ... 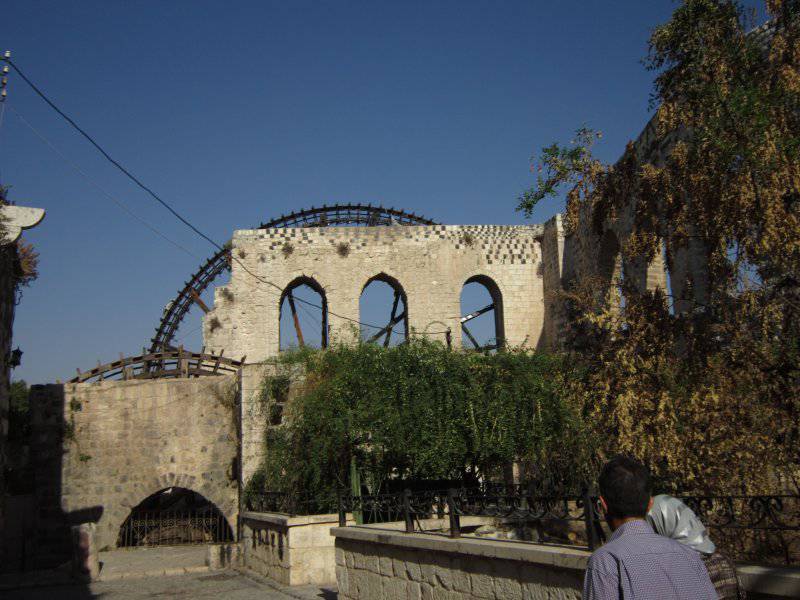 Now there are practically no tourists - the arrival of foreigners is perceived as exotic. Local boys surround visitors and want to take pictures with them. “Rusia, Rusia,” they shout cheerfully.
Children bathe in the Orontes River and jump from the base of a huge water wheel. The city lives its normal life. In the summer of 2011, gangs tried to turn it into their enclave. They worked unprecedented cruelty. In particular, they managed to seize the building of the police department. 20 police officers were brutally murdered. Their mutilated bodies were dumped from a bridge into a rivulet. At the same time, the terrorists themselves posted on the network a video clip on which they lodge over a supporter of the legitimate government, after which they hang it.
But such atrocities were taken by the “international community” for granted. The ambassadors of the USA and France came to the city of Hama, expressed support for the evil terrorists, and spoke of Hama as a "bulwark of democracy." Legitimate government introduced into the city Tanks, regained control. Oh, how then the world media broadcast that the “regime” was destroying Hama!
In fact, there is no destruction in the city. Due to decisive and quick actions of the country's leadership, the hotbed of terrorism was eliminated with minimal losses. Oh, how then the USA, France and other Western countries were disappointed that they did not succeed in turning the city into a center of terrorism! They hurried to break off diplomatic relations with Syria. 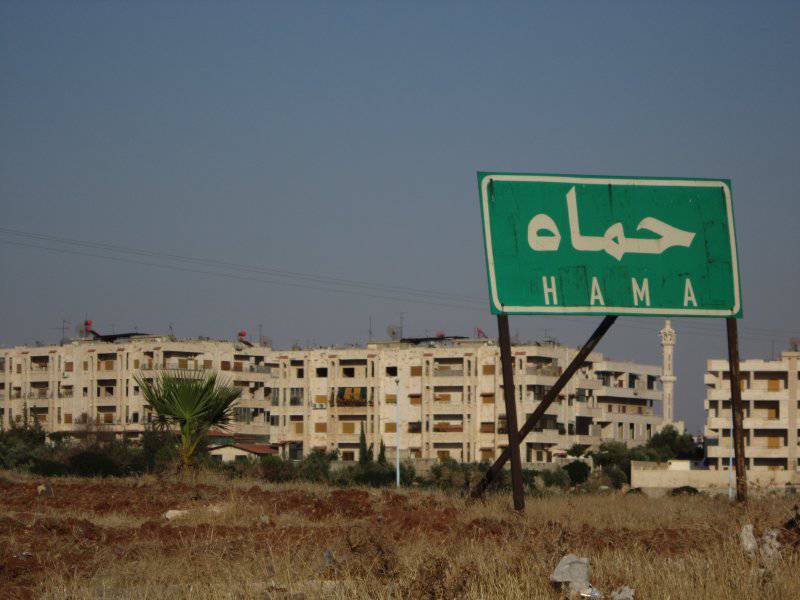 And now the city is alive, and its neat white stone houses quietly bask in the sun. This picture is very different from what happened in many other cities in Syria, where the terrorists managed to gain a foothold at least for a few months! There are dark ruins, watered with the blood of civilians executed by the "opposition", whose only fault was that they supported the law and did not want the power of terrorists!
The city of Hama was saved from this fate, including the efforts of Governor Anas Abder-Razak Naim, who was killed by 25 August terrorists. He was appointed to this position immediately after the hotbed of terrorism was eliminated. I happened to meet him in person.
This was in November 2011 of the year. Our delegation visited Hama. Then, due to lack of time, we could not see the sights of the city, but we were hospitably received by the governor in the beautiful city hall. He shook everyone's hand, answered the delegates' questions. I remembered him as a pleasant and affable person, although very tired - in the city and in the country even then there were a lot of problems ... 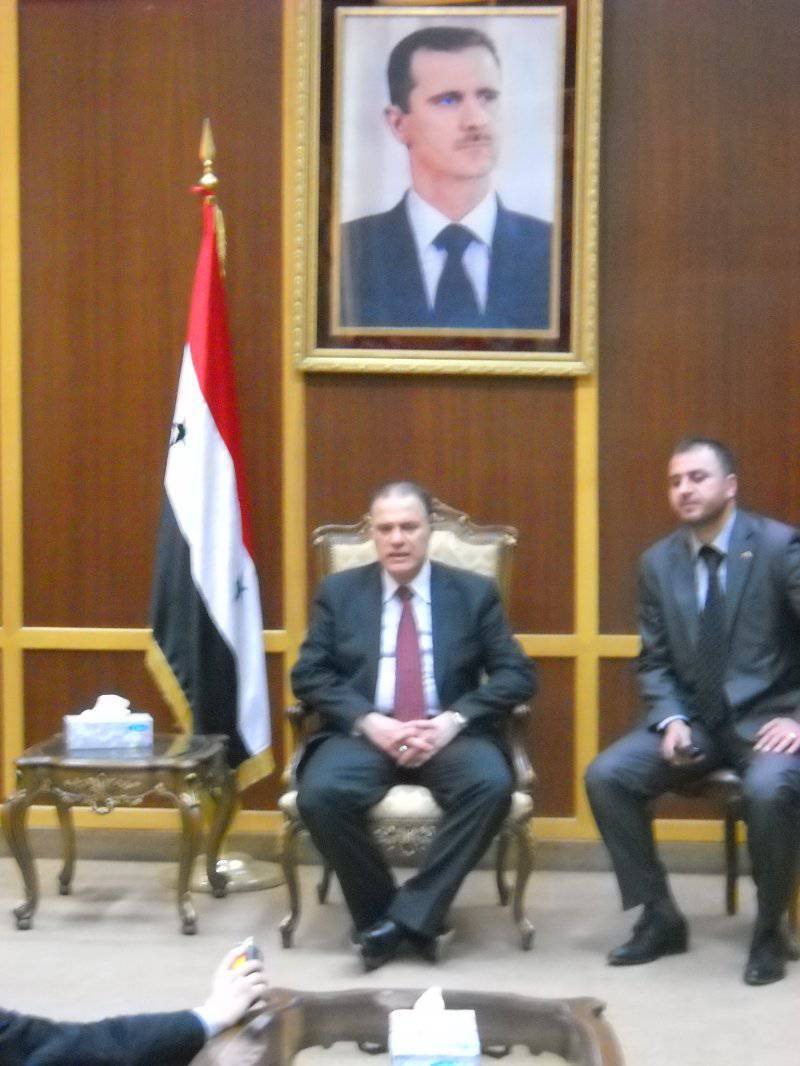 During this time, leaders of many provinces were replaced. But the governor of Hama remained in his post - this suggests that he brilliantly carried out his duties.
The murder occurred in the area of ​​Jaraim, on a quiet street, not far from the Old Town. Terrorists left a mined car on the sidewalk. Probably the explosive device had a remote control. It was stuffed with striking elements, such as metal balls or nails - a pillar standing next to the explosion site was riddled with them. Moreover, the blow was very precisely directed. 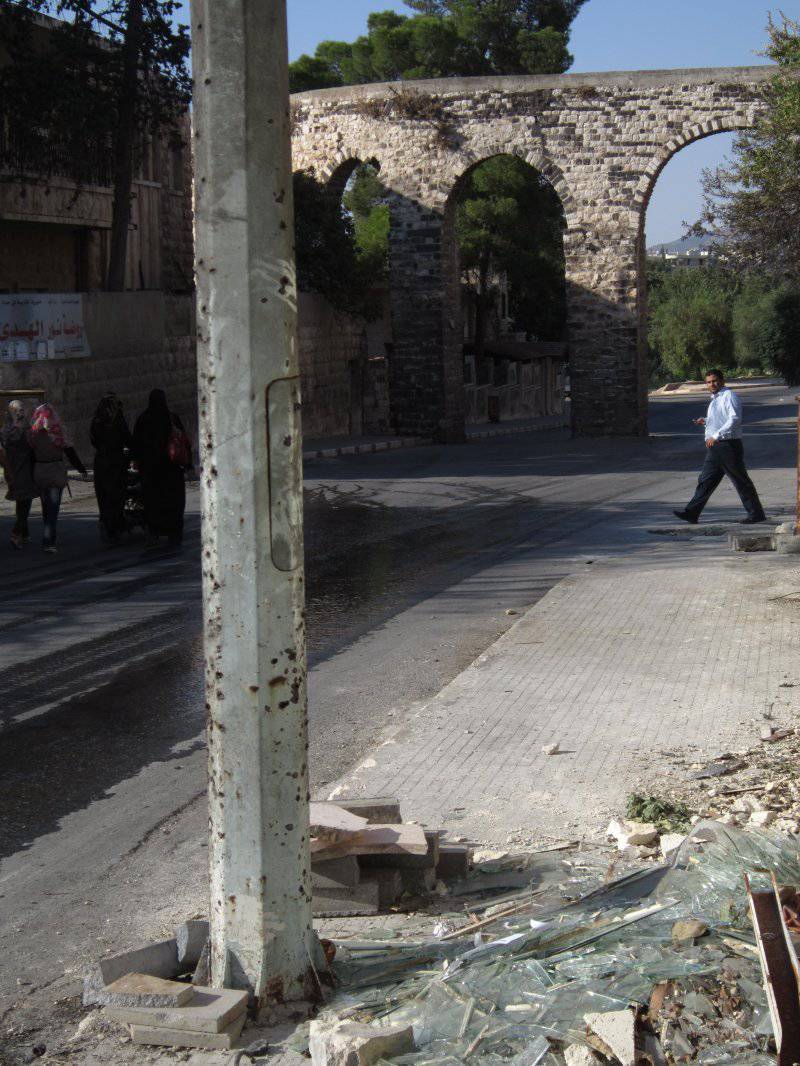 The governor of the province of Hama was born in 1962 year. He was a doctor by profession. It is not by chance that now, in these difficult times, many doctors are among the leaders of Syria, including President Bashar Al-Assad himself. Apparently, this is a sign that the world needs healing, and Syria should play a huge role in this ...
Locals say that the governor was very attentive to ordinary people. He took them as a true doctor takes his patients. I listened, helped ...
Supporters of the Syrian "opposition" say that, they say, the Alawis have power in the country, who allegedly oppress the Sunni majority. Nothing like this! In particular, this proves the example of Anas Abder-Razzak Naim, who was from a very respected Sunni family. Among his relatives were two very respected Sunni religious figures, and therefore many residents did not think that the bandits would kill him. But they kill everyone - Sunnis, Alawites, and Christians. And especially - people of business, strong business executives, good specialists, in order to exsanguinate the country, to deprive it of the best national personnel.
There is an opinion that people who are in power are in a certain privileged position, they are far from the people. But not so was the deceased. There are situations when a chair turns into a cross ... And a very heavy cross, the carrying of which ends tragically ...
The funeral of the governor, who honestly performed his duty to the Motherland, turned into a demonstration. Minister of National Reconciliation Ali Haydar arrived, who, on behalf of the President of the country, expressed deep condolences to the relatives of the fallen and residents of the city of Ham.
And the city continues to live its life, and the huge water wheels still squeak as they did hundreds of years ago. The melancholy sounds they make are so sharply contrasted with the harsh, deadly roar of explosions ...

Until the trigger is not released 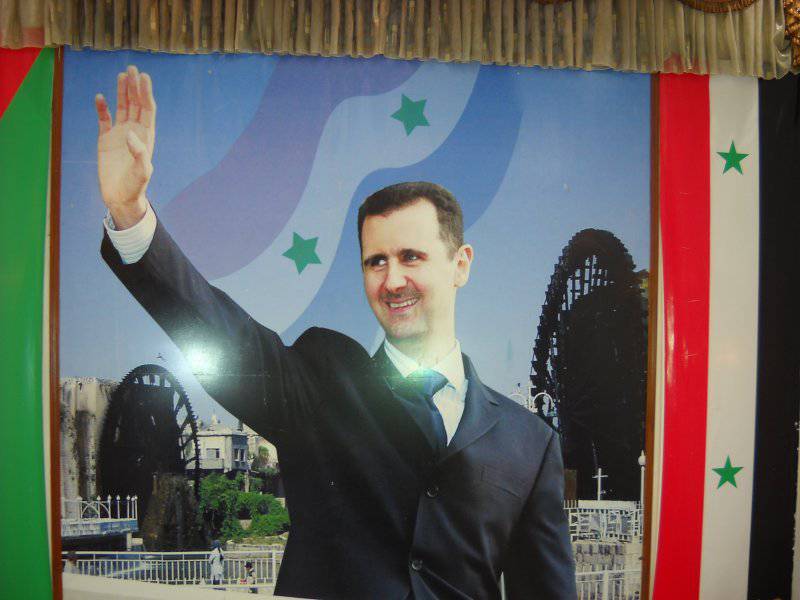 All this week, threats of foreign invasion are being heard against Syria. Louder than all, as in the situation with Libya, France screams. As for Britain, its parliament voted against the intervention.
The blows were expected already these days. Residents do not panic. Here they are accustomed to blood and death - the terrorists killed so many people that there was not a single family left that did not lose a relative. The blows of the United States and NATO, of course, will kill much more, but the weak have long gone. The rest are ready for anything.
The so-called "opposition leader" Ahmad Zharba called on the United States and Western countries to strike at Syria. He does not mind that so much of everything beautiful will burn in the fire of devilish aggression! It’s not a pity that a country that has already been turned into a “hot spot” by terrorists can turn into a complete bloody hell. He hopes to gain power over the ashes.
France made a statement that the strike is preparing 4 September. Earlier it was said that it will be applied 29 August. But the night on which the bombing was expected was calm.
At this time, the Russian ships are pulling up to the Syrian coast, and the inhabitants of the country once again enthusiastically say, "Thank you, Russia." The country is engulfed in vague hopes that the punishing hand will stop at the last moment. If not, there will be resistance. Even to cope with Libya, which is much worse armed and had a relatively small army, NATO took almost a year ...
Yes, in the case of aggression victims will be many. But Syria will survive and win. While the trigger has not yet been released. There is still a little time to stop the madness. To save lives and a centuries-old civilization is the cradle of humanity. Hope for a miracle - and Russia ...

Ctrl Enter
Noticed oshЫbku Highlight text and press. Ctrl + Enter
We are
Ban flights to Egypt. What happened to the plane and what awaits the Russian tourist business?Bashar al-Assad: In Syria, not the “revolution” that the enemies are talking about, but the revolution of the army and the people against terrorists
Military Reviewin Yandex News
Military Reviewin Google News
254 comments
Information
Dear reader, to leave comments on the publication, you must sign in.