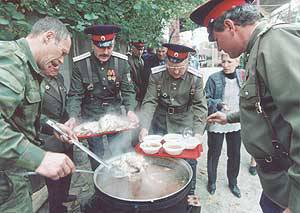 
I once liked the name of Oleg Chuvakin’s heading - “Geopolitical Mosaic” - comprehensive, figurative and intelligible. And I want to present my point of view and find allies (or “fossilize” enemies) on many issues of current geopolitics. Moreover, the material - to the throat. So I ventured on such a headline and I hope that many will be able to understand the mood and the train of thought. Well, the presence of the word "Cossack" due to my nickname on the site. Do not blame me. So, slurp ear ...

Today in Novosibirsk there are frequent rains. The mood is nasty and, like the weather, dank. Moving home, dampening at work (we hasten to finish the cycle of work, going to meet the wishes of the customer and catching the intervals between the “visits” of rain), drove home with the only thought - to warm up and eat. I love this state, as well as waiting for a warm hearth (this is figuratively) in the winter cold, when you start to freeze, but you know that you will not have to freeze, but you will have to enjoy the home heat.

So ... Food, and the thought itself “how is Obamka ours, friend of ours, feels after a disgusting demarche of the Aglitsa Parliament?” And besides this thought, there is also a dream of a somatic hrenovuhi created by our own hands.

This is my first sin ... I bungled Hrenovuha myself according to the recipe that was watched in the "OKO PLANETA", I personally embodied it and reap the "fruits" of my works. The thing is awesome and clogs with its “native roots” (horseradish roots) all sorts of pompous cognacs and tequila. Take a word.

The second sin ... While driving home, looked into the Internet and found newsthat the Prime Minister of England declared that he did not intend to apologize to Mr. Obama for the fact that Parliament had denied Cameron the pleasure of waving his baton over the heads of the Syrian people. And so, in connection with this, I remembered the behavior of David our Cameron at yesterday’s meeting of the English Parliament. Hysterical, colleagues, sheer hysteria and bustle from the fact that the situation got out of control and will have to answer to the “big brother” for not having goggled, not done, not finished ...

And, in this connection, a projection of relations between statesmen on the everyday situation arose, when a presumptuous hooligan, believing in his power from the fact that others prefer not to get involved, crosses borders and begins to download his foul words to the right and left. Until he stumbles upon a mocking glance of a detached, calmly looking boy, who gazes at the unleashed bawdy and scoffing at the fact that the boulder can come full kirdyk from this guy at any moment.

I repent myself twice in my life with such a mocking look that provoked the “zalupon” of the unleashed hooligan, after which he was engaged in his “upbringing”. It worked - trouble free. These are exactly the associations that cause Obama and Putin’s position on the “Syrian issue”.

There is nowhere to retreat! AHEAD - DAMASSK!

No, no, colleagues! I was not mistaken. You remember the words of the political instructor calling on the soldiers to stand to die in the face of the fascists rushing towards Moscow - “There is nowhere to retreat! Behind - Moscow! "

Thank God, today these words do not sound like battles taking place on the far approaches - in Syria. It was these words of the Soviet political instructor that I remembered when I read the headline on the Internet today: "Moscow will defend Damascus to the last". Where was the interview given by Assistant to the President Yuri Ushakov that Moscow was making efforts and would make every effort to ensure that her company could not crush her ally.


BROTHER, AND THE SHOCK SHOCK ARE RIGHT HERE HERE, DIRECTLY AT THE BASURMANIN'S TEMPLE ...!

Appeared on the Internet and the answers to the sarcastic question, “Well, how can Russia help Syria? @ / Besides the fact that the Syrian Army is armed with modern anti-aircraft weapons (along with rather morally outdated VT models), Russia can help Syria control the airspace, and this, you see, is not enough in modern military realities. Knowing where the next American racket fluttered, carrying "the light and joy of progress and democracy" - this is more than half the story. But to destroy this carrier of democracy in the Syrian Army today, is what.

This kind of fraternal and sensible help reminds me of the instructions of a seasoned and seasoned warrior who passes on his experience to a green young man who dreams of chopping heads of an infidel. So the picture is seen as a mature warrior directs the hand of the young for a truer strike - “To strike with an ax directly here syudy, in temechko or between the eyes! So it will be more true, mate! ”

Misery can not estimate the greatness of personality

What am I talking about, colleagues? I’m talking about how a nonentity by the name of Navalny in his Banderlog fuse touched the name of a man who did so much for our country that he couldn’t make thousands of such bad guys like Alyosha Navalny. In one of his posts, this outrage dared to open his mouth to Marshal Zhukov, saying literally the following: “33 a year ago, the scum and marshal Marshal Zhukov died. I will despise the people who tolerate his monument on Red Square. Spelling and syntax are preserved as they are - without respect for the name Red Square, without punctuation and other "subtleties." For us, the fact itself is important - scum, this is the offspring that hatched into the light of God. Despite the common sense and the fun of the hamster herd. And this scum is called Alexei Navalny and this scum is crucified about the care and aspirations of the Russian people, waving, in the mud, the name of a person who brought peace to our country and Victory, which we will be proud of for decades to come, with its talent and dedication.

You can find out about the “feat” of the candidate for mayor of Moscow here on this link, colleagues: http://politikus.ru/video/5899-navalnyy-mer-nu-nu.html

Sincerely. ESAUL
Ctrl Enter
Noticed oshЫbku Highlight text and press. Ctrl + Enter
We are
About Stalin and KhrushchevWhat you didn't want to know about England
19 comments
Information
Dear reader, to leave comments on the publication, you must to register.