Salaries and prices up to 1917 year 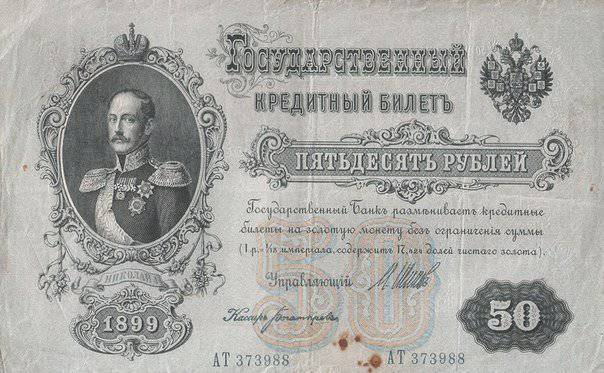 1. Workers. The average salary of a worker in Russia was 37.5 rubles. Multiply this amount by 1282,29 (the ratio of the tsarist ruble to the modern) and get the amount of 48085 thousand rubles to the modern conversion.

14. Privy Councilor (official of the highest class) 500 or 641 145 for modern money. The same amount received by the army general

Now let's see how much it cost to rent a house. Rental housing cost in St. Petersburg 25, and in Moscow and Kiev 20 kopecks per square arshin per month. These 20 kopecks make up today 256 rubles, and square arshin - 0,5058 m². That is, the monthly rent of one square meter was worth in 1914, the 506 of today's rubles. Our clerk would rent an apartment of one hundred square arshins in St. Petersburg for 25 rubles a month. But he did not rent such an apartment, but was content with a basement and garret closet, where the area was smaller, and the rental rate was lower. Such an apartment was rented, as a rule, by titular advisers who received a salary at the level of an army captain. The bare salary of a titular adviser was 105 rubles per month (134 thousand 640 rubles) per month. Thus, the 50-meter flat cost him less than a quarter of the salary.

Well, now let's talk about how the recalculation for modern money is made on the example of the clerk (petty official) salary. In rubles, his salary was 37 rubles and 24 and a half pennies. In those years, there was a gold standard, and each ruble contained 17,424 fractions of pure gold, that is, 0,774235 g in terms of metric measures. Therefore, the clerk's salary is equal to 28,836382575 gram of gold. If we divide this weight into the current gold content of the ruble as of 28 in January 2013, we get 47 758 rubles and 89 kopecks. As you can see, the royal ruble is equal today 1282 to modern rubles 29 kopecks.

Ctrl Enter
Noticed oshЫbku Highlight text and press. Ctrl + Enter
We are
The development of the military-industrial complex of the Russian Empire in the years of WWIFrom the history of own names of aircraft of Russia, 1885-1917 years
Military Reviewin Yandex News
Military Reviewin Google News
153 comments
Information
Dear reader, to leave comments on the publication, you must to register.