US and Chinese arms race in space 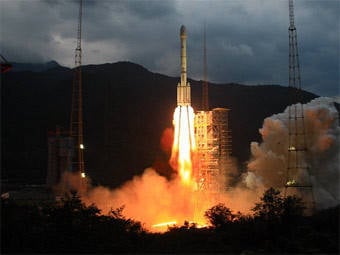 The space weapons race, which was conducted by the USSR and the USA, was continued, only now the USA and China. Russia now, like the rest of the world, has the role of observers.

What is interesting is that the United States practically violates the treaty that outer space should remain outside military targets. The USSR and the USA, within the framework of the ABM Treaty, from 1972, agreed that space would be free from weapons.

WikiLeaks unveiled a new batch of “sensational” materials, according to them, the United States and China are pursuing a space arms race and have been in conflict several times, so far only verbal.

In January, the 2007 of the year, the armed forces of the People's Republic of China successfully destroyed their satellite, at an altitude of 850 km., After conducting a test of a ground-to-space missile. In Washington, this caused concern, because Beijing has demonstrated the ability to shoot down American communications satellites, without which the US armed forces would partially “go blind.” The United States secretly asked the People's Republic of China not to conduct more similar tests. In 2008, the States officially sent a note of protest to Beijing, which said that China’s testing of ballistic missiles threatened US and other space objects. US Secretary of State Condoleezza Rice said the Pentagon could use force to protect its space objects.

"Any intentional interference with the work of American space systems will be perceived as an infringement of rights and an attempt to escalate the conflict," the Daily Telegraph quotes the text of the protest note.

The United States in February 2008, successfully "answered" - their anti-satellite missile hit an American spacecraft. Beijing said it doubted that the American satellite was defective. Washington and Beijing negotiated for several months, but the United States could not convince the Chinese to stop testing their missiles. The last test took place in January 2010, when the Chinese shot down another missile in space.

Hillary Clinton sent a note of protest and demanded to answer the question - why does China develop such systems. In response, China accused the States of creating laser weapons capable of shooting down Chinese missiles over their territory.

The position of Moscow that the militarization of space is not permissible is an anachronism, the position of a cartoon ostrich that hides its head from danger. The United States and China have already created weapons capable of destroying enemy space objects. They are also in full swing creating fighters capable of acting, both in the atmosphere and beyond.