August 30 2013
18
Design Bureau "KB Indel" from Belarus will present its promising robotic helicopter-type UAV "INDELA-IN.SKY", which is being developed in the interests of the Air Force and Land Forces. The drone will be presented on the static platform MAKS-2013 as part of the aircraft and its control systems. According to the chief designer of the enterprise, Vladimir Chudakov, the INDELA-IN.SKY UAV complex (3 vehicle, as well as ground support equipment) is the first commercial product of the company that is designed to obtain various kinds of information online at distances up to 60 km . With its own weight in 86 kg. This unit can fly at speeds in 70 km / h for 5 hours. The drone is made according to a single-rotor scheme with a tail rotor and allows installation of various target loads to solve a wide range of tasks.


Belarusian “KB Indel” was founded in 1996 year. The main activity of this enterprise during the first years of its existence was the development of high-speed data transmission systems and telemetry. Starting from 1999, the design bureau carried out work on the creation of a unified modular control system (ground control station and onboard equipment) of prospective robotic UAVs created in the interests of the ground forces, air forces and their ranges. Some of these projects implemented by Belarusians initiated the idea of ​​developing their own robotic small-sized in-vehicle UAV with vertical take-off and landing.

According to Chudakov, over the next 5 years, the Minsk KB expects to reach the level of such leading world companies as IAI, Shibel and Raphael in the UAV development segment. According to the chief designer of the enterprise, at present the main products in the line of enterprise UAVs are the 3 apparatus — the INDELA and Grif UAVs, as well as the target aircraft (Berkut).
Vladimir Chudakov stressed that "today our company is among the six largest world companies engaged in the production of commercial products in this line." At present, KB "Indela" already has a package of orders for 26 complexes and is negotiating the supply of INDELA-IN.SKY UAV for a number of contracts totaling several tens of millions of dollars.

Also, Belarusian designers are working on the creation of an apparatus of mass 200 kg., Which will be designed for military use. According to Chudakov, the INDELA-IN.SKY UAV is 4 times cheaper than similar drones manufactured by the Austrian company Shibel and is equally capable of solving the same tasks. In addition, the Belarusian-made unmanned helicopter, unlike the Austrian counterpart, can be repaired directly in the field.

The unmanned helicopter is able to carry a payload weighing up to 30 a kilogram, its tactical range is 100 km. The helicopter is equipped with a navigation system using neural network algorithms. Observation equipment installed on the two-axis gyro-stabilized platform created by Belarusian specialists, which can be attributed to the Belarusian know-how. It is worth noting the fact that the CB "Indela" is the only company in the post-Soviet space, which is engaged in the production of such complexes based on an unmanned helicopter weighing up to 200 kg. The main advantage over their competitors Belarusians consider the relatively low cost and full warranty technical support of the device. In today's environment, these benefits can be decisive.

The multifunctional remote monitoring complex with a medium-range UAV “INDELA-INSKY” is intended for conducting round-the-clock monitoring of industrial facilities, certain territories, ships, vehicles, groups of people and individuals. It can be used to monitor power lines, conduct search operations, control the fire situation, aerial photography of the area, etc. The UAV is designed to transmit to the ground control station (NSO) a television signal in real time in the infrared range and in video in direct line of sight from the control point. 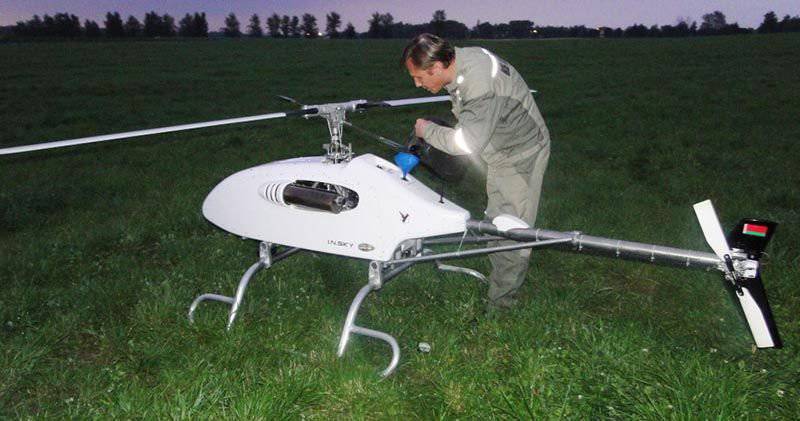 The bespilonika design, at the request of the customer, allows you to mount in the compartment for the target load various additional equipment, thereby greatly expanding the scope of use of the complex. The INDELA-INSKY design allows you to install various payload options and build up flight navigation equipment. As the ground equipment of the complex is used NSO, which includes all the necessary components for the rapid diagnosis of equipment and programmed flight control. The unmanned helicopter is designed according to the classic single-rotor scheme with a tail rotor.

The ground control station (NSO) is designed to control the UAV’s flight and the payload installed on it, process, receive, display and document information from the UAV and ensure information exchange with external consumers. The unmanned helicopter is intended for delivering target load equipment to a given area, ensuring the equipment is operated by commands from the NSO or on-board computer, and the transfer of specific information to the NSO online or from on-board drives.

NSO provides:
- exchange of real-time telemetry information with the drone;
- conversion and subsequent display of telemetry information on the screens of monitors in the form of graphic images and text;
- management of flight modes of the device and the work of the payload;
- automated preparation of the flight task of the UAV and its input into the on-board computer;
- control of the technical condition of the onboard complex; 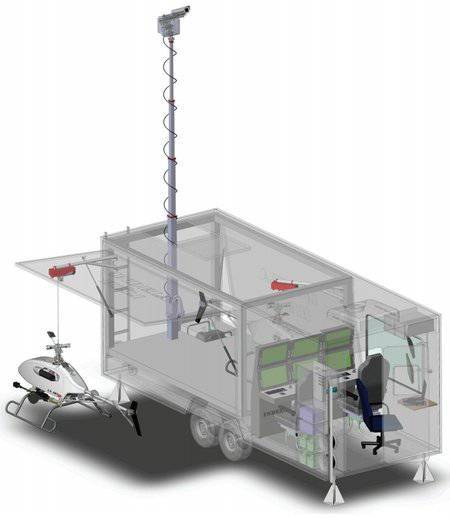 The complex is equipped with a convenient waypoint editing system. In the event that the user has access to the Internet, he does not need any other maps for editing the lists of waypoints, for planning the mission and for autonomous flights. The software was translated into Russian, English and Spanish. At the same time, at the request of the customer, the software complex can be translated into any language.

The INDELA-INSKY drone helicopter with a gyro-stabilized optical-electronic system equipped with an Indela OGD-20HIR infrared camera and a radio search system that is designed to search and detect a UAV that made an emergency landing - 2 pieces.

Repair kit «INDELA-INSKY». The repair kit is designed for prompt repair and maintenance of the drone. It includes: a set of spare parts, tools, accessories and materials for carrying out the repair of a drone - 1 kit.

The ground control station INDELA-GCS, which is located in the Kupava car trailer. The Kupava trailer consists of 2 compartments: the control compartment, whose life support system includes a heating device, an air conditioner, a ventilation unit, and a sealed compartment that has special slipways intended for transporting and storing UAVs - 1.

Automatic antenna orientation system with a telemetry channel INDELA-ATA 5800 and an additional video camera on the antenna positioning system for visual monitoring during take-off and landing of a drone. - 1 thing.

Field auxiliary kit containing equipment and tools for the deployment and maintenance of UAVs and NSOs in the field, as well as a set of fire extinguishing agents - 1 kit. 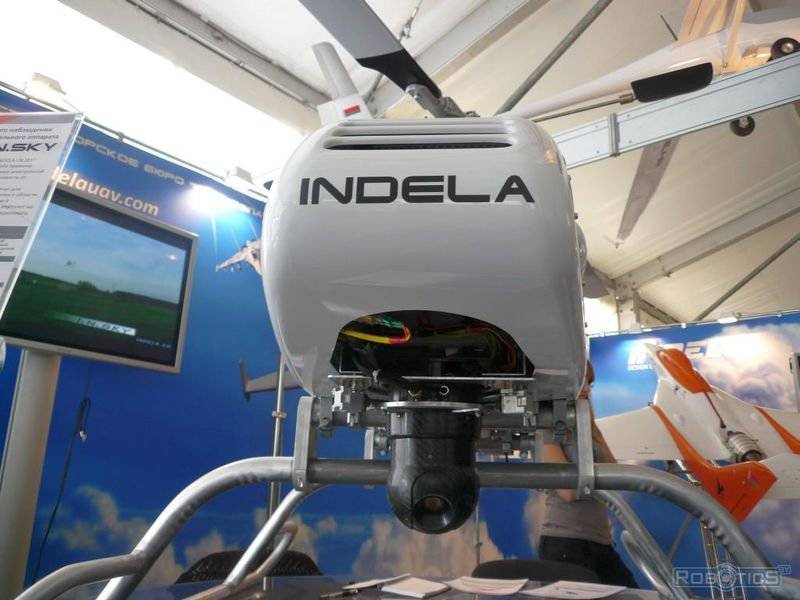