18 signs that Russia is rapidly catching up the US 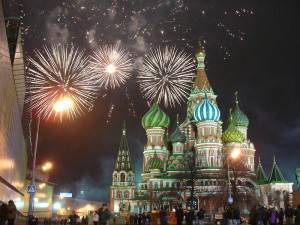 The Russian Bear is now stronger and more powerful than he has ever been before. Unfortunately, most Americans do not realize it. They still regard Russia as the “former superpower”, which has lost its power with the end of the Cold War. Yes, by the end of the Cold War, Russia was not in the best shape. (The author of the article had a chance to go there in the early nineties), and at that time Russia was an area of ​​economic disaster. The Russian currency was so devalued that the author joked that if he exchanged 20 dollars, he could buy the Kremlin. However, since then, Russia has been reborn. Since Vladimir Putin became president of the country, the Russian economy has begun to grow rapidly. Today, Russia is an economic giant that has at its disposal an abundance of natural resources. Their GDP debt is extremely small; moreover, every year the country comes to trade surpluses, and the Russian armed forces occupy the second place in terms of power throughout the world. Everyone who currently underestimates Russia is making a big mistake. Russian Bear is back, and today he is a more formidable opponent than he was in any of the stages of the Cold War.


Take a look at the proposed statistics. Below are 18 signs that Russia is catching up with the US ...

No. 1 Russia produces more oil than anyone else on this planet. The United States ranks third.

№ 2 Russia is in second place for the export of oil in the world. The United States is forced to import more oil than anyone else.

No. 3 In the largest quantities on the entire planet, natural gas is extracted by Russia. The United States in second place.

№ 4 Today, Russia supplies 34 to Europe with a percentage of the total natural gas required by the country.

No. 6 Last year, the US trade deficit was estimated at more than half a trillion dollars. Russia consistently receives a large trade surplus.

№8 Since Vladimir Putin first became the president of Russia, the country's economy has grown very quickly. Shown below are taken from Wikipedia.

During the eight years of Putin's rule, industry has grown by 75 percent, investment has increased by 125 percent, and levels of agricultural production and construction have increased. Cash incomes more than doubled, and the average salary increased eightfold, from 80 to 640 dollars. Between 2000 and 2006, consumer loans increased 45 times, and in the same time period, the middle class grew from 8 to 55 million, which is a sevenfold increase. The number of people living below the poverty line has decreased from 30 percent in 2000 to 14 percent in 2008.

№9 According to the American news site Bloomberg, over the past decade, Russia has added metric tons of gold to its 570 reserves. As for the US, there is no one who knows exactly how much gold is actually left in the Federal Reserve.

Number 11 More billionaires live in Moscow than in any other city on earth.

No. 12 The Moscow Metro completely surpasses the metro systems of Washington and New York.

No. 13 The US Army is the strongest on the planet. But the Russian army is in second place.

No. 14 Russia introduced a new “almost silent” nuclear submarine, which is much quieter than anything that the US has ever developed ...

The submarine of the Borey project, named Vladimir Monomakh, is equipped with a new generation nuclear reactor and can sink to a depth of more than 1200 feet, as well as transport up to twenty nuclear intercontinental ballistic missiles (ICBMs).

Each of these ICBMs, called the Mace, can place in itself ten removable separable warheads, called in Russia “missiles returning to the dense layers of the atmosphere”, each of which is capable of transporting hypersonic nuclear units of individual guidance weighing up to 150 kilotons.

No. 16 In the second half of 2013, 200 military exercises will be held in the Russian missile forces.

No. 17 As Prime Minister of Russia, Vladimir Putin was mentioned in press headlines around the world when he climbed into the cockpit of the “fifth generation” Russian fighter and said that this fighter is far superior to the F-22 Raptor.

No. 18 According to the latest estimates, there are more Russian spies in the United States now than during the Cold War.

From the author: Unfortunately, whenever I write an article about Russia, I later learn that most people do not understand its meaning. They make comments like “The cold war is already over” or “Russia is our friend”, which shows a complete lack of understanding of the current geopolitical situation.

Russia is continuously strengthening relations with China, and together these two countries pose the number one threat to the United States.

Someday, it will become quite clear to the American people. It remains to hope that by the time of this awareness it will not be too late.

Ctrl Enter
Noticed oshЫbku Highlight text and press. Ctrl + Enter
We are
Situational analysis of the death of the MH17 flight (Malaysian Boeing 777), made on the basis of engineering analysis from 15.08.2014Results of the week. “Do what you want, but in half an hour in the forest it was light, dry and bear!”
Military Reviewin Yandex News
Military Reviewin Google News
147 comments
Information
Dear reader, to leave comments on the publication, you must to register.