Russia claims to have a significant share of the UBS world market already in the short term, the United States can prevent 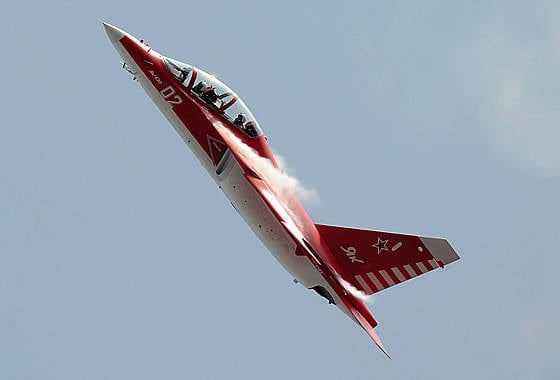 If the announced intentions of a number of traditional importers of Russian armaments for the purchase of reactive UBS will be realized, the Yak-130 already in the short term may take a leading position in the global market in this segment.


These plans can be hindered by the military aggression of the Western countries (USA, UK, France) against Syria, which is the largest customer of the Yak-130UBS (36 units, the order amount is about 550 million dollars) for the near term (now the Syrian air forces are training pilots on Czech aircraft L-39 "Albatross").

It is noteworthy that one of the key topics at the MAKS-2013 air show, according to the press service of Rosoboronexport, is the marketing campaign to promote the Yak-130UBS. According to the Russian special exporter, “Ukraine and Kazakhstan can become potential customers of the Yak-130. The issue of attracting local enterprises for servicing these aircraft is also being worked out with Kazakhstan partners. ”

Russia is entering the dynamically growing world market of reactive UBS very timely. The growth in global sales is due to the fact that many "poor" countries prefer UBS purchases over expensive multi-purpose fighters.

In the forthcoming four-year period (2013-2016), the sales volume of the new reactive UBS will be 292 units. in the amount of 7,964 billion dollars in the case of meeting delivery schedules for current contracts, stated intentions and tenders.

At the moment, according to TSAMTO, for the period 2009-2016. with UBS Yak-130 Russia with sales plans for about 80 machines worth 1,65 billion dollars, in terms of quantity, 3 occupies a place in the ranking of the largest exporters in this market segment.

In 2009-2012 16 Yak-130UBS (Algeria) was exported at a cost of about 200 million dollars. In 2013-2016 sales can be up to 64 units. in the amount of 1,45 billion dollars (here both deliveries under the concluded contracts, and declared intentions with an estimated delivery time in the period under review are taken into account). Moreover, of this volume, more than half (36 units) falls on Syria.

In the "offset" of Russia for the period 2013-2016. Included deliveries under contracts with Syria and Belarus. In the case of the development of the situation around Syria in the worst case scenario, a large contract with Syria on the Yak-130UBS (as in the MiG-29М / М2) may not take place. Moreover, losses in Russia under these two contracts will be very substantial. The presented calculation is made based on the fact that the contract with Syria on the Yak-130UBS will be implemented.

In addition, the intention to supply the Yak-130UBS for Bangladesh (the contract has not yet been concluded), and also Vietnam, may be taken into account (Hanoi should decide on purchases in the near future, since the fleet of Su-30MK2В fighters as part of the Vietnamese Air Force in the last years has grown considerably). In the short term, Belarus may receive an additional order for the supply of Yak-130UBS. In the medium term, Ukraine and Kazakhstan may become potential customers. Russia also has certain chances in Uruguay.

In a more distant future, the list of countries that may show interest in the purchase of Yak-130UBS (this does not mean that the countries listed below will necessarily become customers of Russian planes, but that you can work with these countries ), TSAMTO included Algeria (second party to replace L-39), Brazil, Venezuela (there will be tough competition with China), Vietnam (second party, if the first is ordered in the short term), Ghana, Jordan, Iran (if canceled embargo), Yemen (in the case of normalization of si uatsii in the country), Libya (in the case of normalization of the situation in the country and the lifting of the embargo), Malaysia, Sudan, Peru, Thailand.

This list does not include a number of promising countries where the Yak-130UBS have chances, but they are not included in the review, based on financial constraints of the budgets (a number of countries in Africa, Latin America and the Southeast Asian region), or because of other countries. That is, in general, the group of potential customers is wider than it is presented above.

As of the current time period 2009-2016. China ranks first in terms of the number of delivered and planned for delivery of reactive UBS (170 machines worth 1,85 billion dollars). In 2009-2012 It was exported and licensed for 146 aircraft worth 1,57 billion dollars. Order portfolio for the period 2013-2016 24 is still new machines in the amount of 280 million dollars. Such a significant difference in the two 4-year periods for China is a temporary phenomenon, which is associated with the transition to an active marketing policy to promote the new L-15 UBS on the world market.

UCS K-8 “Karakorum” is a rather outdated machine, therefore, Beijing associates further prospects for maintaining its position in the world market with its new development L-15.

In November 2012, the company "AVIC Hundu" concluded with China National aviation import-export corporation (CATIC) contract for the supply of 12 UBS L-15 as part of the first export order. Officially, the first customer is scheduled to be announced this year.

Potential customers of L-15 consider, first of all, those countries that are operators of K-8 "Karakorum".

Preliminary negotiations on the supply of L-15 held with the Air Force of several African countries, including Namibia and the DRC. The Venezuelan government has also evaluated the possibility of acquiring L-15.

Comparison of potential customers of China and Russia suggests that in many countries Yak-130UBS will compete, first of all, with L-15.

The main customers of UBS "Hawk" of various versions at the moment are Australia, India, Oman, Saudi Arabia, South Africa.

A very strong competitor in the near future can become South Korea with Golden Eagle.

The first export contract with Indonesia for the supply of Golden Eagle UBS T-50 has been concluded (16 units). The next customers are expected to be the Philippines (12 units) and the UAE (20 units).

Traditionally, Italy is a very strong competitor in this segment of the market; in some regional markets, the Czech Republic can compete.