The characteristics of the new aircraft missiles improved twice 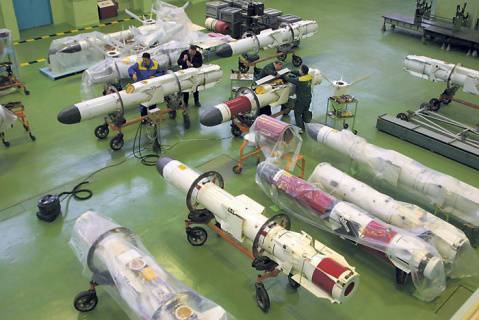 To date, the corporation has included the military-industrial company Scientific-Production Association of Mechanical Engineering (MIC NPO Mashinostroyenia, Reutov), ​​which includes a number of enterprises located mainly in the Urals.

How has the company's activity changed since its new consolidation, with which the corporation’s enterprises come to MAKS-2013, NVO correspondent Viktor MYASNIKOV, Boris Viktorovich OBNOSOV, general director of Tactical Missile Weapons Corporation, asked.

- Boris Viktorovich, tell us about personal impressions after meeting with enterprises of the military-industrial complex NPO Mashinostroyenia.

- Impressions exceeded all expectations. We lobbied for this association from purely pragmatic interests, understanding that the military-industrial complex NPO Mashinostroeniya is a good design school, which in its developments, if not completely identical, then has much in common with our scientific and technical ideas. And given the fact that, like everywhere else in the defense industry, there is an acute shortage of qualified design personnel, the unification should have had a consolidated effect. Especially for high-speed products. In addition, NPO Mashinostroeniya has a sufficiently developed technological base.

The first interaction experience confirmed the significant potential that corporations entered into the corporation have. Now, instead of building new plants, as some companies are trying to do, you can use the capacities that are available.
Quite large formed teams came to us. After getting acquainted with their capabilities, we have already managed to seriously load a number of enterprises. First of all, this refers to the Orenburg PO “Strela”. The general director of the company, Alexander Matveyevich Markman, made a very strong impression.

We expect a similar effect from the interaction of test bases. Combining the base of NPO Mashinostroenia with the testing and laboratory bases of Raduga, the head site of Zvezdy - Strely, Vympel and Region will expand the overall potential of the combined company.
In view of the opportunities that have opened up, we have made changes in a number of projects planned under the LG-2020. This also applies to the assembly base. An enterprise like Mashinostroitel in Perm opened our eyes to many issues that, unfortunately, we still did not own. The result of familiarization with the "Mashinostroitel" will be its powerful reloading.

I will note one more direction, which is successfully developing by the enterprises of NPO Mashinostroenia. We are talking about the field of composite materials - protective and structural. I believe that further consolidation of efforts within the framework of the corporation in many areas is very promising.

- Today, within the framework of the Federal Program for the Development of the Military-Industrial Complex at the enterprises of the corporation, more than 100 projects are being implemented aimed at modernizing technological equipment. A machine park is being gradually retooled, a new modern electroplating shop has been commissioned, and overhaul of production facilities is being carried out. In September, a new laboratory and design complex (LCC) will be commissioned.

FTP is a very serious program of the state. It would be impossible to upgrade the machine park and switch to new technologies, relying only on our own funds. Nevertheless, from my point of view, I would like to note that I would like to increase the volume of investments in FTP projects.

Due to the lack of real money, many projects are transferred to the so-called credit scheme. And this creates difficulties.

Loans are an additional burden on every enterprise. It is very important that the funds that are distributed to us before 2020 of the year should be concentrated “for now and today”, and not after 2 – 3 of the year.

- Can you tell more about the laboratory and test complex?

- At the head office, the new LKK has been completed with a total area of ​​about 8000 square. m, equipped with modern laboratory equipment and benches polunature modeling. This will ensure the creation of promising products with various types of guidance systems and homing heads in a wide range of frequency characteristics. The LCC is equipped with a huge anechoic chamber that allows you to simulate real flight conditions. In addition, there are simulation stands with unique capabilities that mimic real flight conditions. Temperature stands capable of reproducing heating at high speeds, especially on sharp surfaces - wingtips, etc. Elastomer stands that allow you to test a rocket with the engine turned on. Vibration and others. In the fourth quarter, LCC will begin to carry out planned work.
But the main problem is not equipment, but people. Skilled workers in many specialties - the acute shortage. Independent Military Review published several articles on this topic, including Deputy Prime Minister Dmitry Olegovich Rogozin, who is responsible for the defense industry.
I repeated and repeat that we need a nationwide program of training and adaptation with the subsequent consolidation of young personnel.

- How is the frame consolidation? After all, this is directly related to the solution of social problems.

- We dealt with this issue practically from the very beginning. I even managed to light it up in front of Vladimir Vladimirovich Putin in 2010. He instructed the government to find the possibility of allocating "spots" for housing development for the corporation. Under the law, land plots are allocated through auctions, but this leads to a significant initial increase in prices. In addition, the plots, as a rule, are allocated where to get to work, as to Moscow. We were given “spots” behind Pushkin, or the discharge was accompanied by an additional large burden.

As a result, we had to clear one of our technical site in 4,2 hectares. The city helped us here, and we managed to buy it out at quite preferential prices. They made the projects, agreed with the city and regional authorities. To date, have begun to implement. We are building four 17-floor houses. One house has already been erected on eight floors, the second - on three, the other two have foundations. I think that by next year we will complete the construction of all houses.

By itself, the construction is quite expensive, without a co-investor is very difficult. Five years ago, when the city allocated a plot to us, we built such a house. Sold to their employees at cost, then it was about 30 – 31 thousand rubles per square meter. But time passes, the cost of housing increases. Nevertheless, with the commercial price in the city of Korolyov, about 90 thousand, we were able to agree that for our employees the cost would not exceed 39 thousand. This will allow us to significantly improve the housing situation. Soon we expect to invite the vice-premier to cut the ribbon.

- At MAKS-2011 two years ago you introduced 15 aircraft missiles. What is interesting this year?

- This time we decided to exhibit only those products that have already entered the final tests and have rather unique characteristics. In addition, we will also show the products of NPO Mashinostroenia, which will make it possible to somewhat reduce the total product range. In order to avoid that the quantity “does not overwhelm” the impression, we will dwell on such fundamental products, which, in my opinion, will determine in the future the level of our deliveries both for the Ministry of Defense of the Russian Federation and for export. That is, those options that have an export passport, based on the fact that the exhibition is international.

- Can you name them?

- These are products 31AD - high-speed anti-ship missile with an increased range; X-35UE - further development of the known anti-ship missile, anti-radar missiles - X-31PD and X-58USHKE. All these products have approximately twice the performance of their predecessors. This applies to flight range, and accuracy, and a striking effect.

We show unique products - long-range air-to-air missiles RVV-BD. Adjustable aerial bombs caliber 250 kilograms. Of the products of NPO Mashinostroenia, there will be the Russian-Indian BrahMos, as well as satellite products.

- If we are talking about BrahMos, how are relations with the Indian side?

- We tried to mutually beneficial cooperation continued at the same level. BrahMos is a unique project showing how you can combine the efforts of the two countries, especially with such a friendly one like India. We are successfully fulfilling contracts that we conduct through Rosoboronexport and RSK MiG. In particular, our products will be considered for the MiG-29K and MiG-29 KUB.

- How do you go about the process of signing the state defense order?

- The question of how much interest is contracted often rises. Sometimes fair criticism sounds that this is not done very quickly even after the change of leadership of the Ministry of Defense. I think this process will get better in time. I like that the main customer is headed by such a specialist as Yury Ivanovich Borisov. He himself was a director, he went to school in the ministries and the military industrial complex, he represents what the new products are made of.

At the moment, we have almost completely contracted. We still have a couple of contests. But this is not the fault of the Ministry of Defense, but due to the fact that we did not receive the 1 letter on the design documentation. We hope that this process will be completed soon. Seriously advanced in design work. In many enterprises, everything that was planned to be contracted this year has been completed. Work is being adjusted and service. But if earlier we could not even get a settlement for the work performed in 2011, now, when this work has acquired a planned character, we have made significant progress in this direction. There are certain remarks, but they relate not to the Ministry of Defense, but to the legislative base. The essence of the comments is as follows.

Suppose you need to take a loan under the contract. We complete our obligations in the 2016 year, and to us the loan is repaid, relatively speaking, to 2018. And, despite the fact that the products will already be delivered, we must maintain collateral for this loan until 2018. This is an additional cost. And exactly the same scheme of payment for advances. Suppose we have a five-year contract, and advances are made every year. And we pay a guarantee, we immediately issue 80% of the entire contract. But if this year we were given 20%, let's at least break the guarantee in proportion to this, which will significantly reduce the burden on the company.

About federal law number 94 said a lot. If it concerns serial products, then its requirements are justified. But for OCD it is no good. Imagine that we are concluding a contract that says that by December 31 we have to complete the work and receive such characteristics on the product. What kind of scientific work? This is a repetition of the past. And scientific work is the study of the unknown. There must be some flexibility. The example of our partner partners shows that rarely a topic on OCD ends exactly at the appointed time. Some reasonable play should be entered. Here it would be desirable to note.

Ctrl Enter
Noticed oshЫbku Highlight text and press. Ctrl + Enter
We are
New plants and workshops in Russia in 2014 yearList of destroyed the largest and most high-tech enterprises
Military Reviewin Yandex News
Military Reviewin Google News
10 comments
Information
Dear reader, to leave comments on the publication, you must sign in.