August 30 2013
30
“If you fall away from your faith, as many intellectuals have already fallen away, then you will not be a saint in Russia or Russia, but a rabble of any non-believers seeking to destroy each other”
St. Prav.Ioann Kronstadt

Civil war is the worst thing that can happen to a country. Today we see this in the example of the countries of the Arabian arc - Syria, Libya and again flaming Egypt. Imagine what these conflicts would be like if at least one of these countries had nuclear weapon… fearfully. But once he was not with us. The nuclear shield performs one very important protective and psychological function - it does not allow foreign troops to set foot on their native land. That is why, when we did not have it, and the country fell into the abyss of fratricidal war, our "allies" were quick to take advantage of it.

This summer, I twice managed to visit the outback of the Russian North - the village of Sura in the Pinezhsky district of the Arkhangelsk region, in the homeland of the holy righteous John of Kronstadt. All Russia loved and esteemed her father - thousands of people visited his services in Kronstadt every day. He was surprisingly perspicacious and predicted a revolution even over 10 years before it began. But he could not predict one thing - that the British would invade our land and seize his native village! This was told to me by the great-grandchild's nephew of the father, Father Alexei, who today serves in the Church of St. Nicholas the Wonderworker restored in Sura. And the headquarters of them was in the house of the forefathers of Father Alexey, and his grandmother even showed him the traces of bullets - after getting drunk, the British began to shoot in all directions.

Tempted history the reader knows that exorbitant drunkenness is not all that an English soldier is capable of. It was the British who invented the concentration camps during the Anglo-Boer War 1901 — 1902. It is not surprising that they repeated this experience during the intervention in Russia in 1918, creating an concentration camp for Russians on the island of Mudyug near Arkhangelsk, which was called the “island of death”. 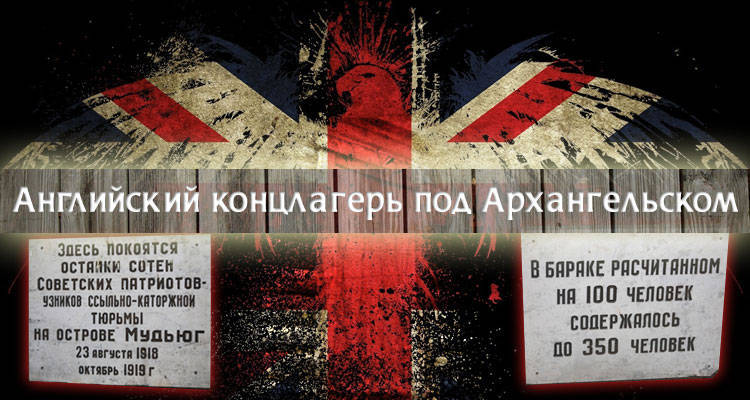 Today, neither the British nor the Americans love to remember how, in the 1918 year, they invaded Russia with their armies. But we remind them, it's simple.

An interesting thing is when a civil war breaks out in two different camps in the country - the British, like the Americans in Syria today, immediately try to "support" one of the camps that howl in a fratricidal war. Moreover, today we already understand perfectly well that they absolutely, as they say, are in a drum, who is fighting for what. The main thing is the immutable interests of the British Empire.

It all started with the fact that the British in March 1918, landed their five thousand troops in Murmansk. Under the pretext of "the need to protect the warehouses of military property from the Germans." 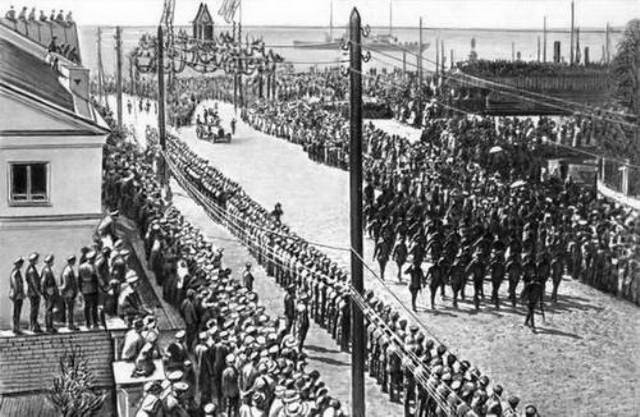 As usual, the First World Russian Army fought for its allies in a foreign land, giving lives of thousands of its soldiers (let us recall the slaughter of French General Nivelle and our French corps, most of whom had fallen for France). But when in Russia, without the help of agents of the British special services, a revolution “happened”, the troops of the Entente invade the territory of a sovereign state under a fabricated pretext without remorse.

The camp itself in Mudyug is written in the book “Some facts and results of 4 years of the Civil War” by V.I. Ignatiev (Bely Sever. Arkhangelsk, 1993. T.1): 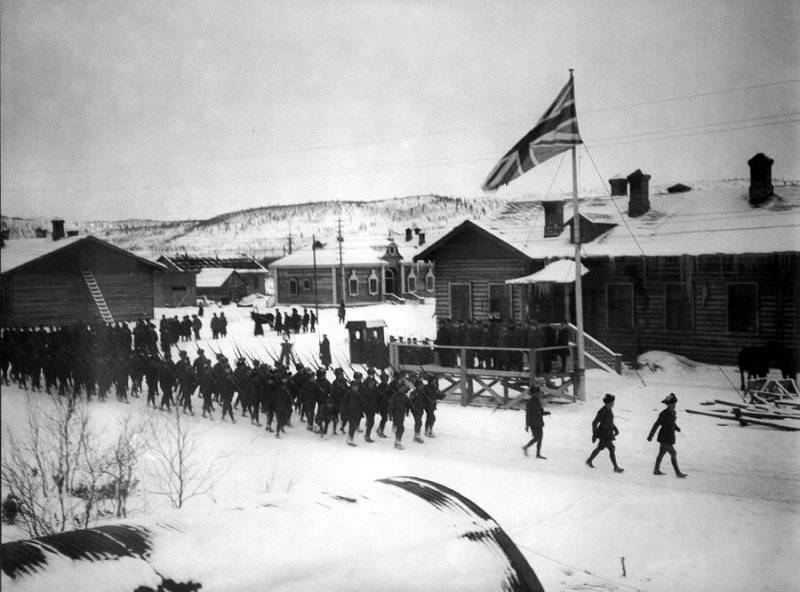 “During the civil war, the first concentration camps were created in 1918 by the English on Mudyug Island and in Iokanga Bay. They were placed suspected of sympathizing with the Communists. A study conducted by Iokangovskiy Sovdep after the fall of the Northern Region showed that of the 1200 prisoners who had been in the dungeons of Iokangi, only 20 people belonged to the Communist Party, the rest were non-partisan. Of these 1200 people, 23 people were shot, 310 died from scurvy and typhoid, and only 100 people remained more or less healthy. ”

What right did the British have to create concentration camps on the territory of a former ally? Please note that this is very similar to the tactic of the faithful Anglophile Adolf Aloizovich Hitler.

Suppose they really "wanted to help" the White movement in the fight against the Communists. But then why, as I.S. writes in his article “Pages of Life”. Krivenko (New World magazine. 1967., No. 11), did they take part of the prisoners to England? I quote:
“Not only on the territory of Russia, the British organized concentration camps. So, in September, 1919. 47 people were loaded into the hold of an English vessel, taken to England and placed in a Wheatley Bay concentration camp. ”

So they and at home were concentration camps for Russian prisoners! Fine, because all this was with the knowledge of Prime Minister David Lloyd George and King George V. It could not be otherwise.

They wanted to "help", speak? Of course, it helped a lot. After all, as is known, the government of the Whites, namely, the commander-in-chief of the Russian army, Baron Wrangel (the only, by the way, not tainted by the tsar's treachery), the Entente recognized in August 1920. two months before the departure of the white troops from the Crimea. Consider when everything has already been predetermined.

What happened next, we remember - in fact the same concentration camps, but for whites, on the island of Lemnos.

You could read more about this in the article “How the British and French destroyed the White movement”.

Yes, the most important thing is that when the British were evacuated from Murmansk to 1920. , for some reason they did not leave the ammunition and food their "allies", and drowned! This is, indeed, another act of nobility on the part of the "friendly" power.

There is another interesting book released in the Soviet years, in 1939, which is called “Foreign intervention in the Soviet North. 1918 — 1920. ”

Here is a quote from it on the results of the intervention of the British:
“During the intervention, about 52 thousand people passed through the prisons of Arkhangelsk - 11 percent of the total population of the Arkhangelsk province. In the convict prison on the island of Mudyug, the “island of death,” as they rightly call it, over a thousand people “visited”, of which more than 200 people were shot and died from diseases. In another convict prison - on Iokange - there were more than 1200 political prisoners from
more than 300 people died from tsyngi, typhus and brutally murdered by the White Guard executioners.

The economy of the Soviet North was destroyed to the ground. Even the lackeys of Anglo-French imperialism - the Social Revolutionaries, Mensheviks, who met at the Zemstvo Assembly in January 1920, gave this characteristic of the political and economic situation of the North: “The industries (artisanal, salt, fishing) have fallen or ceased, industrial life has stopped. The land issue is not resolved, the food issue is in a terrible state. The lack of installed ration affects painfully and acutely everywhere. Seeds are eaten, and the area threatens new sowing. Military service (horse-drawn, etc.) is extremely sharply reflected in agriculture, and the obligatory supply of meat and hay is a blow that undermines the foundations of agriculture. The roads are in disrepair, there is no public education, because the schools are either occupied by the military department or destroyed due to the lack of repairs. There is no public charity. ”*

(* From the resolution of the Arkhangelsk District Zemsky Assembly, published in the newspaper “Revival of the North” of January 21, 1920) ”.

In 1928, an 17,5-meter-high monument to the Victims of Foreign Intervention was erected on Mudyug Island: 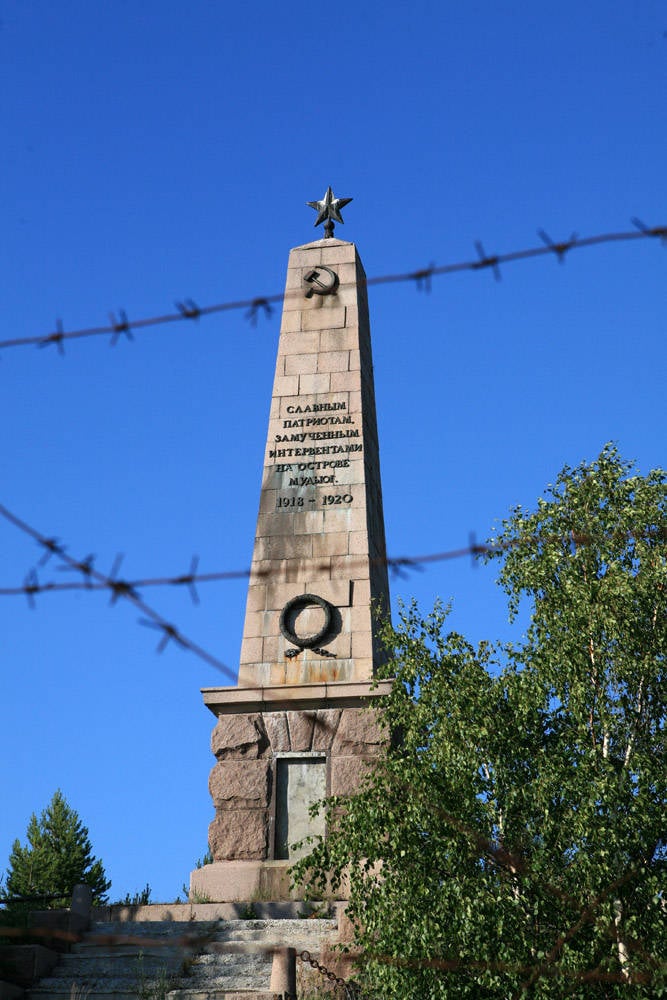 Today, on the territory of the former English concentration camp, a museum has been set up in memory of the victims of foreign intervention.
Summing up, I will say the following.

History teaches that never in the entire history of our country the English were “allies” to us. Betrayal, deceit and deceit are all that we received in exchange for help.

The geopolitics of a country stems from its geographical location.

“Geography is a sentence,” said Napoleon, who perfectly understands the subtleties of geopolitics.

“Russia has only two allies — the army and the fleet,” said Alexander III, and while the Tsar was fishing, all of Europe could wait.

Thank God, that for the last 50 years we have been under reliable protection of the nuclear shield, and the intervention of NATO generals can only dream.

In all other respects in foreign policy, we should be guided only by the pragmatic interests of our own country.

And by no means repeat the mistakes of the past. After all, with a nuclear shield, in fact, the only possibility for our geopolitical "allies" to destroy the country is to incite the people to civil war again.

Ctrl Enter
Noticed oshЫbku Highlight text and press. Ctrl + Enter
We are
The castle of Saint Florentine: "the castle that was never besieged, and in which they live"The first information war. Legends of the "wild hordes of Muscovites of Tsar John the Terrible"
Military Reviewin Yandex News
Military Reviewin Google News
30 comments
Information
Dear reader, to leave comments on the publication, you must to register.