Why has the situation in Syria or the everyday life of world geopolitics escalated? 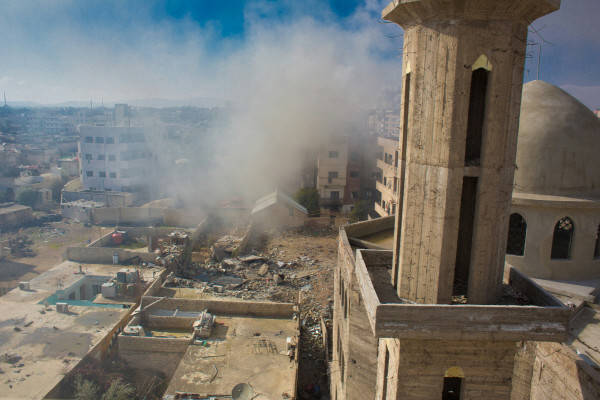 The situation around Syria has strained to the limit. Will the aggression of the States and their allies follow? Let's look at the causes of the exacerbation of the situation and then we will have information for analytics.


1. The US strategy in the Middle East is to sow Chaos, destroy statehood and in every way reset the economy and living standards of the states of the region. The goal of all this is to create a new “collective Hitler”, a new force, which is then planned to lead through Afghanistan to Central Asia. Next, causing upheavals there, throw the fire heads inside Russia and China.

3. The plan began to act. The United States destroyed Libya and Yemen, shook Morocco and Tunisia. Then Syria was supposed to collapse, but with the support of Russia and China it resisted.

4. Unable to cope with Assad, the United States began to experience problems with its reputation. Militants and terrorists do not “pull” the task, and you cannot interfere in full growth yourself. After all, Chaos must be "in itself", separately from the American army, and not be the result of her coming somewhere. By intervening once and then hidden (special forces) in the events in Libya, the United States created a precedent. The brutal murder of Gaddafi was to discourage the resistance of all the leaders of the region. But Assad did not flinch, and Syria doesn’t completely dive into Chaos. The power of the country holds and the further, the more it supports the population. It is impossible to invade, but it is necessary to destroy the country. Then the States decided to withdraw from the Syrian situation. Leave to return later, not immediately.

5. Leaving Syria, the United States began to change the information background. The world media talked about "terrorists", although previously there were only rebels. The shooting of 450 Kurds (women and children) no one even thought to blame the Syrian army, they immediately said that the militants did it.

6. The first result of the withdrawal of the States from Syria was the surrender of the regime of Muslim brothers by the Egyptian military. Having received a blank check from the United States, the army firmly put things in order. Do not hesitate, as if forgetting about the "Hague court", shed blood. Egyptian army "suddenly" decided to shoot demonstrations in defense of the legitimate president of Mursi, who was removed by the military themselves? And two years ago, the same army was afraid to defend the legitimate President Mubarak? Not. Two years ago, the Americans said to surrender Mubarak, and now allowed to remove Mursi - that's the whole difference.

7. The reason for the elimination of the Egyptian regime is purely informational - the Islamists must become bad. So that the United States could stop their assistance without losing their reputation. But the new Egypt was assigned the role of "shop window". Look, Islamic radicals came to power and the country lives normally. Hard, yes. But in Libya and Syria, where the leaders did not give power, the situation is much worse. Therefore, give it away. In Tajikistan, Uzbekistan, etc.

8. Even before the events in Egypt, against the backdrop of the “Snowden case,” the US president refused to meet with the Russian president during the meetings of the heads of the leading 20 countries in St. Petersburg on September 5-6. This decision was not due to the fact that Russia gave asylum to an American citizen. Snowden was just a pretext - US diplomacy simply had no trump cards to talk with Putin.

9. Instead of communicating with Obama, Russia and China planned at the summit to announce the creation of a new “monetary union” in the form of a sovereign fund, the main “chip” of which should be the possibility of issuing debt securities and the possibility of lending at low% of business projects in Russia and China as for their and for foreign businessmen. In the case of this step, the blow is inflicted on the Anglo-Saxons, which is called podhy. At the same time, the place of the statement attracts the attention of all world media - it is impossible to conceal.

10. Information about the intentions of Russia and China is becoming known in Washington and London. They urgently need a trump card, they are urgently, in a terrible time trouble, you need to create a serious problem for the Russians and the Chinese in order to exchange it for the refusal of the statement about the creation of a “monetary union”.

11. And "suddenly" the situation around Syria became aggravated. Having no evidence of chemical use weapons in principle, having no evidence of the use of these weapons by the Syrian army, the United States and its closest allies “suddenly” are ready to start a war against Bashar al-Assad WITHOUT the UN SANCTION. The meaning of their actions is to slam the door so loud that everyone will turn away from the window.

12. They cannot fight "land" in Syria - there will be serious losses and losses. Bombing Syria with impunity will not work either - our air defense systems are there. In addition, there will be no sense in bombing. This is not Kosovo - there is no one to be separated. But there is no way out, they are obliged to respond to the Russian-Chinese financial threat, which undermines the basis of their power. And now the West “beats its wings” and makes statements one more threatening than the other. This is August 26.

13. On Tuesday, 27 August, the tonality of US statements magically changes. Now we are talking simply about “punishing” missiles, we are not talking about disembarking and overthrowing Assad. On Wednesday, 28 August, the tonality softens even more, the UK speaks about introducing a resolution to the UN, although two days ago it stated that it would start a war simply at will without any permission from the international community.

14. Only one fact leads to a change in rhetoric and a decline in the passions of Western leaders: in St. Petersburg, Obama will still meet with Putin. There will be negotiations, which means that the US will try to exchange the problem of the war in the Middle East created by them for the non-declaration of a “monetary union” between Russia and China.

15. Forecasting is always a thankless task. Especially in a situation where the US is cornered and experiencing hard time pressure. But judging by the entire amount of information, most likely, there will be no impact on Syria. Before Obama’s meeting with Putin and, most likely, in principle.

16. Instead, the "partners" in the negotiations will agree on the exchange. After that, the United States will begin to return to Syria, that is, will begin to strengthen the supply of weapons and money to the "rebels", and Russia and China will prepare a new opportunity for the announcement of "monetary union." Everything will be as usual. Hardly having agreed, each party will try to deceive its “partner” in the negotiations. This is politics ...

In this situation, two things can not but rejoice: the inability of the United States to solve all the accumulated problems with its resources and its need to negotiate with other centers of power. That does not fit with the status of the sole superpower. And another, which cannot but please - the chaos that the Anglo-Saxons sow in the Middle East, already leads to the fact that they themselves are stuck in it. And this makes it possible for Russia and China to strike them in the most sensitive place for the United States and Great Britain - in the financial sphere. Which is the basis of their power.

Ctrl Enter
Noticed oshЫbku Highlight text and press. Ctrl + Enter
We are
Nikolai Starikov: "There will be no blow"Who will be the next victim of destabilization in the Middle East?
Military Reviewin Yandex News
Military Reviewin Google News
47 comments
Information
Dear reader, to leave comments on the publication, you must to register.