August 30 2013
111
It all started at the end of March. When on Catholic Good Friday near the Swedish air border were seen two Russian bomber flying accompanied by four fighters, even the strongest blond warriors in the northern country trembled. Later, on Russian TV, a parody video was launched with an officer of the Swedish army singing a song about Russians who “go” and “tear”. Even later, the Swedes somehow frightened the Russian military exercises in the Far East. The Swedes also remembered how independent Georgia did not last long in 2008 against Russia. Actually, five days just lasted. Sweden, of course, will not last five days, but seven, but still, all the same ... 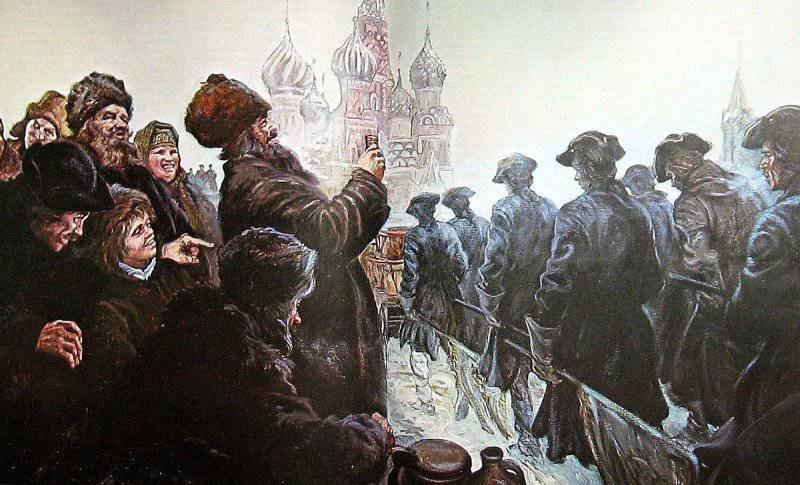 Captured Swedes in Moscow. Picture by the Swedish artist Göte Göransson from Oberg and Joranson’s Caroliner

In January 2013, Karl Haglund (Finnish Minister of Defense) spoke on what will happen if a military conflict begins. And he hastened to clarify: his home country will be able to defend itself without foreign aid longer than neighboring Sweden. The minister was interviewed by the newspaper Helsingin Sanomat, in which сказал: “Finland has not weakened its defense capabilities to such an extent as Sweden”.

Along the way, it turned out that the words of the Minister of Defense did not arise from scratch. Mr Haglund commented on the statements of the Swedish colleague Sverker Goranson. He, with the utmost Swedish frankness, had earlier told reporters that Sweden would be able to confront the interventionist enemies for just one week, and then she would need external assistance.

As potential interventionists in Sweden, there are usually states where human rights are violated, where there is not a hint of various freedoms, where there is no democracy and where the government is strongly interested in the Arctic, while at the same time engaging in accelerated modernization of the army.

March 29 happened terrible: Russian military exercises were held a few kilometers from the Swedish border. And the simple Swedish people found out about the maneuvers of six Russian airplanes near the border only on April 22. This is stated in the material Svetlana Stitch ("Expert"), citing the newspaper Svenska Dagbladet.

Information declassified some anonymous source in the Swedish Armed Forces.

“... After midnight, six Russian military aircraft suddenly appeared in the Baltic Sea near the Swedish island of Gotska-Sandyön - two Tu-22 bombers and four Su-27 fighters. No, the planes did not invade the airspace of the northern kingdom. However, military exercises were conducted only three to four miles from the Swedish border, an anonymous source, Svenska Dagbladet, said. Moreover, bombers could carry guided missiles or nuclear weapon. On sight were two of the most important military complex of Sweden - in the region of Stockholm and in the southern part of the country. "

Swedish Lieutenant-General Anders Silver told the newspaper that NATO had responded to the maneuvers: two Danish F-16 aircraft based in Lithuania, which "conducted" Russian aircraft at a distance, were raised.

Journalists decided that Sweden has a low combat readiness. The general objected: we supposedly have two JAS-39 “Gripen” fighters.

However, media representatives believe that the Swedish fighters were removed from duty, and the country's combat readiness is at an extremely low level. Well, and then came the guesses and assumptions: the press began to write that the "incident" resembles the times of the Cold War.

It was here that the unfortunate satirical video was released on the 1 channel of Russian television, which also played a small role in “intimidating” the residents of Stockholm.

In early May at Financial Times (source abbr. translation - "Inopressa") an article appeared in the northern correspondent of Richard Milne, who wrote that Sweden was very concerned about the mockery of Russia over its super-soldiers.

“To the music of“ ABBA ”, against the background of pumped-up men and girls in mini-skirts an officer of the Swedish army sings:“ Mamma mia! The Russians are coming ... They will tear us, seven or three, like a year ago in hockey. ”

The author of the article, a person with a sense of humor, understands that these frames are a parody. But the problems that make fun of the video, the Swedes are not fun.

The journalist recalls with alarm that two Russian bomber, accompanied by four fighters, flew close to the Swedish border - during the training bombardment. Not a single Swedish fighter took to the air in alarm ... And it was not sometime, but on Good Friday.

And bye the poles are talking about the upcoming Kremlin nuclear attack of Warsaw, the Swedish military seriously believe that the Russians, who were at the border, staged the bombing of Stockholm.

In a recent article in The Local, Swedish analysts expressed concern about Russia's growing military might. They are sure that this is a real militarization. Among the militarization factors highlighted by the publication, the channel "RT", - military exercises conducted in the Far East (the most ambitious since the Cold War). This is an alarming sign, says Swedish political analyst Aneli Gregor: after all, according to the scenario of the Caucasus-2008 military exercises, there was a five-day war in Georgia.

The author of the material saw in Russia even the strengthening of anti-NATO and anti-Western sentiments. When did such moods appear in Russia? Right now - in the third presidential term of V. Putin.

In connection with the modernization of the Russian army, Gregor and other Swedish political scientists are calling for an increase in the country's defense budget.

As Lyubov Lyulko notes (Pravda.ru), in the Kingdom of Sweden, politicians prefer not to answer the question of why Russia should invade Sweden. The material highlights the point of view of Stefan Hedlund, a professor at the University of Uppsala and the head of the “Center for Russian Studies”.

Russia today is perceived in Sweden as a great threat to national security, states Hedlund, who himself has a different opinion. In "Svenska Dagbladet" the scientist published an article under the telling title: "Russia poses no threat to Sweden."

Hedlund criticized his native parliament, which had approved an increase in the military budget in the spring, under the pretext of "militarizing" Russia and strengthening the "authoritarianism of the Russian regime."

It is interesting how Hedlund refutes these government theses.

The scientist believes that the military plans of the Russian government to modernize the army, to which 20 trillions of rubles were directed, have failed - due to the fact that “the inability of Russian manufacturers to ensure effective interaction between government customers and defense industry organizations, and also low quality of the supplied equipment. ” These are not the words of the author, but a quote from Vladimir Putin.

Hedlund gives an example of numerous failed tests of the Bulava missile, which has problems with poor-quality components. He also recalls the accident of the Kursk submarine, which occurred “due to the explosion of an experimental torpedo on board.” The author writes: "It is naive to think that the Russian military industry, which is in the position where it remained two decades ago, suddenly began to produce weapons and systems of high international standards."

As for Putin's authoritarianism, the scientist does not believe in it either.

Even more than that, Hedlund believes that this very authoritarianism has sharply decreased. According to the analyst, for a long time Russia will be paralyzed by political struggle. A deteriorating economy will lead the government to a forced redistribution of budget funds so as not to lower wages and pensions. "They may simply not have enough money for military spending there," the political scientist said.

The mentioned Aneli Gregor enters the controversy with the scientist on the pages of the newspaper.

She points out that in Russia, starting with 2009, six successful launches of the Bulava missiles were made. And in the second half of September one of the two Russian nuclear submarines should launch a Bulava near the Swedish border! And can the Russian army be underestimated after it conducted the “2008 Caucasus” exercises on the eve of the war with Georgia?

Gregor predicts not a recession at all, but the growth of the Russian economy. Moscow is reorienting to cooperation with Beijing, which "craves for oil, and its demand is likely to continue to grow." Russian gas will also be in demand: after all, Germany refuses to use nuclear energy.

The militarization of Russia is indirectly expressed in the fact that, according to the report of the Stockholm World Research Institute (SIPRI), this country became one of the world's leading suppliers of weapons, in 2012, reaching sales in 15 billions of dollars.

And authoritarianism has not gone away. Gregor cites a proof of a Human Rights Watch report describing democracy in Russia as “suffering and unprecedented persecution of civic activism and political freedoms.”

Conclusion Aneli Gregor: Sweden should not ignore the militarization of Russia. Defense expenditures in the amount of 1,2% of GDP are necessary.

In the meantime, the simple Swedish people — more precisely, their male half — are not at all eager to show patriotism and enroll in volunteers.

Due to the lack of men, the Swedish army is equipped with “Amazons”, writes newsbalt.ru with reference to "The Local".

Twenty-year-old Matilda Spaton-Goppers, sent for basic training to the east of Sweden, explains her desire to serve in the army with curiosity: “I want to discover and understand whether Sweden needs an army. Men dominate there. As a woman and a feminist, this should be very interesting to me. ”

Soon this “interesting” army will become one big Swedish family, which will answer the question “does Sweden need an army”.

As for the timid Swedish generals, he apparently has a strong historical memory…

Observed and commented on Oleg Chuvakin
- especially for topwar.ru
Ctrl Enter
Noticed oshЫbku Highlight text and press. Ctrl + Enter
We are
Results of the week. “Who is against? Overwhelming minority! ”Finland and Sweden: who will last more than a week against Russia?
Military Reviewin Yandex News
Military Reviewin Google News
111 comments
Information
Dear reader, to leave comments on the publication, you must to register.