Sicilian Mafia against Hitler and Duce 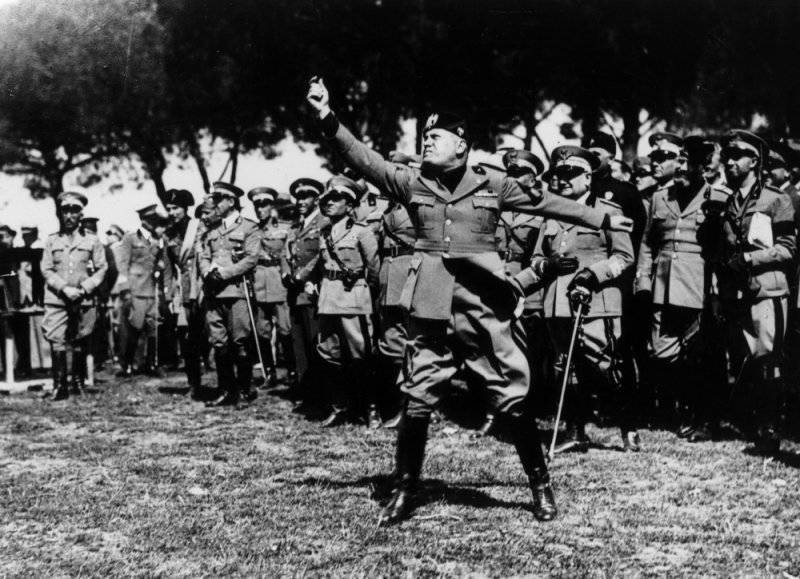 Practical Americans never burdened themselves with the bonds of morality and ethics. If cooperation with organizations and people outside of any laws offers any preferences, the question of whether such cooperation is permissible is not even discussed. Planning a landing in Sicily in 1943, the US military decided to attract Sicilian mafia as an ally. 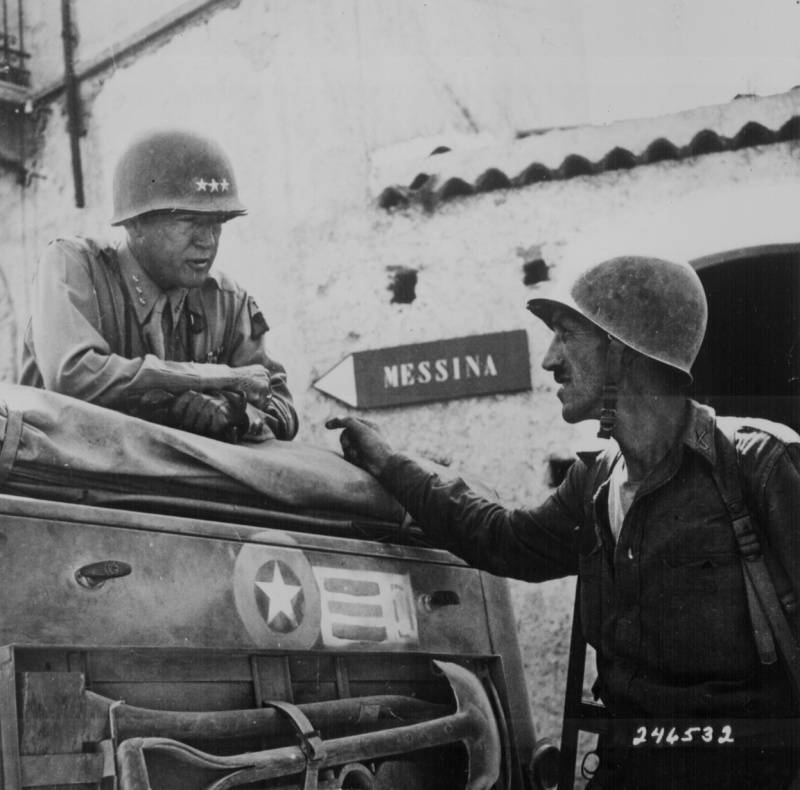 In January 1943, during secret negotiations in US Moroccan Casablanca between US President Roosevelt and British Prime Minister Churchill, a decision was made to land Anglo-American troops in Sicily in the summer of that year. The 6th Italian army was then stationed on the island under the command of General Alfredo Guzzoni. At his disposal were 9 divisions and the 14th German tank corps (including the German Gering tank division) - a total of 300 thousand Italian soldiers, 40 thousand German, 147 tanks, 220 guns, 600 aircraft. The Anglo-Americans assumed the assault on the island by 13 divisions, 3 tank brigades, 3 commando detachments and 3 ranger battalions; In total, the group consisted of 470 thousand people and 600 tanks. The operation, called "Husky", provided for the landing of sea and airborne assault forces. Until the Allied landings in Normandy, the Husky remained the largest naval landing operation. Nevertheless, it was a difficult task for the Allies to take the mountainous island defended by the Italo-German troops. Therefore, the Americans decided during the operation to rely on the "local resistance forces" - the Sicilian mafia, which was to become the "fifth column" during the fighting on the island.

To establish contacts with future Sicilian brethren on arms Employees of the American OSS (Directorate of Strategic Services - the forerunner of the CIA) decided to turn to Salvatore (Lucky) Luciano who was serving a 50 jail in the Klipton prison. 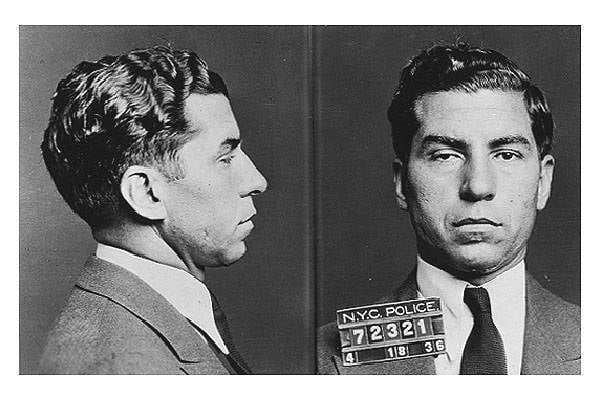 Salvatore Luciano was born in Sicily in 1897 year. In 1909, the Luciano family, fleeing from want, moved to the United States, where countrymen, who had already taken root in American soil, quickly took the clever boy into circulation. Salvatore, starting from the bottom, slowly but steadily rose to the top of the underworld, not missing a single step. Lies, betrayals, murders - for every step he paid the price in full. Once he was seized by members of the opposing faction. They tortured Salvatore for the whole night, trying to find out the whereabouts of the alcohol cache. When the police patrol found Luciano in the morning, they found him dead. But the "corpse" showed signs of life, and the police took Luciano to the hospital. Skull fracture, 8 rib fractures, 11 teeth knocked out, fractures of the large and small tibial bones, left wrist broken. In addition, Luciano was covered with a razor, numerous burns on his body, and his left eye was damaged. Doctors were confident that the victim would not make it to the evening. But Salvatore survived, after which he received the nickname "Lucky" (born Lucky - lucky), which became his second name. By the middle of 30, Lucky Luciano was the most authoritative US gangster. It was he who united the scattered Sicilian criminal gangs into a single organization “Cosa Nostra”, divided the country between “families” into zones of influence, created the “G7” - a collective governing body controlling alcohol trade throughout the United States. But in 1936, the New York State Attorney, literally turning inside out, soldered the 50 gangster king over the years to organize dens and brothels and put Luciano in jail for almost a lifetime.

That's who the US military asked for help. 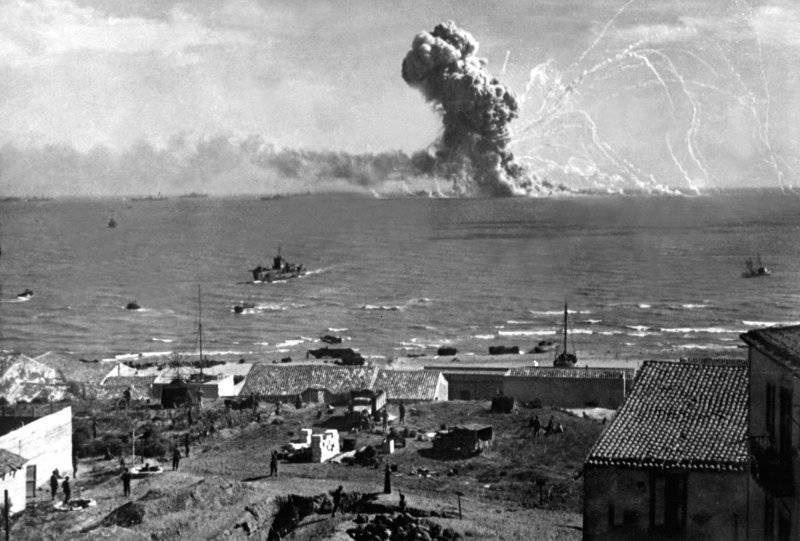 Operation Husky began on the night of 9 on 10 in July of 1943. Anglo-Canadian units landed on the southern coast of Sicily, the American - in the south-east. And on July 14 an airplane flew over the village of Villalba, which dropped the package. The boy picked up the grazing goats and immediately rushed off with her to Calogero Vizzini. Even the five-year-old shepherd knew that every significant event in Sicily happens only with the knowledge and approval of the 66-year-old don Caló. He is the true owner of the island, you need to tell him about everything that is strange or incomprehensible. In the package was a yellow silk scarf with a big black letter “L” in the middle and a letter. That same evening, the envoys of Don Calo rushed to all ends of Sicily. They penetrated the location of the Italian units and gave the soldiers the "request" of Don Calot to not resist the Americans and leave the position. They supported their words with heaps of civilian clothes and assurances that in every village they would be provided with accommodation and lodging for the night, in every peasant house there would be a loaf of bread, a piece of cheese and a glass of wine for them. Soldiers from local natives explained to their fellow soldiers from mainland Italy who Don Kahlo was and what usually happens to people who ignored his “request”.

July 20 tank column approached Villalba. A strange yellow flag with a black “L” in the center was flying over the lead tank. Don Calo met a convoy at the entrance to the village to personally lead the Americans through the danger zone. The column went without encountering resistance. While the British and Canadians fought along the flat part of Sicily, the Americans, almost without loss, marched through the mountainous regions. The mafia cleared the roads of snipers, provided guides, provided support to the local population. American officers received information from her about bridges, rivers, and the availability of sources. The cities surrendered without a fight, the garrisons surrendered without firing a single shot. As one of the American officers enthusiastically remarked, the assistance of Calogero Vizzini replaced the whole tank division. Only the soldiers of the Wehrmacht, for whom the oath of the Führer was above the request of a certain Don Kahlo, offered desperate resistance to the Americans. Crushing the German units, the Americans went to the north to take the capital of Sicily, Palermo.

How did Monte Kammarath fall

The fortress of Monte Kammarata, covering Palermo, was supposed to be the nut about which the Americans break their teeth. But she did not. On July 16, the envoys of Don Calóh penetrated the fortress, began, by the usual pattern, to incline the garrison to surrender. The emissaries talked with each of the officers: “You seem to have a family in Rome / Naples / Milan? We will be very upset if any misfortune happens to your daughter / wife / mother / son. You don't want this, do you? ”By the morning of July 21, the garrison of Monte Cummarata had been reduced to 2 / 3. The commandant of the fortress, Colonel Salemi, a fanatically loyal duce, went to the headquarters in the city of Mussomeli to demand reinforcements, but the people of Don Calot set up an ambush, the car was fired upon, the colonel was taken prisoner. Left without a commander, with the remnants of the garrison, with officers unwilling to fight, Monte Kammarat surrendered without a fight. July 22 Americans triumphantly entered Palermo. 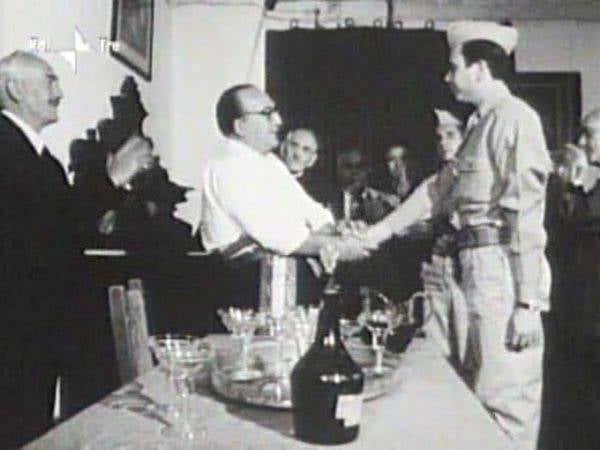 It is difficult to say whether the decision of the head of the Sicilian mafia to support the Americans who landed in Sicily was to release the island from the power of Mussolini (with whom, by the way, the mafia did not have a clear relationship), or behind this decision were mercantile interests. But the Americans, with unusual generosity, thanked the Mafia General. In a solemn atmosphere, representatives of the Allied Military Government in the Occupied Territories (AMGOT) handed over to Calogero Vizzini two trucks, a tractor and a gasoline tank. But the main gift was the assignment to him of the honorary title of colonel of the US Army and the appointment as mayor of Villalba with the granting of unlimited rights. Don Calo immediately created a local militia from among the people loyal to him in order to “organize order”. The Americans supported the initiative and allocated weapons to the police from their warehouses. Cooperation continued and strengthened. According to the recommendations of Vizzini, mayors were appointed in all cities and villages of Sicily. Don Calo's trucks drove around the island, delivering gasoline, food, medicine, military uniforms, and even weapons, bought (or stolen) from Americans. The persons accompanying the trucks had on hand the relevant documents certified by the seals of the occupational administration. Occasionally shots sounded at night: Don Calo settled scores with old enemies and rivals. The overly curious and intractable police chief of Villalba died tragically. Calogero Vizzini became the king of the black market of Sicily, and when the Allies landed in southern Italy, the trucks and the people of Don Calot appeared there.

Do not forget the Americans and Lucky Luciano. In 1946, he was released for special services to the US government and the American people. True, the Americans did not want to keep the hero of Operation Husky and deported him to his homeland, where he, using his connections, very soon organized a “drug bridge” the Middle East-Italy-USA. Lucky died of a heart attack in 1962 year, becoming one of the few leaders of the underworld who have gone to that world by non-violent death.

It can be said that thanks to the Americans, Onorata Societa regained its power lost before World War II. Having saved thousands of lives of American soldiers in 1943, the mafia collected a doubly reaping harvest in Italy in the following years. However, this sad statistics of Americans did not disappoint at all, because they were only Italians!

Ctrl Enter
Noticed oshЫbku Highlight text and press. Ctrl + Enter
We are
From assassination to execution. The path to the death of Benito MussoliniDiplomats of the People's Commissariat of Defense: on the eve and during the war
Military Reviewin Yandex News
Military Reviewin Google News
18 comments
Information
Dear reader, to leave comments on the publication, you must sign in.