Problems with the supply of Ukrainian armored vehicles 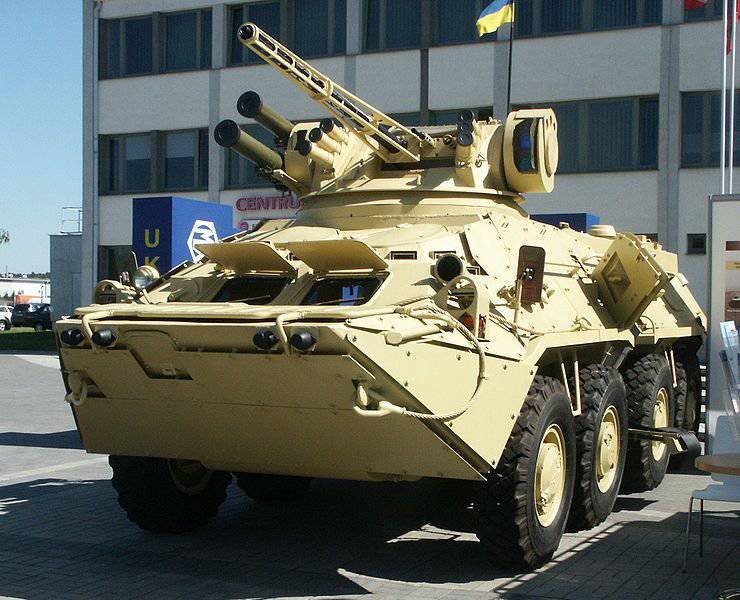 The difficult political and economic situation of Ukraine requires its leadership to take measures to restore the country's industrial potential, including the defense sector.

In 2012, Ukraine officially ranked fourth in the world as a seller weapons. At the same time, according to some experts, the Ukrainian exporters of weapons and military equipment are particularly interested in the market of third countries, with some of them being world "outcasts": Sudan, Thailand, Georgia, Libya, Sri Lanka, Ethiopia, Iraq, etc. d. According to them, the fact that Ukraine has sold weapons and "dual-use" weapons to countries with a difficult political and military situation is being carefully concealed from the world community. Thus, according to a number of news agencies, Ukraine supplied military equipment and weapons to South Sudan during a confrontation between the Liberation Army of South Sudan and the Sudan People’s Liberation Army. The reason for the conflict was the division of oil fields in one of the areas of Sudan. Civil war engulfed the whole of Sudan. Human rights activists claim that it is precisely the deliveries of military equipment by Ukraine to the parties to the conflict that provoke its aggravation.

Sudan is one of the largest buyers of Ukrainian weapons. Prime Minister of Ukraine N. Azarov has repeatedly said at negotiations with the leadership of Sudan that the potential of the two countries makes it possible to increase trade between them tenfold. Political dialogue makes the expansion of economic cooperation in many areas: for example, energy, agriculture, construction, transport, mining.

In October 2009, between the state company of Ukraine Spetstekhnoexport and the Military Industrial Corporation of the Ministry of Defense of Sudan (Military Industrial Corporation - MIC), a contract was signed for the supply of a significant batch of ground weapons: 110 tanks T-72M1, 60 T-55M tanks and one hundred and twenty armored personnel carriers BTR-3E1. A party of tanks arrived in Sudan from the warehouses of the Ukrainian Ministry of Defense. These tanks were already repaired on the spot. As for the armored personnel carriers, they, according to the terms of the contract, must be of new production and delivered with the spare parts set in the contract, the Sturm-3MS combat module and additional protection. The total cost of the contract was about € 70 million, and parts for equipment were purchased for € 7 million.

It was assumed that this contract will be part of a larger supply of arms to Ukraine to Sudan, the financial component of which is equal to several hundred million euros. By 2012, the terms of the contract regarding the supply of tanks were completely fulfilled by Ukraine. In addition, Sudan was supplied with 30 BMP-1, 30 of MLRS BM-21 Grad machines, BTR-70D (command and control vehicle), 41 self-propelled howitzer. But with regard to the commitments on the supply of one hundred and twenty BTR-3Е1, the Ukrainian side faced enormous difficulties. By 2012, only ten vehicles were transferred to Sudan, but the Sudanese military also had big complaints about them due to the unsatisfactory quality of military vehicles. The failure of delivery times and poor quality of equipment led to the fact that the Sudanese side was forced to abandon the supply of 110 BTR-3Е1. It should be noted that after receiving small lots from Ukrainian manufacturers of BTR-3EX1, customers from Azerbaijan, Kazakhstan, the United Arab Emirates and Myanmar also refused to receive these armored personnel carriers.

Perhaps it would be wrong to place all responsibility for the production of low-quality military equipment on the Ukrainian machine builders. After all, members of the international consortium - ADCOM MANUFECTCHERING Company Limited WLL (UAE), Doyts AG (Germany), Kharkov Design Bureau for Mechanical Engineering named after. A.A. Morozova (Ukraine), State Scientific and Technical Center of Artillery and Rifle Armament (Ukraine), Allison Transmyshen (USA) and other co-workers.

The coordinator and the driving force of the whole project was the ADCOM MANAGEMENT CHURCHING Company. Each member of the consortium made a feasible contribution to the creation of a new combat vehicle of the ground forces. For example, Kharkov machine builders were responsible for the development of the chassis and the integration of all the systems of the machine and weapons on the chassis. The engine was made in Germany. The power plant and transmission was installed in the Kharkov engineering design bureau for them. A.A. Morozova together with the companies Deutz AG and Allison Transmyshen. The armament of the armored personnel carrier was designed by the State Scientific and Technical Center of Artillery and Small Arms of Ukraine. And although outwardly the new BTR is very similar to the Soviet BTR-80, the creators claim that the combat vehicle is completely new and not a modernized Soviet model.

Ukraine is taking measures to establish the export of military equipment and weapons and the beginning of the effective and speedy rearmament of its own army. But there are not enough financial resources in the country to carry out such ambitious plans. Given that some enterprises are in private hands, and defense enterprises are subordinate to various departments, the solution of the task of rearmament is much more complicated. It is not known how long Ukraine will be able to retain its leading position as a global arms supplier in such a situation. In addition, the Ukrainian authorities have not formulated any real strategy for the development of their defense industry. It is unlikely that participation in international consortia on the development of weapons and equipment will allow Ukraine to strengthen its political and economic position in the world.

Ctrl Enter
Noticed oshЫbku Highlight text and press. Ctrl + Enter
We are
Army 2015: Defense SupermarketExport of Ukrainian armored vehicles to 2005-2011gg.
1 comment
Information
Dear reader, to leave comments on the publication, you must to register.