August 30 2013
80
At the end of the fifties of the last century, the ZU-23 anti-aircraft gun was created, which received the nickname "Zushka" in the troops. At that time, the rate of fire at the level of 2 thousand rounds per minute, the power of 23 mm ammunition, the firing range of up to 2,5 kilometers and the accuracy of the fire were sufficient to perform a wide range of tasks. However, after several decades, due to the active development of the military aviation and its ammunition, the characteristics of the ZU-23 do not allow to effectively reflect air strikes. Considering the large number of anti-aircraft guns preserved in the troops, several years ago various design organizations of the defense industry began work on modernization options for the ZU-23, designed to bring about the characteristics of this weapons to acceptable values. 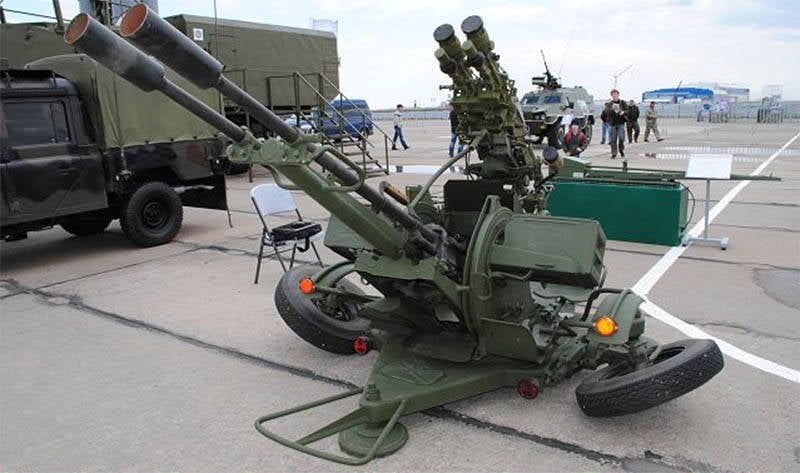 The Podolsk Electromechanical Plant (PEMZ Spetsmash) showed its new development at the Innovation Day of the Ministry of Defense exhibition held a few days ago. Spetsmash designers have created another original version of the modernization of the outdated ZU-23. As stated, the anti-aircraft installation ZU-23 / 30М1-3 in its capabilities is many times greater than the original design half a century ago.

As a basis for the installation of the ZU-23 / 30М1-3, the slightly modified ZU-23 with the original 2А14 machines, a gun carriage, a wheel drive, etc. was taken. At the same time, several new units were introduced into the installation. To the right of the guns, above the ammunition box, the ZU-23 / 30М1-3 is mounted with an electronics unit with means for detecting and tracking targets. The anti-aircraft gunner, whose workplace is to the left of the guns, independently or with third-party help, finds the target and roughly directs it with guns and an aiming system. Next, the opto-electronic unit with a thermal imaging channel and a laser rangefinder takes aim at the automatic tracking and calculates the necessary lead values.

At this time, the anti-aircraft gunner ZU-23 / 30М1-3 can monitor the progress of combat work using a monitor installed at its workplace and make necessary corrections through the control panel. Accompanying the goal is carried out automatically, so that the gunner can only give the appropriate command and open fire. An interesting feature of the ZU-23 / 30М1-3 is the fact that automation not only independently calculates all the parameters necessary for firing, but also induces guns without human intervention.

If necessary, the updated ZU-23 can hit targets with guided missiles. To this end, Igla-S man-portable air defense systems are mounted on a special bracket above the guns. MANPADS are connected to the general fire control system, after which their combat use is possible. The principle of operation of the missile-artillery system when using missiles is somewhat similar to the algorithm for firing from guns. The gunner must also find the target and turn on its automatic tracking. Next, the rocket homing head finds a target and a launch is possible. 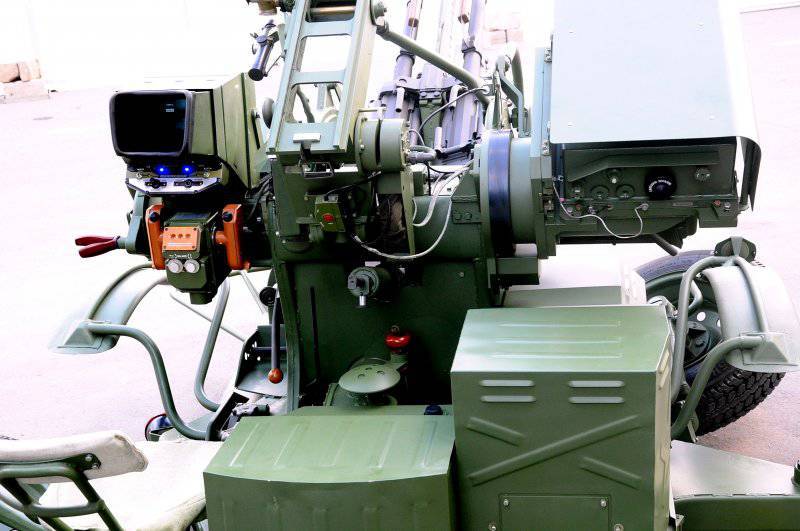 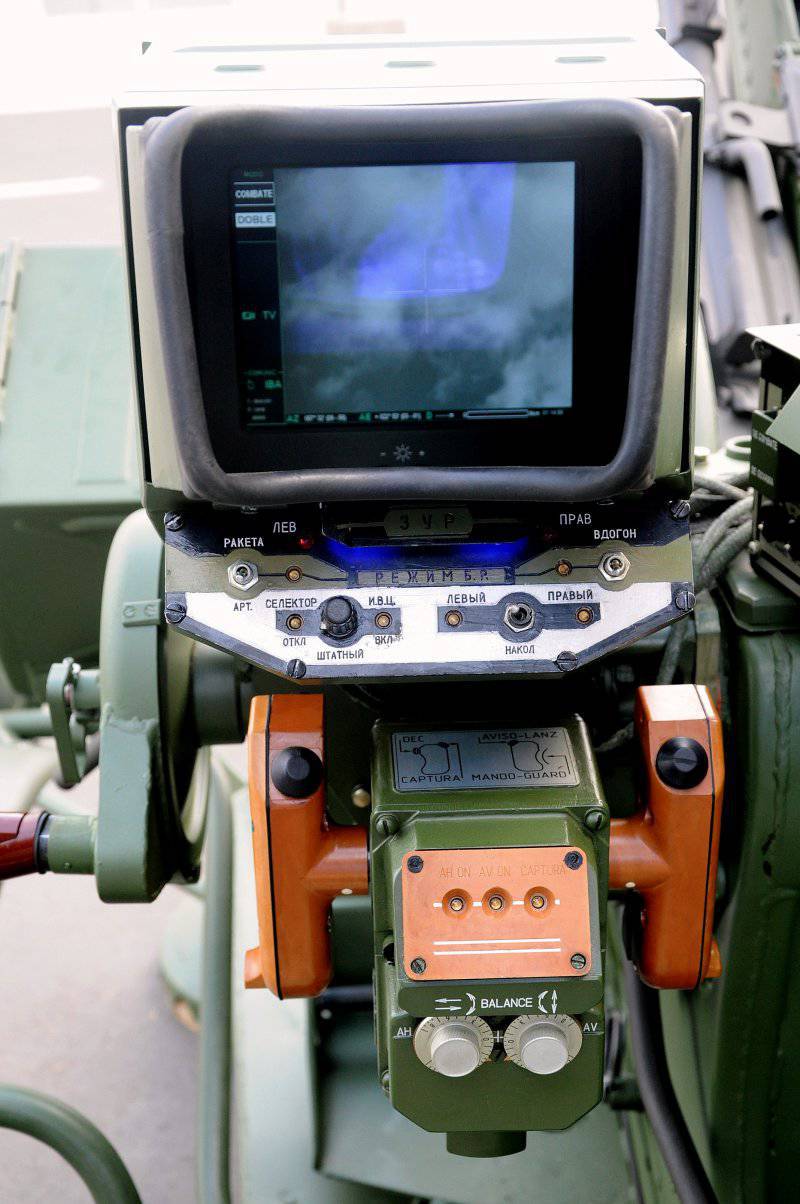 As far as is clear from the available information, the whole modernization of the ZU-23 anti-aircraft installation made at PEMZ Spetsmash concerned exclusively electromechanical and electronic systems. In this regard, the firing characteristics of the updated artillery system remained the same. ZU-23 / 30М1-3, like the original Zushka, is capable of effectively hitting low-speed targets like strike airplanes and helicopters at distances up to 2,5 and altitudes up to 1,5 kilometer. The rate of fire is up to 1000 rounds per minute on each barrel. After installing the electronic equipment, the ZU-23 / 30М1-3 was noticeably heavier in comparison with the original design, but there are no exact data on this.

In general, it can be recognized that the modernization of the outdated ZU-23 anti-aircraft installation, carried out at the Podolsk Electromechanical Plant, does significantly increase the combat potential of the artillery system. However, due to the use of the old and inconsistent with the original requirements of the original design, the new installation ZU-23 / 30М1-3 in the conditions of a real war is likely to receive only limited use. The fact is that the development of air attacks has long allowed aircraft and helicopters to hit ground targets without entering the zone of action of anti-aircraft systems like ZU-23.

However, despite the insufficient characteristics of the artillery unit, the installation of the ZU-23 / 30М1-3 has several interesting features that greatly enhance its combat potential and capabilities in wartime conditions. Compatibility with missiles, even with short-range MANPADS (the range of the Igla-S complex is up to 6 kilometers), significantly increases the range of the entire anti-aircraft system. In addition, since all surveillance and tracking equipment, with the exception of a laser rangefinder, does not emit anything while on duty or combat, ZU-23 / 30М1-3 can be very effective for repelling air raids at night. The only condition necessary for full-fledged work in such an environment is additional external target detection at the approach to the zone of defeat of an anti-aircraft gun and target designation.

Due to the insufficient characteristics of the initial artillery installation, the project ZU-23 / 30М1-3 may still remain at the development and testing stage, without interest of potential customers. At the same time, a large number of ZU-23 anti-aircraft installations and active deliveries of these weapons to friendly countries that have been practiced in the past can help the PEMZ Spetsmash project find its niche. An electronics complex that makes ZU-23 / 30М1-3 from “Zushki” is able to interest third countries that are actively using old anti-aircraft systems of Soviet manufacture. It is likely that the modernization of foreign weapons under favorable circumstances in the near future will be the main prerequisite for the widespread use of the ZU-23 / 30М1-3 or other projects of this kind.