Two news from the concern "Almaz-Antey"

August 29 2013
32
The international aerospace salon MAKS-2013, which began on Tuesday, became a convenient platform for demonstrating the latest developments. At the same time, according to the traditions of this event, the exhibits of the participating companies include not only airplanes, helicopters or unmanned aerial vehicles, but also air defense systems. This time, the Almaz-Antey Air Defense Concern presented at once two of its latest developments.

The first of the projects is the Vityaz C-350 medium-range anti-aircraft missile system in export version (C-350Е). The existence of this air defense system became known a long time ago, but for the first time on MAKS-2013 it is demonstrated to the general public for the first time. At the site of the air show there are three vehicles from the Vityaz complex: a self-propelled 50P6E launcher with 12 transport-launch containers of anti-aircraft missiles, a multifunctional radar station 50H6Е and a command and control station 50K6Е. All the machines of the anti-aircraft complex are made on the basis of four-axle automobile chassis produced by the Bryansk Automobile Plant. 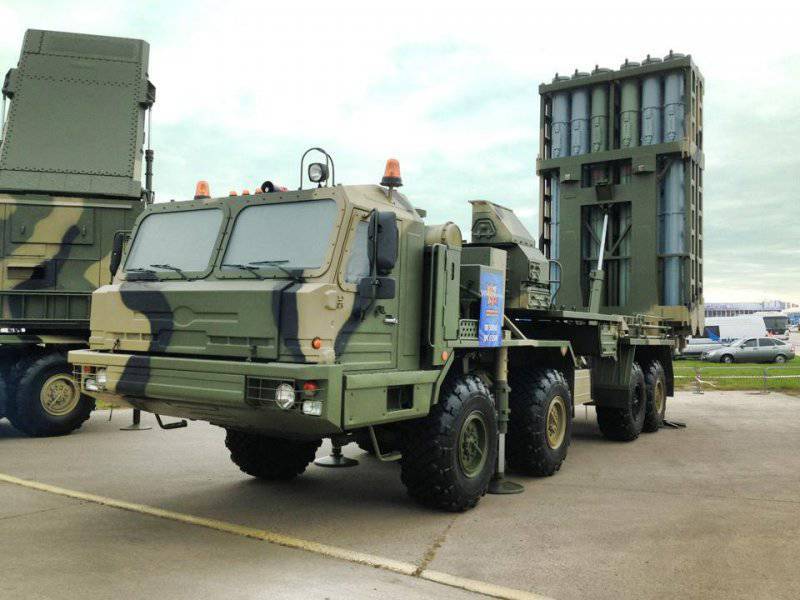 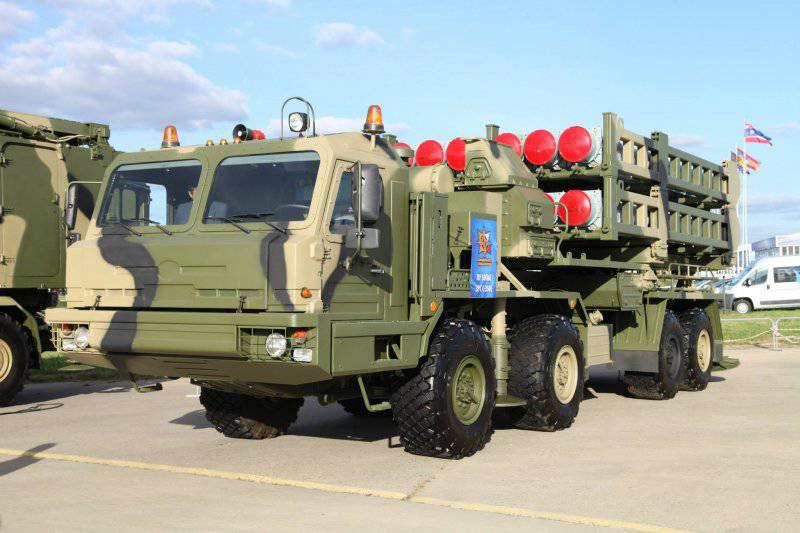 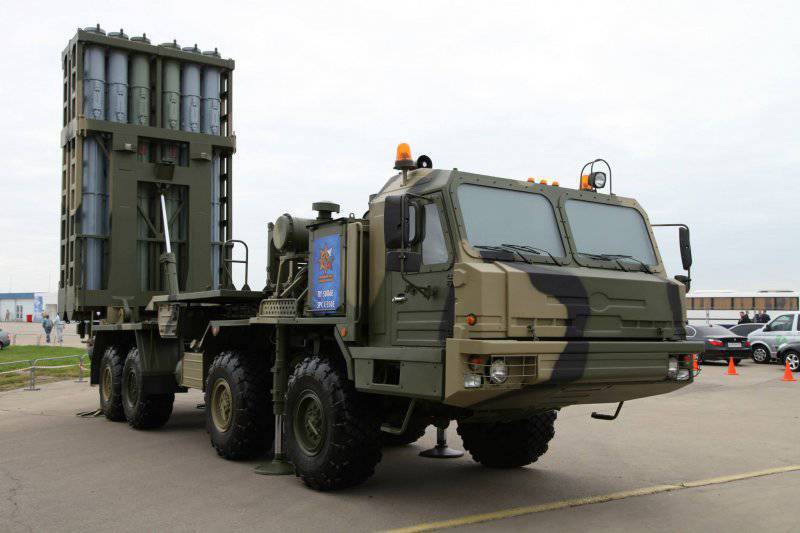 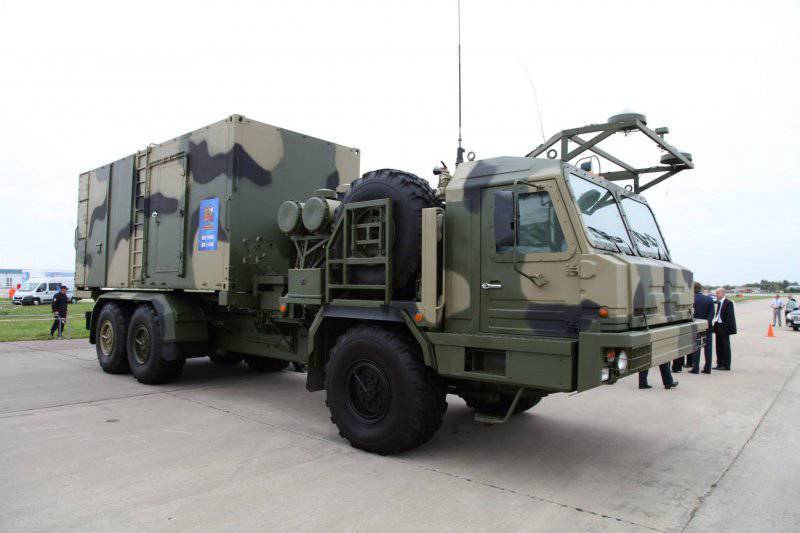 The command and control station 50K6E ZRS C-350E "Vityaz" in the exposition of the air show MAKS-2013. Photo by Vitaly Kuzmin, https://www.facebook.com/77RUS 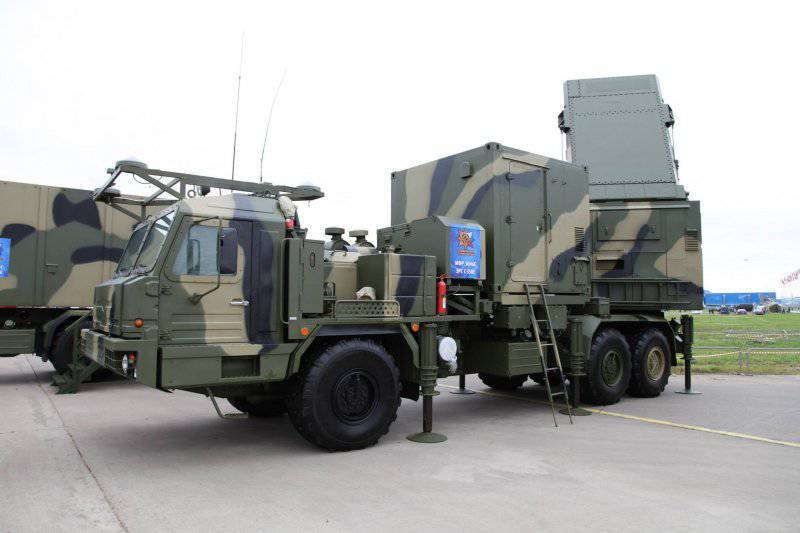 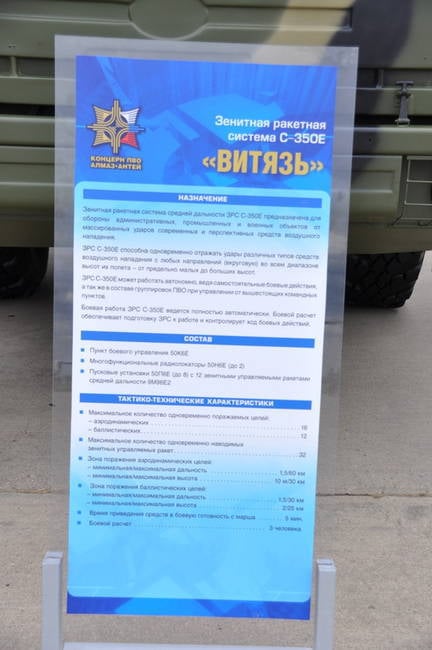 The following information is indicated on the advertising poster describing the Vityaz C-350 “Vityaz” air defense system. The complex is designed to protect military, industrial and administrative facilities from air attack with the help of modern and advanced weapons. The complex provides all-view protection of objects in the whole range of available heights and distances. Depending on the situation, the Vityaz air defense system can operate autonomously, independently determining and attacking targets, or as part of an air defense force. In the latter case, the management of the complex comes from third-party command posts. Reportedly, the C-350 air defense system is capable of operating in fully automatic mode. The tasks of combat crew of three people include the preparation of systems and control over their work. It takes about five minutes to bring the complex from the traveling position to alert status.

The Vityaz complex consists of three vehicles (command post, radar station and launcher), which can be combined into a battery depending on the current situation. According to official data, one combat control center 50K6Е can simultaneously receive information from two 50Н6Е radar stations and control eight 50P6Е self-propelled launchers. Each of the launchers carries 12 9М96 guided missiles.

The capabilities of the C-350 ЗРК allow you to simultaneously attack and hit up to 16 aerodynamic or up to 12 ballistic targets. Ground control equipment capable of simultaneously directing targets up to 32 missiles. Thanks to such capabilities, the destruction of aerodynamic targets at distances from 1,5 to 60 kilometers at altitudes from 10 to 30 thousand meters is ensured. The range of hitting ballistic targets ranges from 1,5 to 30 km, the altitude range from 2 to 25 kilometers.

The second no less interesting sample presented by the Almaz-Antey concern is the autonomous combat module 9А331МК-1 "Tor-М2КМ" using the 9М331МК-1 rocket. A module equipped with all the necessary equipment can be installed on any suitable chassis. So, the sample presented at MAKS-2013 is mounted on a four-axle TATA brand Indian truck. If necessary, it is possible to install the 15-ton combat module "Tor-М2КМ" on any other wheeled chassis of a suitable class. 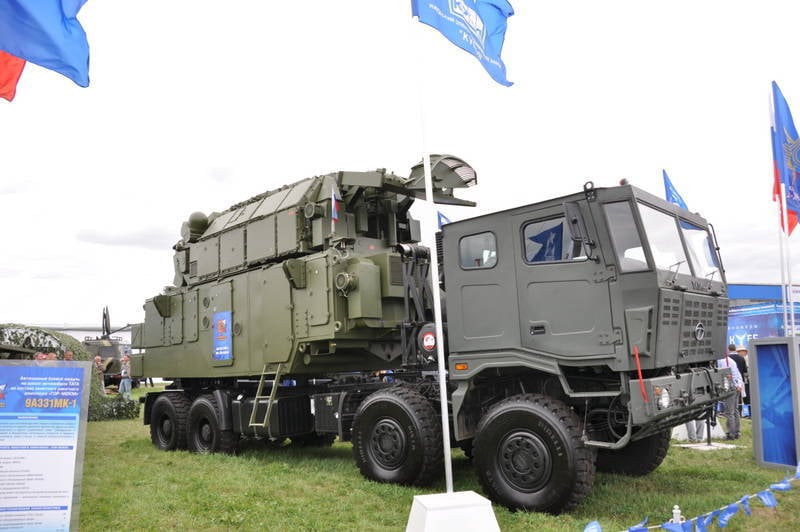 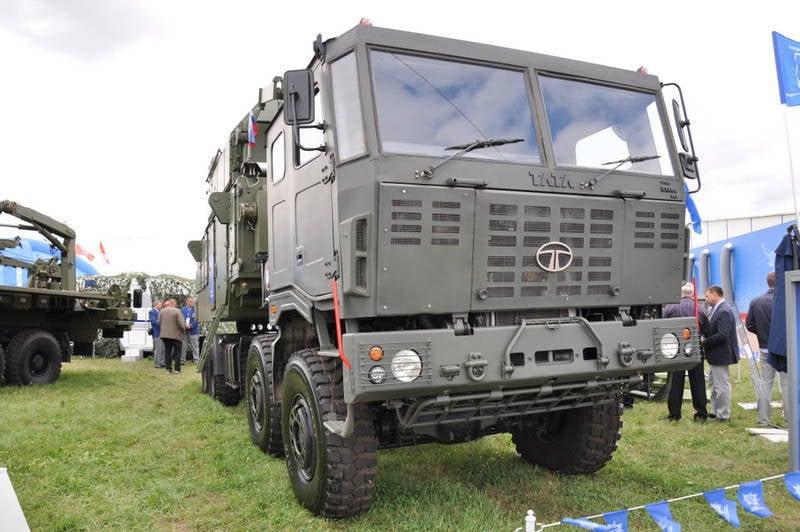 The Tor-М2КМ SAM system in the modular design as an autonomous combat module 9М331МК-1 on the chassis of an Indian TATA vehicle with the wheel formula 8Х8 at the exposition of the MAKS-2013 air show. Photo http://bmpd.livejournal.com 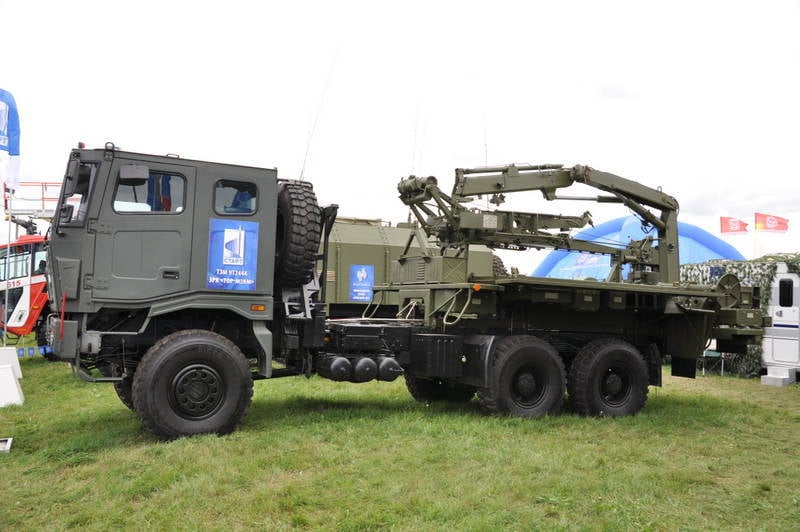 The 9Т244К transport-charging vehicle on the Indian TATA vehicle chassis with the 6х6 wheel formula from the Tor-М2КМ SAM system in a modular design at the MAKS-2013 air show. Photo http://bmpd.livejournal.com 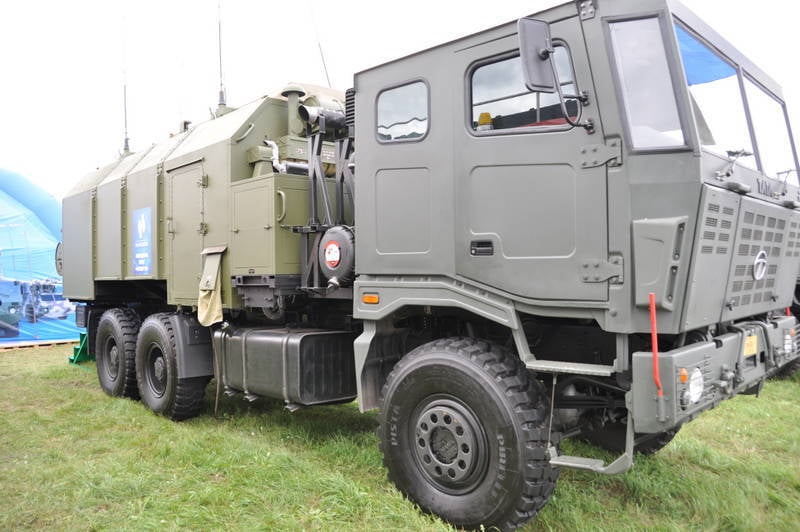 Battery command post on the chassis of the Indian TATA vehicle with the 6х6 wheel formula from the Tor-М2КМ SAM system in a modular design at the MAKS-2013 air show. Photo http://bmpd.livejournal.com 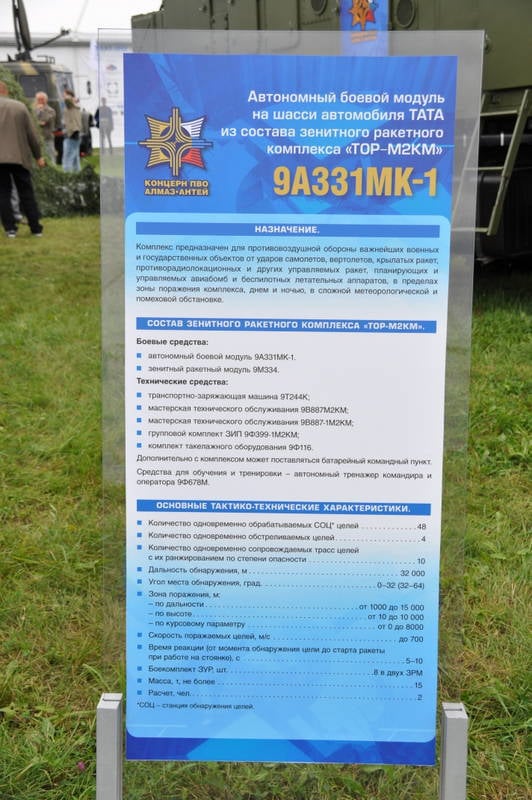 The standalone combat module 9А331МК-1 is capable of performing the same tasks as the previous complexes of the Tor family. It is designed to protect important objects from air strike at any time of the day and in any meteorological conditions. In addition, the possibility of escorting and air defense of the troops on the march is probably preserved. According to the information presented at the exhibition, the Tor-M2KM air defense system consists of the following components: the 9А331МК-1 autonomous combat module, the 9М334 anti-aircraft missile module, the 9Т224К anti-aircraft missile module, maintenance workshops, spare parts kits and rigging equipment If necessary, the customer can additionally purchase a battery command center and simulators for preparing calculations.

The TOR-M2KM airborne target detection system is capable of simultaneously processing up to 48 targets, 10 of which can be taken on tracking with automatic priority determination. Complex equipment can direct missiles at 4 targets simultaneously. The radar of the Tor-MXNUMKKM complex is capable of finding targets at distances up to 2 kilometers. Defeat targets at distances from 32 to 1 kilometers at altitudes within 15-10 meters. The maximum speed of the attacked target is 10000 m / s. The combat module has ammunition of eight guided missiles 700М9МК-331. The launch of the first rocket after detecting the target (reaction time) takes no more than 1-5 seconds.

It’s too early to speak about the prospects of two new anti-aircraft missile systems. Both complexes have only recently appeared in the form of prototypes and at the present time they are probably only preparing for tests. Nevertheless, the very fact of the demonstration of developments at an international exhibition speaks volumes. This means that in the near future, potential buyers will be able to learn more about the new Russian developments. In the case of the Tor-M2KM autonomous combat module, we can also expect the imminent signing of the first supply contracts to third countries.