Sochi is trying to say goodbye to migrant workers

August 29 2013
63
Less than half a year remains before the opening of the 22-s Winter Olympic Games in the southern capital of Russia - Sochi. And the closer the date of the approach of such a grand sporting event, the greater the headache manifested by the local authorities. And the local authorities - this is at least. And higher-ranking officials are concerned with how to simultaneously solve two big problems related to preparations for the Olympics. The first problem: how to finish all Olympic venues at an acceptable quality level in time? Problem two: what to do with the migrant migrant army workers, many of whom have already managed to “settle down” in Sochi and its surroundings? 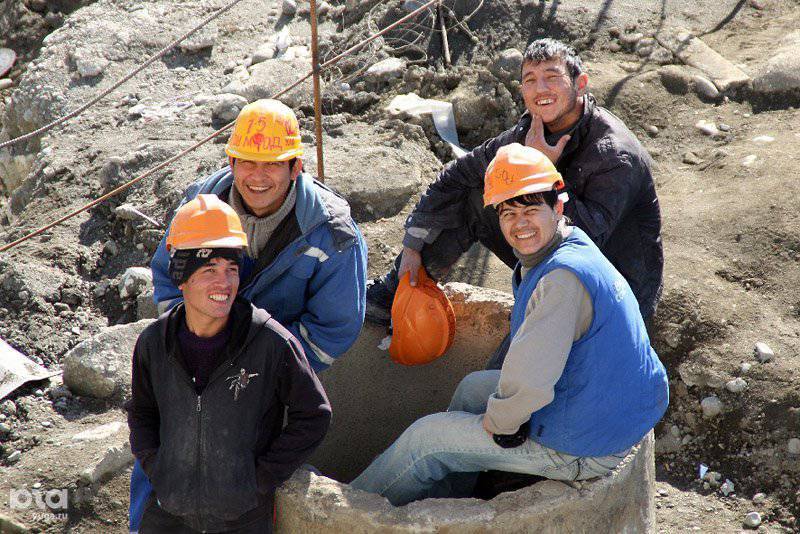 The headache of the Kuban authorities is also manifested because these two problems are closely related. The fact is that if we now begin active work on sending labor migrants who arrived in Sochi, including from the former republics of the Soviet Union, to their homes (not to Adler’s rented apartments and carriages near Krasnaya Polyana), then all the Olympic facilities were erected within the framework of the implemented plan? .. And if you delay labor migrants with the “wires”, then doesn’t it happen that guests from sunny Tajikistan, Kyrgyzstan, Uzbekistan, Moldova and other countries of the so-called Near Abroad will want to stay not only in quality stve viewers international sporting event, but also as permanent residents of the region? ..

Yes, a whole dilemma for the governor Tkachev, especially considering that according to the most modest estimates, the number of labor migrants in the area of ​​the construction of the Sochi Olympic facilities is at least 60 thousand people, of whom about a third are foreign citizens (with a total population of Greater Sochi approximately 430 in thousands of inhabitants). Here we need to make a reservation that this assessment of the number of so-called guest workers in Sochi gives Sochi ATC. But after all, by no means all foreign citizens arriving at work in Sochi are ready to provide a full range of data about themselves to local regulatory agencies.

The so-called independent statistical services give a figure of roughly 80-90 to thousands of foreign workers alone in Sochi. For objectivity, we average the data provided by law enforcement agencies and data from other statistical offices. It turns out that 50-60 thousand is the approximate number of only citizens of foreign countries who in recent years have arrived in Sochi and its environs in order to find work at construction sites, catering establishments, in the field of tourism business, etc. At the same time, about two thirds of them are persons who work either illegally or semi-legally. Will this army of foreign workers want to leave the place and go "for 101-th kilometer" before the start of the Olympic Games? - serious question.

Today, representatives of the labor department of the Kuban, as well as the leaders of the trade union district committees handed over to contractors involved in the construction of facilities for the Olympics, the following wishes: they were asked to take all possible measures to ensure that all foreign workers employed at their sites left Sochi as soon as the object entrusted to them erected. Simply put: built - thanks - time to go home!

This decision was also discussed in the framework of the regional Security Council, which was also ruled by the Kuban governor Tkachev. Apparently, before Tkachev and set the task quickly and quietly send migrant workers to their homes in the sunny republics after construction. At the meeting, perhaps for the first time in Russia, the very specific term “removal of migrants” was used. Several gives something from the series "tooth extraction" and "removal of kidney stones," is not it ...

But the terms are terms, but what’s more difficult: removing a migrant worker after he completes his work from Sochi, or removing a stone from a sick kidney is also an interesting question ... Not every guest from the same Tajikistan will decide to leave the resort city, especially if the contractor will give him a calculation.

In order to designate the direction of their further actions to contractors now, it was decided at the Security Council meeting: to recommend to building organizations to create registries of all workers employed at their sites (by the way, why wasn’t it done initially? ..), as well as for some of the money earned by foreign workers buy them tickets to the house and solemnly present them when paying the rest of the final salary. If all contractors do exactly as the Kuban Security Council "recommended", then the "removal of guest workers" will be completed in 10-days after the completion of the construction of various Olympic facilities.

It can be assumed that not every foreign worker will be delighted to receive a “van wei ticket”. An impressive percentage of guests from the near abroad will quickly fall to the railway station and the airport in order to exchange it for cash again. How will their contractors convince them not to take such steps? Of course, there will be those who decide not to spend money in the Olympic Sochi, but how many such “economists” will there be? ..

By the way, the Krasnodar Security Council for some reason forgets that thousands of foreigners visiting the region work not at all at the Olympic construction site, but, for example, in the service sector: they are numerous janitors, janitors, porters, dishwashers, cook assistants, waiters, maids, etc. These people do not have any project plans, and therefore the option “prepared pilaf — come on, bye-bye!” Doesn’t exactly fail ... Does the governor Tkachev know the mechanisms for “removing” these migrant workers too? .. Well, if only Farewell to Sochi, to health Moscow! "
In order to control the “removal”, it was decided to break up Big Sochi into separate sectors, each of which will be supervised by a certain group of law enforcement officers. In this regard, another question arises: will not the "curation" of individual sectors of Sochi by specially ordered policemen for this cause a new wave of corruption related to the Sochi objects? Could it be that they will send home those who did not want to share with the “curators”?

After the meeting of the Security Council of the Krasnodar Territory in various parts of Sochi, raids began to uncover the presence of illegal labor migrants in them. Raids take place in the Adler, Khostinsky and Lazarevsky districts. Representatives of the Federal Migration Service are exposed to construction sites in the central part of Sochi. At the same time, many indigenous residents of Sochi express the view that appeals to “remove” guest workers coming from local authorities may be useful to those contractors who do not want to fully pay for their work with foreign workers: he bought a ticket home, gave a penny pocket money - and goodbye, brother ... Not every migrant worker will decide to defend their rights in court, if we also take into account the fact that most of the labor migrants knew perfectly well what they were doing without signing labor contracts.