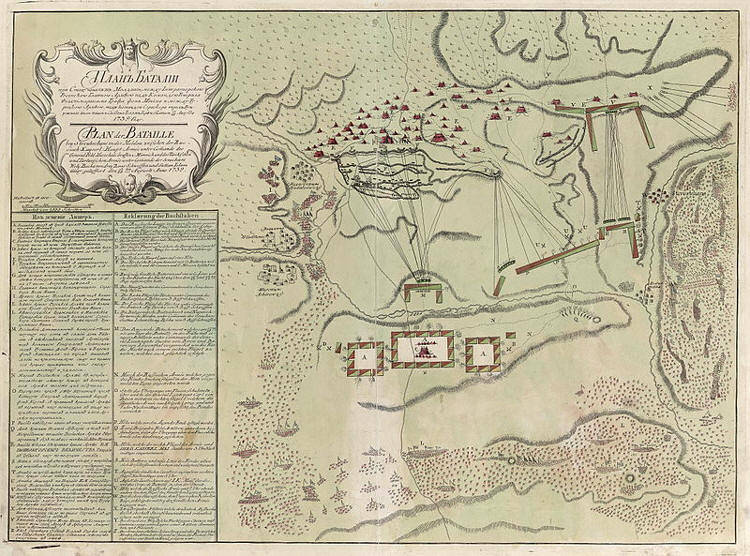 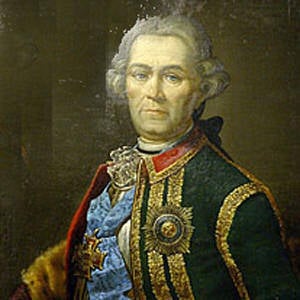 In the first half of the XVIII century, the Crimean Khanate and Turkey behind it remained the most dangerous opponents of Russia, and in order to rid the country of the Crimean raids, it was necessary to destroy the enemy's nest.

The first of the Russians to the Crimea were the forces of Field Marshal Munnich. On April 20, the fifty-thousandth Russian army, headed by Minikh, came out of Tsaritsinka, the former gathering place, and on May 1736 entered the Crimea through Perekop, dropping the Crimean Khan with the army. Having taken the Perekop fortifications by storm, the Russian army went deep into the Crimea and ten days later entered Gezlev, seizing there nearly a month's supply of food for the whole army. By the end of June, the troops approached Bakhchisarai, having sustained two strong Tatar attacks in front of the Crimean capital, took the city, which had two thousand houses, and completely burned it together with the Khan's palace. However, having stayed in the Crimea for a month, the Russian troops retreated to Perekop and at the end of the autumn returned to Ukraine, having lost directly from the fighting two thousand people and half of the army from diseases and local conditions.
In retaliation for the campaign of Minich in February 1737, the Crimean Tatars made a raid on Ukraine across the Dnieper from Perevolochny, killing General Leslie and taking many prisoners, but the more Crimeans who again lost a lot of people were no longer able. 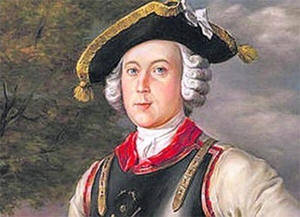 Baron Karl Friedrich Jerome von Munchhausen, who took part in the Stavouchan battle. It was on this day that, according to a later legend, he flew at the core over the Turkish positions.

In the summer of 1739, Minich resumed the offensive against the Turks. In early June, 1739, he crossed the Dnieper, and 15 August was already beyond the Dniester. To repel the offensive of the Russian army, the commander-in-chief of the Turkish army, Veli-Pasha, concentrated on the positions at Stavuchany all the troops that he could muster in the region, including the Khotyn garrison. The army reached the size of 70-90 thousand people: 15-20 thousands of Janissaries, 8-20 thousands of spas and Serbej, 7 thousands of Lipcans and 40-50 thousands of Crimean Tatars. Army artillery consisted of 70 guns. The Russian army numbered 61 thousands of people with 250 guns, including 85 field guns. About 5% army personnel were sick and did not take part in the battle. A significant part was the non-combatant element, which was located with a huge wagon train of the army. In the battle itself, “with a gun in the ranks,” 48 thousands of people participated.

Waiting for the approach of the army of Count Minikh, Veli-Pasha sent the Tatars to the rear of the Russian army, trying to encircle the enemy troops. The Turkish cavalry commander placed on the flanks of his army. Thus, for the defense of the main positions, stretched for five miles, Veli Pasha left around 20 thousands of people. To ensure the best defense, Pasha concentrated on the defense of the western part of their positions, directly covering the road to Hotin. To organize the defense, the Turks built 11 batteries armed with 60 units with mortars and cannons in this area and built a triple line of trenches. The trenches on the right flank adjoined the village of Nedoboevtsy and had a length in 3 versts. Recent work on the trenches were made on the night of August 28, when the Russian army had already entered the area. As a result, the left section of the trenches, which was a mile in 2, was not occupied at all by the Turkish troops. 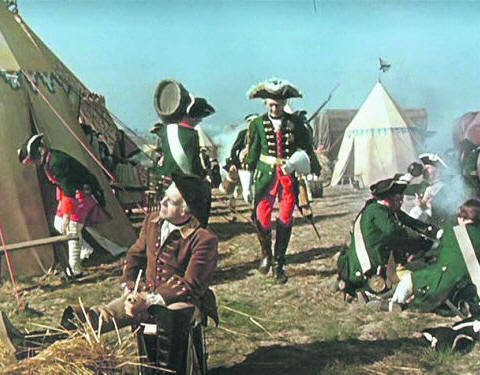 The Russian army 27 August evening came out to the river Shulanets, where she camped. After conducting reconnaissance, Count Munnich became convinced that his army was tightly surrounded. Crimean Tatars and Turkish cavalry surrounded the Russians in the rear and on the flanks. Ahead, Munich had the 20 of thousands of Turkish infantry, which "in mountainous places, which are already very strong and advanced, was very heavily in position." But at the same time, the field marshal noted that “the enemy was in front of his right wing, against which our army stood, the work of the retransams and batteries continued, and the left wing, which, although in the foreground position, however, was not danced”.

After weighing the situation, realizing the unfortunate location of his camp, which was subjected to artillery fire and attacks by enemy riders, lack of firewood and fodder, the inability to bypass maneuver, Count Minih "took the resolution of the 17 number on the enemy in his camp to attack", concentrating on the left flank the enemy. This was facilitated by the mood of the troops, which, according to the count, "showed a hunt almost unheard of for the battles and were very eager to get closer to the enemy as quickly as possible." According to the battle plan, part of the army was to produce a diversion on the enemy’s right flank, and the rest of the army delivered the main attack on the left flank. A detachment of Lieutenant General Gustav Biron composed of guards, two dragoon regiments, three infantry regiments and a certain number of irregular troops totaling 9 thousand men, with four howitzers and 30 guns, was assigned for the diverting maneuver.

Early in the morning of August 28, the detachment of Gustav Biron, depicting the avant-garde of the whole army, crossed the river and stood at a low altitude against the location of the cor de battalion two versts from the enemy positions. The general built a squad in a three-sided square with a long, in 800 steps, a front face and short, in 300 steps, side faces, joining them to the river. Howitzers were located inside the square in front of which the rest of the artillery was displayed. After this artillery duel ensued. The duel lasted until noon, but was ineffective. Thus, the Turkish gunners, firing 100 shots, could only injure one Russian horse. All this time, the main part of the army stood "in the gun", depicting a willingness to move forward behind the vanguard. Waiting for an ambulance attack, Veli Pasha, believing in the Russian intention to attack his right flank, began to concentrate his main troops here. At the same time, the Turks urgently began to build additional fortifications in this direction. Kolchak-Pasha, trying to prevent the crossing of the army of Minich, attacked her left flank and the Don Cossacks standing here.

At noon, Field Marshal Munnich ordered the entire army to turn right and advance to the confluence of the Shulanets River and the creek that flowed near the village of Dolyna. The detachment of General Gustav Biron turned around and crossed back across the river, taking their places in the army's order of battle. Veli-Pasha took such maneuvers for retreating the Russians and even sent news of the victory to Khotyn. Soon the Turks realized their mistake and began to transfer troops to the left flank, where they began building new batteries. Genj-Ali-Pasha and Kolchak-Pasha tried with cavalry to attack the enemy's army at the crossing, where the Russians, after the crossing, had to climb a low but steep bank. To counter attacks, Minich identified two brigades of field artillery. Slowly, taking the whole huge train, the army moved in three squares, "taking the management to the right."

Ahead, under the cover of artillery fire, there was a detachment of Lieutenant General Karl Biron with the right wing of the army, who threw fashin into the river, built 25 bridges to transport the army. Overcoming the river in the second hour of the day, the detachment of Karl Biron, occupied the heights of the left bank and organized the cover of the crossing of the rest of the army. Turkish cavalry tried to attack the detachment and converged with the Russian hussars. Thanks to the support of artillery, all attacks were repulsed and did not bring the Turks any result. Following the right wing, the guard crossed under the command of Gustav Biron, then the Cor-de-Battle, and then the left wing under the command of General Ulrich Levendal. The crossing ended at one o'clock in the afternoon.

After the crossing, the Russian army lined up in one square, inside which was the entire wagon train, and slowly moved on the enemy, constantly stopping because of the convoy. At five o'clock in the afternoon, when the army was passing near Stavuchan, the Turks launched a decisive attack. 12-13 thousands of Janissaries attacked from the front, Turkish cavalry from the right flank. The Russian army stopped and, clinging to the slingshot, opened gunfire and artillery fire. The Turkish cavalry, unable to bear the fire, turned around and went back beyond the Stavuchansky brook. Of the Janissaries, only about 3 thousand people reached slingshots, but having no success, they fled. Fearing for his train, Minich decided to abandon the pursuit of the enemy. Impressed by the failure of the attack, the Turkish troops, who were in position, set fire to their camp and hurriedly left in the direction of Hotin. Only cavalry and Crimean Tatars remained on the field, who were still trying to attack the enemy.

At 7 hours of the evening, the Russian army reached the Turkish positions and occupied the enemy camp. Here Genj-Ali Pasha tried to make a last attempt to attack the Russians. Collecting the cavalry, Pasha attacked the right flank of Munnich, but the fire of two artillery brigades upset the Turkish cavalry, which did not have time to join the battle. After that, the entire Turkish army turned to flight, pursued by irregular Russian troops.

The rout was complete, the Turkish army was scattered. Most of the Turks, including the Khotyn garrison, under the command of Veli-pasha and Genj-Ali-pasha went to Bender, some went to Prut, and the Tatars to Budjak. The winners got 19 copper cannons, 4 mortars, banners, lots of shells and tailing tools, 1 thousand tents, a large number of food carts and forage stocks.

Russian casualties were: killed 13 people, including one colonel of the Don army, and 54 wounded, including 6 officers. Count Minich explained such small losses by “the courage of the Russian soldiers and how much artillery and trench fire they were trained for.” The losses of the Ottoman army amounted to more than a thousand people killed, which they left on the battlefield. The consequence of this victory was the surrender of Hotin. On August X, NUMX, Commandant Kolchak-Pasha surrendered the city upon the request of Count Minich.

However, the Russian did not take full advantage of the victory. The Austrian allies concluded a separate peace with the Turks, in which Belgrade, Orsova and the entire Serbian kingdom ceded to the Turks. It was dangerous for Russia to continue the war, and through the French ambassador de Villeneuve negotiations began with Turkey on peace. Negotiations went on for a long time, finally in September 1739 of the year a peace treaty was concluded in Belgrade. Under the treaty, Russia reserved Azov, but pledged to destroy all the fortifications in it. In addition, it was forbidden to have a fleet on the Black Sea, and Turkish ships were to be used to trade on it.

Ctrl Enter
Noticed oshЫbku Highlight text and press. Ctrl + Enter
We are
Field Marshal Christopher Antonovich Minich: the capture of Ochakov, the brilliant Stavuchan victory and the overthrow of BironField Marshal General Christopher Antonovich Minich: Siege of Danzig and Defeat of the Crimean Khanate
5 comments
Information
Dear reader, to leave comments on the publication, you must to register.