The invasion of Syria will turn into an ethno-religious meat grinder: military experts 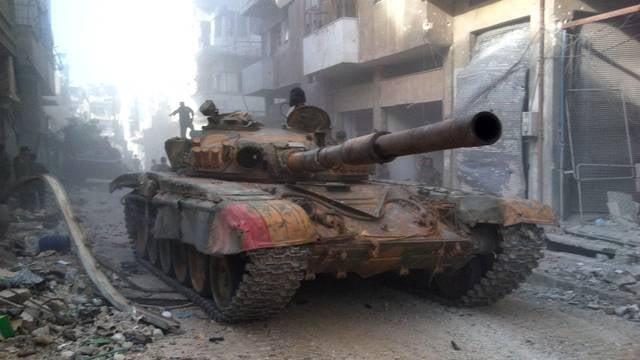 No decision to invade Syria is still pending. This was a REGNUM expert said Orientalist Russian Institute of Strategic Studies and Analysis Sergey Demidenko, commenting Raised in information media storm about the imminent start of the international military operation against the Syrian government. Judge urged not to jump to conclusions and comprehensively analyzed the situation and possible scenarios of its development.


"I would not hurry with critical assessments, especially since there is no informational reason for this. However, he is - Bashar Assad is accused of serious crimes - mass murder of the population, the use of chemical weapons, and so on. World media picked up this trend, now it sounds the so-called “white noise.” But first you need to understand what happened after all, who used the chemical weapon. On the other hand, words and statements are one thing, and the US president really does not want to get involved in the Syrian conflict not in word, but in deed. After the American leader announced the “red line” for Assad - the use of weapons of mass destruction - several messages emerged in the media on this topic, which the administration of the US president simply ignored. In addition, even last Friday, Obama gave an interview to CNN, where he quite unequivocally said the following: without international sanctions, the United States would not go to the intervention in Syria. At the same time, the presidential administration of the United States, under the initiative of the Saudi-Qatari lobby, is under pressure, including through Congress, with serious pressure. But so far it is far from the desired effect, "said Demidenko.

Orientalist reminded that all information relating to an alleged intentions of the United States to invade Syria, taken from anonymous sources. "All that we know about the intentions of Americans, given with reference to the obscure, unnamed sources in the best case in the administration of President of the USA. We also have a public statement by the Minister of Defense of the United States of America, Chuck Hagel, but he said something? If you get a grasp of this promise, the Pentagon chief said the following: If a subsequent order of the Supreme Commander, we're ready. nothing sensational ", - he said.

At the same time, Sergei Demidenko repeated that the United States is not interested in participating in a full-scale operation, the introduction of ground troops into Syria, massive bombing, etc. "I do not exclude that if Americans, so to speak," get ", they can decide on individual point attacks on objects on the territory of Syria, some European partners of the United States may participate in it, this is also possible, but this will not solve anything, the overall picture will not change, and therefore it makes no sense.As for the large-scale invasion - a strategic war, the overthrow of B ballad Assad, control of the country, "the US does not need it, it is too expensive, uncomfortable and unpromising." In Syria, there is nothing to profit, "Demidenko said, adding that periodically popping up in the media and unimaginable oil and gas reserves are not confirmed and often prove to be a "duck". No serious geological and reconnaissance work, these data are not confirmed, he said.

According to the Institute of Strategic Studies and Analysis, without the participation of such a campaign in Washington to crank nobody can. "Talk about the fact that France and Britain could start such a campaign on their own, are not serious. Hypothetically, of course they can make several sorties, hitting multiple targets, but long and tedious to bomb Syria, following the example of Libya would be too expensive. Limited resources and against the backdrop of a very difficult financial and economic situation at home, Paris and London are unlikely to be solved by such costs, "- he said.

As for the Syrian neighbors, with whom Bashar Assad has a very ambiguous relationship - Israel and Turkey, then, according to him, there is nothing to worry about. "Israel took a principled position - cruel neutrality, even during attacks on targets on Syrian territory, Israel did not touch government troops, choosing for itself only warehouses with weapons and ammunition." In Tel Aviv they try to solve their problems with Hezbollah, , it's not enough that the Prime Minister of Israel Benjamin Netanyahu officially forbade the members of the Cabinet of Ministers to use the word "Syria" aloud in official speeches.In Israel, Assad will not say what they like, but clearly the ponies Bashar al-Assad regime, there will be such an Islamist rampage ... Today, Assad is the only shuttle from the Sunni rampage on the border with Israel, let's not forget that by definition, there is no Islamist who would love Israel. ", - the expert reminded.

On the part of Turkey, Sergei Demidenko noted that Ankara does not need to intervene. "Turks to the Kurds inside the country lacked only Syrian ones, while the latter openly supported the Syrian president, of course, Turkey can take it into its head to take advantage of the turmoil, take and introduce troops, annex half of Syria, and join it. "In addition, the introduction of troops into Syria for Turkey means derailing all the economic achievements of recent years." Taking several billion from the budget and throwing them into a Syrian cauldron is unlikely to decide in Ankara what they need, especially since to compensate them There will not be anything, "Demidenko said.

As for the forecast of the consequences of the invasion, if it still takes place contrary to common sense, Demidenko described them as "very sad." "Let's start with the fact that Syria will cease to exist, it will turn into a territory of chaos, where an unbelievable boiling cauldron of Alawites, Shiites, Sunnis, Wahhabis, Christians will appear on religious and confessional grounds, and there is also ethnic - Arabs, Druze, Armenians, Kurds ... And Syria is not Iraq, where there was a certain ethnoconfessional compactness, everything is mixed, especially in the west of the country, which means that in case of the collapse of Syria in the region, there will be a meat grinder, "Demidenko is sure.

Head of the Center for Military Forecasting Anatoly Tsyganok in an interview with REGNUM also estimated the likelihood of a ground operation against Syria small. "Syria is not Iraq or Libya, there is a regular, armed army that has been engaged in active hostilities for already 2,5 year, that is, it is not in a state of stagnation." If the West does decide to take such an ill-considered step, it will have to repeat the Yugoslav scenario, because it will not be possible to achieve international sanctions in the UN Security Council because of the tough position of Russia and China.In addition, in the elites of Western countries there is a discord on the Syrian problem.This feeling that the right hand does not know what the left hand is doing. the Western coalition intervened If the West was accused of this indirectly because of the support of Saudi Arabia and Pakistan, which financed terrorism almost all over the world, then after the invasion of Syria, any indirection would be inappropriate. This will mean one thing - direct, open and unequivocal support of international terrorism, "he stressed.

Tsiganok assigns a key role in the development of the script Iran. The expert recalled the statement of the deputy chief of staff of the armed forces of Iran Masoud Jazayeri that the invasion of Syria will be consequences for the United States. "The United States knows where the red line on Syria. Intersection of this line will result in the most serious consequences for the White House," - said Jazayeri.

"There should not be any discrepancies here: in case of a military operation against Syria, Iran will bring its troops to Syria, which will be possible thanks to the support of the Iraqi leadership, and Iran will also make every effort to block the Strait of Hormuz." In addition, the Iranian factor has the potential to play a deterrent role for the neighbors of Syria, Turkey and Israel, who if they decide to intervene, will face the need to fight on two fronts, in the case of Turkey, one can not discount the Kurds either in Turkey itself or in Siri And let's not forget the Lebanese Hezbollah, which supports Assad and has already proved its willingness to come to the aid of an ally, "said Tsyganok.

With regard to the formal cause of the escalation of the conflict, namely, reports of alleged use of chemical weapons by government forces against militants, the Gypsies questioned this information. "The Syrian authorities have been negotiating with UN experts for a long time, inviting them to inspect for the use of chemical weapons in Aleppo. The UNO members wanted to study not only the Aleppo case, but also to 'walk' across the country, at strategic points and sites. During the Iraqi campaign they did the same, and it was a screen for collecting intelligence right off the spot. But a compromise between the UN and Assad was finally found, the inspectors arrived in Syria, and in such a situation the president of the country had no need to use chemical weapons. the so-called "opposition", timed to coincide with the visit of the UN representatives, "the interlocutor expressed confidence.

In general, Anatoly Tsyganok described the situation in Syria as a "game on the verge of a foul", which is led by the West. At the same time, he was less skeptical about reports on the presence of large oil and gas reserves in Syria. "The Syrian conflict is a war for oil.In the spring of this year it became known that a small exploration company from Norway discovered huge reserves of energy resources in small Syria - oil and gas.The exploration and production of these resources would allow Syria to take the first place in the list of world oil exporters and gas .This is a tasty morsel to which the West wants to break, "- summed up the expert.

Ctrl Enter
Noticed oshЫbku Highlight text and press. Ctrl + Enter
We are
A great interview with Sergey Lavrov: about Ukraine, Obama and IranInterview by President Bashar Al-Assad to the Sunday Times
187 comments
Information
Dear reader, to leave comments on the publication, you must to register.