School decomposition. How do tolerastov 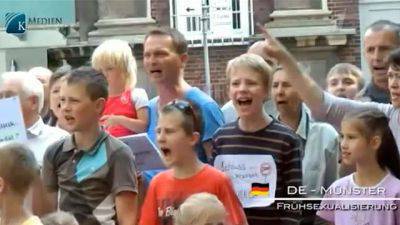 Certain aspects of Western European being increasingly resemble the content of the work in the anti-utopia genre. Not long ago, thirty years ago, the West unceasingly accused the Soviet Union of all grave, while one of the gravest sins of “the country of victorious socialism” was declared to suppress personal rights and freedoms of man and citizen. Today, home-grown liberals frighten the middle class and freedom-loving hipsters with the return of the scoop, again convincing the average man in the inevitability of suppressing the sovereignty of his personality in “this country” —that is what those who live in it, receiving education and earning good money, prefer to call Russia lately as a primitive savage on the statuette of the idol, look towards the West. But in fact, modern European countries, and precisely those that are traditionally considered to be the stronghold of democracy (Scandinavian states, Great Britain, Germany), carry an open threat not only to human rights and freedoms, but also morality, morality and, in the end , the very existence of the human race.


The other day, the whole of Germany was alarmed by the scandal around sex education classes introduced in secondary schools. As is known, the old Europe, the brave sons of which once conquered Africa, Asia, America, nowadays reminds, powders and puts on a skirt. Not the Scottish, covered with the glory of the legendary royal guard, and the mini-skirt street girls. Legalization of same-sex marriages and their adoption of children, the replacement of the words “father” and “mother” warm and beloved by everyone since childhood with prison-punishment stamps “parent is one” and “parent is two”, ordination to clergymen of open homosexuals, arouses doubts that that Europe still belongs to Christian civilization. But until recently, liberals of all stripes, right-and-protectionists, swore that their violent sexual fantasies, which are practically embodied in the struggle to legalize same-sex marriages, concern only adults, adults and people responsible for themselves and their actions. However, as many intelligent people, advocates of tolerance, assumed, not stopping on their achievements and following Trotsky's precept of a permanent, that is, constant and continuous, revolution, they went further, choosing children - the most defenseless part of society - as a victim of their sexual and political experiments.

In Germany, in secondary schools, there is a system of sexual education for students, essentially consisting in the naturalistic description of sexual relations, including homosexual ones. At the same time, the program is focused not so much even on high school students, as on children, for whom it is too early to think about sex. Remember yourself in seven - eight years old - what kind of sex? Cartoons, cars, teddy bears are a happy childhood time. But can you call the happy childhood of modern European children, who at the age of eight hand out textbooks with pornographic pictures?

In the town of Meschede, which is located in the industrial center of Germany - North Rhine-Westphalia, the father of the girl who refused to attend sex education was sentenced to a fine, and after refusing to pay the fine - to days in prison. That is, in the country, there is not only an outrageous course from the point of view of any sensible person to defile young schoolchildren with sex education lessons, but also clearly demonstrates the necessity of attending this course, the rejection of which is fraught with serious troubles with the law. There is no freedom of choice for parents and the children themselves. The obligation of sex education courses is almost more than the membership in pioneers in the Soviet era. You do not want - we will force - here is the whole of European democracy!

Recall that in the first half of the twentieth century, the ideas of leftist theorists who tried to rethink Marxist social philosophy, diluting it with Freudian psychoanalysis, were widely spread in European social democracy and the communist movement. Wilhelm Reich, who insisted on compulsory sex education and urged not to punish sex offenders, but treat them using psychoanalytic methods, died long ago, but his ideas were firmly entrenched in the ideological tools of the European left. The politicization of the family, family and sexual relations, formerly a truly private sphere of human activity, began precisely in the context of the systematic policy of left-wing liberals and social democrats who are in power in many European countries.

Having abandoned tradition, preferring illusory “freedom as permissiveness”, the left-liberal governments of Europe actually turn their states into totalitarian, controlling any citizen's step not only in the political plane, but also in the sphere of private relations. Juvenile justice, allegedly saving children from abuse and pedophiles, on the one hand, the lessons of sexual education and propaganda of homosexual relations on the other hand - all are the downside of the same process - the destruction of European society, European civilization and culture. Early sexual education with an accurate guarantee gives the involvement of children and adolescents in sexual relations, and early sexual relations against the background of propaganda of normal sex of the same sex - with a no less accurate guarantee will give new adherents involved in a friendly company of gays and lesbians.

Ultimately, the destruction of morality and ethics in modern Europe is beneficial to financial clans, the world oligarchy, interested in turning people into atomized cattle, completely devoid of any social ties. The alleged sociality of Homo Europus from the Berlin and London gay parades is just a rainbow label that seals up a hopeless world of loneliness, in which the only goal is consumption for the sake of consumption.

The situation with German schoolchildren and their parents in this context is very revealing. First, with harsh measures against overly conservative dads and moms, liberal officials make it clear that sex education in schools is not just a lesson, but a political strategy. A similar prosecution for absenteeism in math or geography is unlikely. Secondly, emphasizing that the father or mother will always find justice in the person of some juvenile justice, the power destroys the institution of the family, defining it as secondary in comparison with the school. Although common sense dictates to us: the school comes and goes, but dad and mom stay with a person forever, even after his death. Thirdly, the extreme focusing of public attention on the problems of sexual relations indicates that it is in this area that the front line between the forces of Good, which are designed to save the family, father and mother, childhood and adulthood, man and woman, humanity in the end, and the forces of Evil, destroying everything human, destroying society, family, morality, culture, history.

Judging by the way the European liberal public has taken up arms against Russia, whose authorities are still quite tough on legalizing same-sex marriage and promoting homosexuality, it should be assumed that it is this policy of our country that is one of the threats to ideology prevailing in most European states. We see how actively and purposefully the advocates of tolerance are working, seeking to involve Russian society in this demonic carnival of the global “minority parade”. Their countless provocative antics, such as the picket of a single homosexual on the Paratrooper's Day or the outcrop of feminists in front of church hierarchs, suggest that, having no real arguments in favor of their point of view, the advocates of tolerance in their defense of absolute deviations feel free to act in aggressive and vulgar demarches, trying to attract attention and ruffle Russian society. Yesterday, the West accused the Soviet Union of infringing dissidents, violating the rights of believers, today Russia, in which the church has received great preferences from the authorities, is strongly criticized by London-based wise men in London, Paris, and this time they see a violation of rights in the rebirth of national values minorities. What will happen next - time will tell ...

Ctrl Enter
Noticed oshЫbku Highlight text and press. Ctrl + Enter
We are
The West without the USSR: the world goes to an ideological explosionAlbert Pirmanov. Help, save! ...
104 comments
Information
Dear reader, to leave comments on the publication, you must to register.