August 29 2013
14
The International Aerospace Salon MAKS-2013, which is now taking place in the Zhukovsky city near Moscow, once again confirms its exhibition and commercial potential, being an occasion for the masses Newsconcerning new developments and sales of finished aviation technicians. The salon started only on Tuesday, but the number of news received from Zhukovsky is already more than large. Consider the most interesting news about the current state of aviation and the space industry, received on the first day of the exhibition.


More than a thousand companies and organizations from 43 countries of the world take part in the largest domestic exhibition. Almost two hundred different aircrafts are presented at the exhibition site, 82 of which will take part in demonstration flights during the show. The number of exhibits presented in the form of layouts goes to thousands.

The Russian aviation and space industry presented several interesting novelties at MAKS-2013. Thus, the first prototype of the Ka-62 multi-purpose helicopter is present in the static parking of the cabin. According to the holding company “Helicopters of Russia”, the work on this project is going in full accordance with the schedule. In particular, the third prototype of the new helicopter is currently being built at the Progress plant. 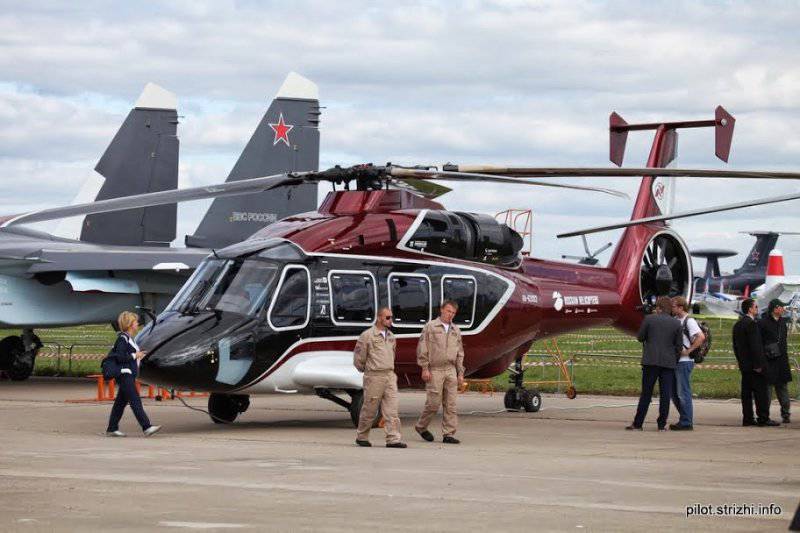 The first prototype of the Ka-62 helicopter in the “renewed guise” at the MAKS-2013 air show. Photo http://bmpd.livejournal.com 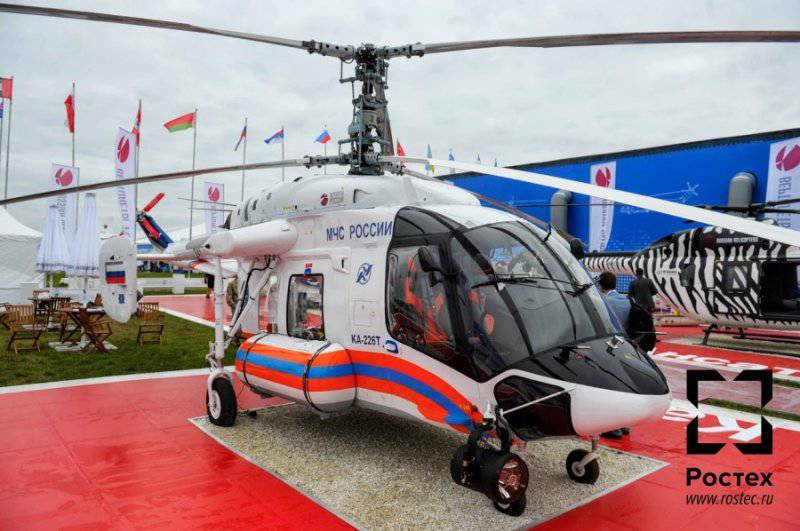 During the MAKS-2013, RSC Energia presented its new project of a promising manned spacecraft. In contrast to the currently used "Soyuz" new unit will be able to transport up to six people and up to 500 kg of cargo at a time. In addition, the project initially laid the possibility of multiple use of the descent capsule. According to the developers, the domestic project of a spacecraft in a number of parameters, as far as can be judged from open sources, is superior to the Orion apparatus developed in the USA.

At the aircraft parking there is a combat training Yak-130 in a new red color. Apparently, the only aircraft and the new coloring are in some ways echoes of the promises that were made several months ago. Recall that at one time there was information that the first public performance of the new aerobatic team flying to the Yak-2013 will take place at the MAKS-130 cabin. 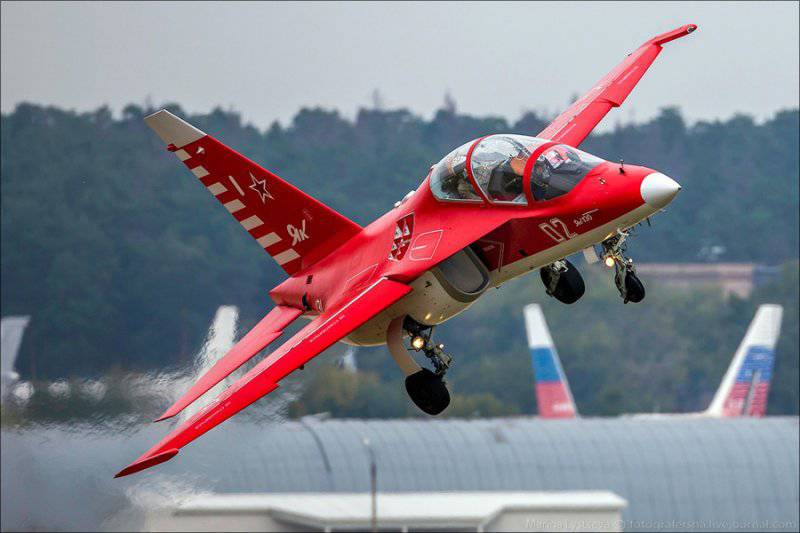 The exhibition shows the Il-76MD-90А transport aircraft, which is still at the testing stage. Great hopes are placed on this “air truck”: it is assumed that the production of such aircraft will make it possible to update the fleet of military transport aircraft and will have a beneficial effect on the state of the Russian aviation industry. Reportedly, tests will be completed in the coming months and the IL-76MD-90A will go into series. 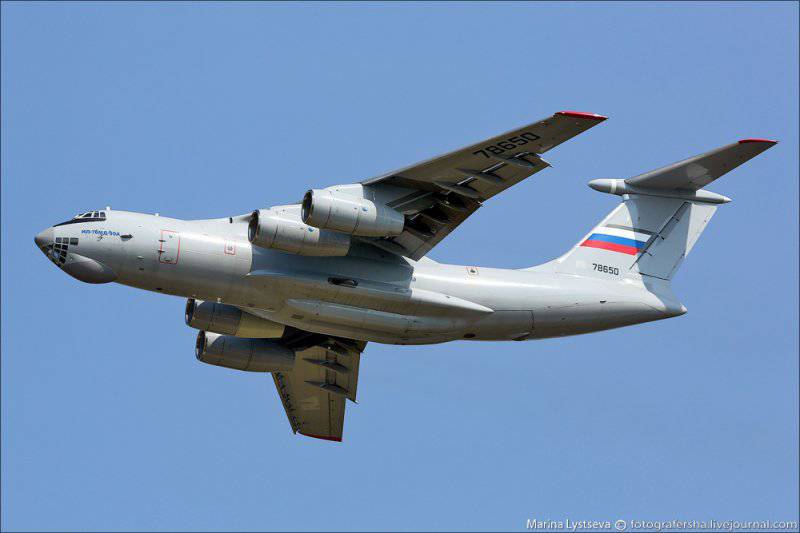 "The highlight of the program" of the air show was the fifth-generation Russian fighter T-50. It is not the first time demonstrated at the exhibition in Zhukovsky, but this time a much more extensive program is planned. Even before the start of MAKS-2013, it was reported that T-50 would participate in group flights and show pair aerobatics. On the very first day of the exhibition, three T-50 aircraft showed a group aerobatics, after which one of them, under the control of test pilot of the Hero of Russia S. Bogdan, demonstrated an individual flight program. 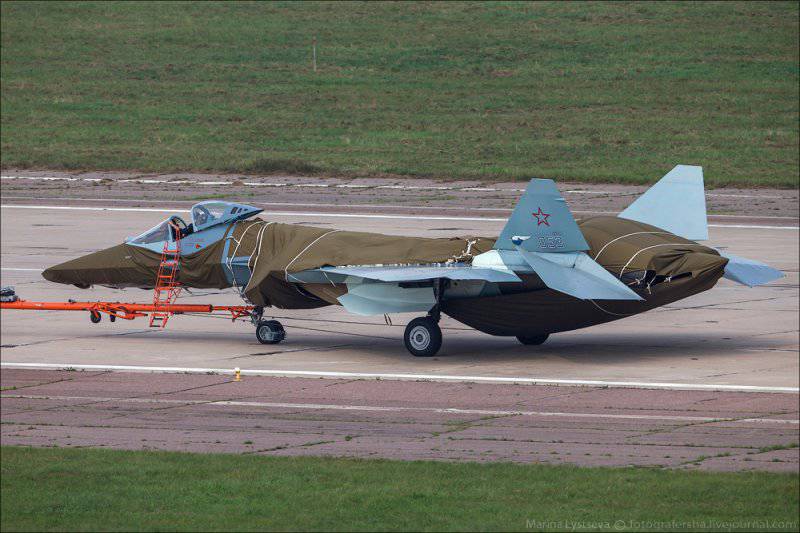 Foreign companies also brought a lot of interesting exhibits and promotional materials to Zhukovsky. For example, the company ADCOM Systems from the United Arab Emirates has presented its unmanned aerial vehicle United 2013 with Yabhon-Namrod missiles at MAKS-40. These projects are interesting because a few weeks ago in the media there were rumors about the possible purchase of a certain amount of United 40 by the Russian Ministry of Defense. There was no official confirmation or refutation of this, but the fact of the presence of a UAV drone at a Russian air show can serve as a pretext for various versions and conjectures. 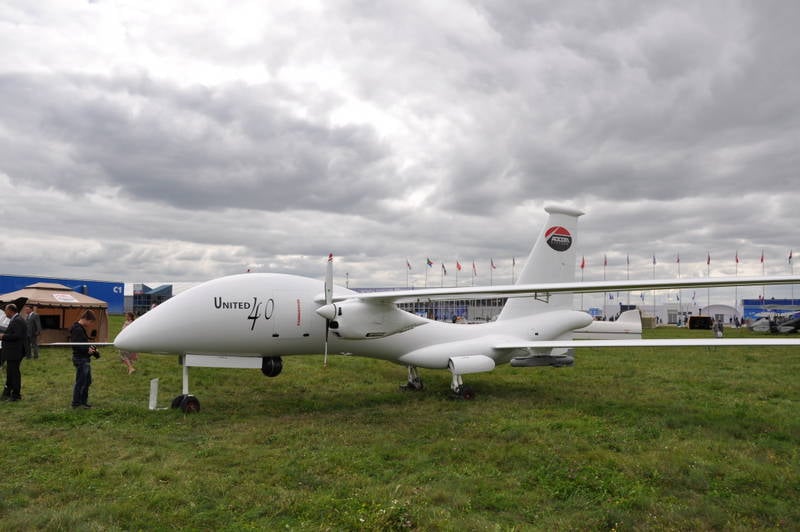 In addition to the designers from the UAE, dozens of other foreign organizations have presented their designs. On only one transfer of the brought projects will leave a lot of time.

As always happens at the MAKS salons, the first three days are intended for holding negotiations, conferences and other business events. Already on the first day of the exhibition, on Tuesday, the first contract was signed. Moscow State Technical Institute of Civil Aviation and Airbus Concern have concluded an agreement on joint training of specialists. As part of this agreement, the university will begin training personnel to work on aircraft produced by the Aurbus concern. Moscow experts together with their European colleagues have already compiled a program of lectures for fourth and fifth year students.

Also on the first day of the exhibition, another agreement was signed, implying long-term cooperation between aircraft manufacturers. According to the new general agreement, Russian Helicopters and the Radio Electronic Technologies concern will cooperate in the development, construction and maintenance of helicopters. According to the leadership of both organizations, such cooperation will reduce the cost of production of avionics and improve the economic aspects of the production of helicopters. In addition, joint work will facilitate the study of the main issues of a technical and production nature.

In accordance with another contract from 27 August the Physical Institute. Lebedeva (FIAN) will receive from the British company e2v some components for creating the photo-receiving equipment of the Spectrum-UV space telescope. The e2v CCDs were chosen for their high performance. They not only have high resolution, but also differ in low noise. With the help of these matrices, the telescope can get a clear and almost devoid of any distortion of the image.

On Tuesday afternoon, one of the largest current contracts was signed under MAKS-2013. In the presence of Prime Minister D. Medvedev, representatives of the United Aircraft Building Corporation and the Ministry of Defense signed an agreement on servicing aircraft for the next three years. In accordance with the new contract, UAC will accompany equipment throughout its entire life cycle, from construction to disposal. In the next three years, under the agreement, aircraft manufacturers will perform work estimated at more than 80 billion rubles.

“Helicopters of Russia” on the first day of the exhibition sold ten helicopters of two types. In accordance with the contract signed at the salon in 2015, the Colombian airline Vertical de Aviacion will receive Russian equipment. First, Russian Helicopters will begin handing over five Mi-171А1 helicopters to the customer. A year after that, the deliveries of the same amount of new Ka-62 will start. The cost of the contract has not yet been announced.

The result of the first day of the exhibition for the Russian aviation industry were several contracts worth about 7,7 billion US dollars. This agreement with the Ministry of Defense regarding escort aircraft, contracts with credit organizations and, most importantly, orders of aircraft. Thus, the Superjet 100 and MC-21 aircraft order portfolios were replenished with a total of 73 aircraft with a total value of about five billion dollars.

Also, it should be noted, and other aspects of the statistics of the current air show. According to the law enforcement agencies, on the first day of the MAKS-2013 operation, 18 received thousands of guests. This clearly demonstrates the interest of the public and the professional community to the largest domestic air show.

Salon MAX-2013 closes 1 September. For the remaining days, it is planned to hold a lot of events, intended both for specialists and for people who are simply interested in aviation. While it is impossible to say what will be the total amount of contracts signed at the exhibition or how many people will visit the salon for all the days of its work. However, it is already clear that the current MAKS can be at least one of the largest salons in Zhukovsky for all of their history.

Ctrl Enter
Noticed oshЫbku Highlight text and press. Ctrl + Enter
We are
MAX-2013. Second dayThe first results of the exhibition IDEX-2013
14 comments
Information
Dear reader, to leave comments on the publication, you must to register.