The Americans bombed Prague, and we are offered to repent for the introduction of troops into Czechoslovakia

August 29 2013
29
Coincidentally, two friends about Czechoslovakia one after another hit the Friendlet. One tells us that we are still being offered to repent for having invaded Czechoslovakia in the 1968 year and defended our geopolitical interests (see “The role of the NATO countries in the events of Czechoslovakia 1968). in How the Amerinsians bombed Prague - Today is a rather curious, albeit tragic date: the anniversary of the "accidental" bombing of Prague, which was accomplished on February 14 1945, by the US Air Force. Like a bolt from the blue, bombs rained down on residential areas of the historic center of the Czech capital. It looked like a sudden hell, as the X-NUMX of the B-60 Flying Fortess planes flew at once, which dropped bombs on the most populous areas of the city's 17. 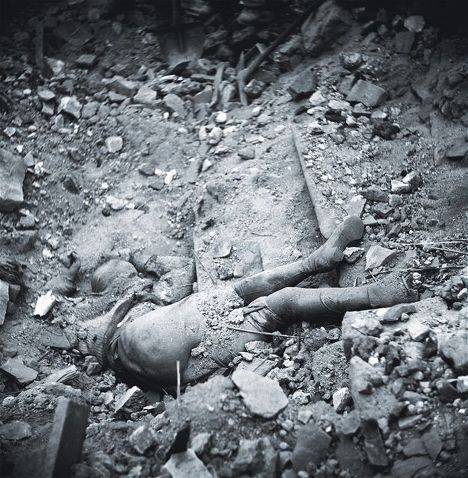 The first victims of the raids were found in the area of ​​the Benedictine Emmauz monastery; among them was this woman.

Marshall was the press photographer of the organization for the education of young people in the Czech Republic and Moravia, and therefore he had access to restricted areas. The bodies of victims of bombing for identification were collected in cold places, for example, in the church of St. Ignatius.

No one could understand - why did the Americans decide to strike at Prague? What for? What's the point of this?

However, when the first shock took place, the explanation was very obvious - the “allies” wanted to show the power of their bomber to the Soviet Union aviation, and, at the same time, inflict maximum damage to industry so that it does not go to us. No wonder then we were reproached with the fact that in the socialist bloc technological and industrial development is going worse (the “Western critics” themselves took care to complicate our lives).

The Yalta Conference, where the leaders of the victorious countries agreed on the lines of demarcation, areas of their actions: where the troops of a particular country should go, and where not, ended on February 11, and on the night from 12 to February 13, the Allies bombed Dresden to pieces, who was in our area of ​​action. The Americans destroyed three bridges across the Elbe, in order to hold back the advancement of our troops, bombed, so that we did not get, large industrial facilities in the Czech Republic, Slovakia and other regions. By the way, when in 1941 we suggested that the British and Americans bombed using the Crimean airfields, oil fields in Ploiesti (Romania), they did not do that, and in 1944, when our troops approached the main gas station in Germany, they hit it.

Later, when they demanded explanations about the destruction of Prague from the Americans, they were voiced a version that was almost mocking: they said that all sixty bombers had strayed off course, and that in fact they, at first, wanted to bomb Dresden. Prague is bombed by chance! 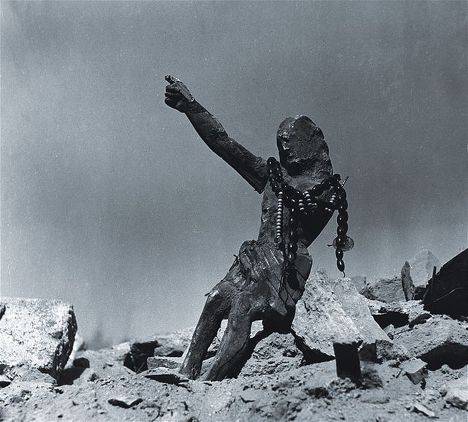 And although it was no longer necessary to bomb Dresden himself, and the other cities of East Germany, the Americans and the British did bombard, carefully ruining almost everything that could go to the Russians, that is, to serve us in restoring our own industry. There were a lot of victims of these air raids, and “by mistake” bombed camps of prisoners of war. 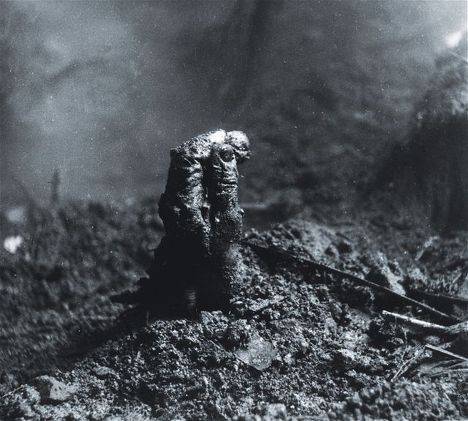 Undoubtedly, the most symbolic photograph of Marshall, taken on the 14 of February, is the hand of a buried man.

In Prague, on February 14, 1945, more than a hundred unique historical buildings, dozens of important engineering and industrial facilities, but most importantly, 701 people died and 1184 people were injured! Remember these numbers! Seven hundred people died just because "the Americans were wrong."

In the past twenty years, we all have been buzzing about the so-called “Prague Spring”, which was presented as a kind of liberation revolution, which was suppressed by the Soviet regime. In fact, it was a banal political provocation, using “orange technologies,” as they would say now. Western provocateurs banally applied all the established schemes of influence that they used in Romania, immediately after the War (but Stalin then very well put out the infection), and in Hungary in the 1956 year, and, of course, later, in our times. There were the same performances in East Germany immediately after the war, repressed by the German police, firmly and mercilessly.

But then we did not know much, and the Czechs didn’t guess much, because that provocation, in the eyes of many people, looked like something spontaneous. 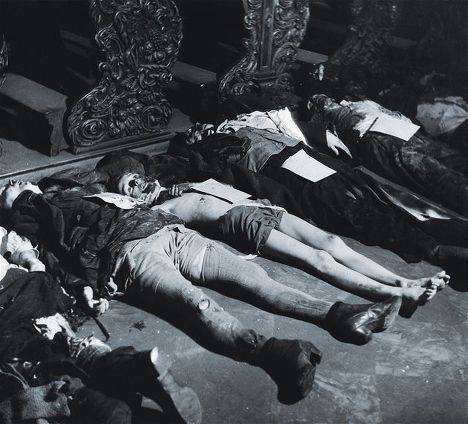 Fortunately, the Prague revolt of 1968, managed to neutralize, extinguish, in a fairly short time, and that is why we, and the whole world, had the opportunity to live and develop peacefully for another twenty years and not know everything that happened in 1991. If the Prague Spring had not been extinguished right away, then the wars in Yugoslavia, in the Caucasus, all the numerous provocations, death of people, broken fates, and the extinction of our population and industry would have started earlier. The provocation in Prague had to be repaid, returning the balance of power, in Europe, to its former place, not allowing the west to devour a piece of the territory that we had gained in the battles.

Now, attention! With the suppression of the Prague revolt of 1968, in total, there were less than a hundred victims.

And most importantly: we did not even think of bombing Prague, it was the Americans who were just bombing - both Belgrade, and Baghdad, and Prague “by chance”, and I wouldn’t say anything about what was happening in Vietnam. Only two examples:

1 - ARD units (army special forces of those years) were thrown on the airfield without cartridges. The capture was bloodless, the strips were cleared from the barricades and the boards were taken with infantry.

2 - German guard / they were also introduced to Czechoslovakia / ran along the street with chalk lines - “Passage is prohibited!”. Some teenager crosses the "border" and the sentry immediately shoots. And falls.

And compare: less than a hundred victims from the operation 1968 of the year, which solved a lot, was necessary for the Soviet people, and for the stability of the whole world! And can this be compared with the seven hundred dead from one "random raid"?

For the past twenty years, and there, much more, we were told about "evil Soviet villains" who were abusing in Prague, but did not mention in a word what was seven times more monstrous - the cynical actions of the American military, which took place in the same historical period a little earlier. Seven times more victims, ten times more wounded, and no official purpose, only secret sabotage.

View from Palmovka to the burning Vysocany. 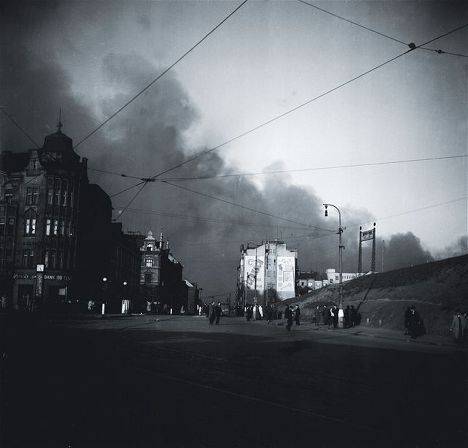 But the propaganda presented everything as if the Americans were good, and the Russians were bad, still bad, although thanks to the Russian, Czechoslovakia was recreated. That same Czechoslovakia, which the British, French, Germans, Poles and Hungarians "correctly" divided as a result of the Munich agreement 1938 year.

After the first raid, the Marshal took the 162 image, after the second - 74. Almost all the photos were signed, which allowed us to determine exactly which places are shown in the pictures. Corner of Sokolovskaya and Valdetskaya streets. 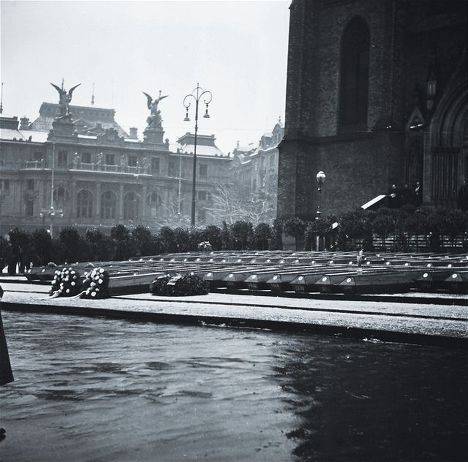 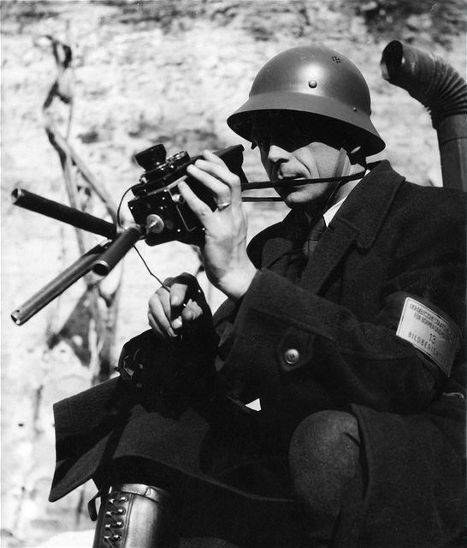 Photographer Stanislav Marshall in the area of ​​the Emmauz monastery, 14 - February 1945; on the armband there is an inscription: “Der deutsche Staatsminister für Böhmen und Mähren - Bildberichter” (German Minister of State for the Czech Republic and Moravia - journalist).

Ctrl Enter
Noticed oshЫbku Highlight text and press. Ctrl + Enter
We are
A great interview with Sergey Lavrov: about Ukraine, Obama and IranWhat you didn't want to know about England
Military Reviewin Yandex News
Military Reviewin Google News
29 comments
Information
Dear reader, to leave comments on the publication, you must to register.