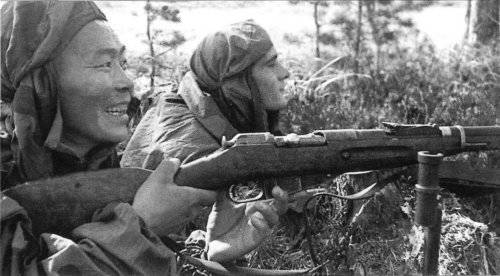 Hereditary hunter Semyon Nomokonov, a Tungus from the Hamnegan family, first took up a gun at the age of seven. Three years later, he was considered a real hunter - sable beat, minted red deer and upland, hunted down the bear. When the Great Patriotic War struck, he was already over forty.

Transbaikalian hunters have a custom: to designate each killed animal with a mark on a gun. A wolf, hitting a flock of sheep, will be cut until it is disturbed. The fascists are the same wolves: they burn, they kill, they rob. They Semen Nomokonov declared "Dine-Tuluguy" - merciless war.

Fighting path Nomokonov began to orderly. Accidentally, a three-line came into his hands, from which he opened his sniper account. It was in the October days of 1941 of the year - having received a rifle, Semyon Nomokonov decided to shoot her. In order not to waste his ammunition, he checked the rifle on the Nazis, who, stooping, walked along the wooded shore of the lake. The shot was accurate.
The number of destroyed Nazis grew every day. To Nomokonovu began to send for training other shooters. He willingly passed on his experience, small and big sniper cunning.
By the end of the first year of the war, the sniper had over one hundred marks. Perhaps the most important of them is a fascist general. 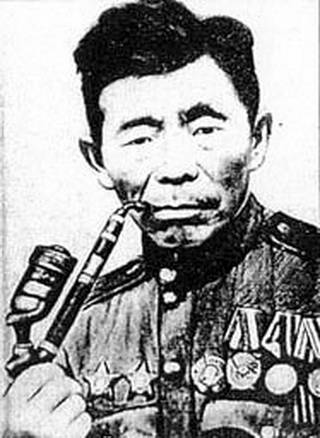 ... Our troops held defenses at Valdai Heights. One night, Nomokonov, together with his partner and countryman from the Aginsky Buryat Autonomous Region, Togon Sanzhiev, went on a “hunt”, skillfully disguised themselves and began to wait patiently. By the middle of the day the sun shone gently. The enemy trench was in full view. There Nomokonov and noticed a group of officers. They were preoccupied with something and seemed to be waiting for someone. The sniper carefully aimed, but the feeling of the hunter prompted him to postpone the shot. Must see, a large beast to come, thought Semen. So it turned out. A short, dense Hitlerite in a coat with a fur collar appeared surrounded by the retinue, it is important to step in front of everyone. He was caught by a sniper.
From the testimony of the prisoners, it was subsequently possible to establish that the sniper's shot was on the spot knocked down by a fascist general, who had arrived from Hitler's headquarters to inspect the advance units.

A fascist sniper, a wolf wolf, appeared on one of the front sections. For three days, without closing my eyes, Semyon Danilovich hunted down the enemy. He suspected that the fascist sniper was sitting in the attic of a house standing on the edge of the village. But how to outwit him? Nomokonov set a trap: he mounted a rifle on the trench tower, stretched a rope to the trigger and hid behind the stones. He waited for the right moment and pulled the rope. The fascist could not stand it and hit the empty trench, finding his rookery in the attic. The evening sunset sun illuminated the roof of the house from behind, and Nomokonov saw that there was not enough of a slat in the attic of the attic. I repeated the trick with the rope again - an optical sight flashed in the attic gap: that was enough for Semyon Nomokonov to win the duel, and the fascist sniper with the kula fell down. 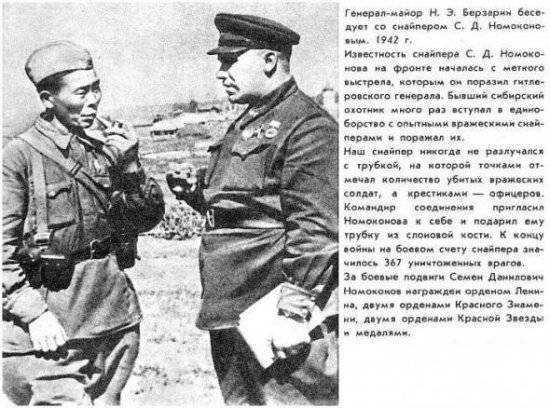 In total, during the years of the Great Patriotic War, the sniper Semyon Nomokonov destroyed the 360 of the Nazis, adding to them 8 samurai, already smashing the Japanese as part of the forces of the Trans-Baikal Front. For courage and heroism, the brave soldier was awarded the Orders of Lenin, the Red Banner and the Red Star, medals. In battles he was wounded eight times and contused twice.