The first information about the combat module "Epoch" 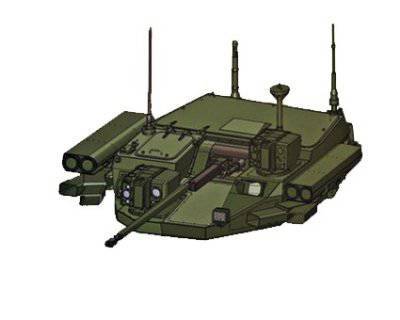 During the recent exhibition “Innovation Day of the Ministry of Defense”, a part of the new developments was presented only in the closed part of the exposition. As you know, all the secret becomes clear and several days after the exhibition, some information about the stands and samples closed to the public has appeared in the public domain. For example, the other day the public saw one of the posters on display at the Innovation Day. The photo was authored by V. Kuzmina, being published by armored machinery specialist A. Khlopotov, instantly scattered across the Internet’s core resources.


A single photo captures a poster describing a kind of “universal combat module” developed by the Tula Instrument Engineering Bureau (KBP). Unfortunately, the name of the project on the poster is missing. However, this did not prevent A. Khlopotov from expressing his assumptions on this subject. According to the expert, the poster describes the combat module "Epoch". This assumption is supported by the fact that the PCU has not yet been engaged in other projects of such purpose. Thus, there is every reason, at least until more complete information is available, to consider the development presented at the "Innovation Day" as a combat module "Epoch".

In addition to the description of the promising combat module, the poster has its image, as well as drawings with combat vehicles based on the developed armored platforms equipped with the Epoch. From the graphic part of the poster we can conclude that it is possible to install a new combat module on the chassis “Boomerang”, “Kurganets-25” and “Armata”. As far as this is true, it is not yet completely clear due to the lack of open information on the progress of relevant projects. Nevertheless, equipping several promising combat vehicles with a single combat module looks interesting and promising.

The combat module "Epoch" has a weapon system consisting of barreled and rocket systems. On the tower of a relatively small height, an automatic gun of the 30 caliber of millimeters of the 2А42 model, a PCN 7,62-mm machine gun and two launchers with four Kornet missiles are installed. As can be seen from the composition of the weapons, the new combat module continues and develops the ideology embodied in the previous draft of the KBP called “Berezhok”. At the same time, the new Epoch module, in contrast to Berezhka, is not equipped with an automatic grenade launcher. Probably, the authors of the project considered that the removal of a grenade launcher from the weapons would not have a serious impact on the general characteristics of the combat module.

The poster displayed indicated the amount of ammunition transported and ready for use. Thus, it is proposed to place 500 projectiles for an automatic cannon (160 armor-piercing sub-caliber and 340 high-explosive fragmentation) and 2000 cartridges for machine guns in the combat compartments of the Epoch module. All ammunition rocket complex of four ammunition will be immediately mounted on launchers. 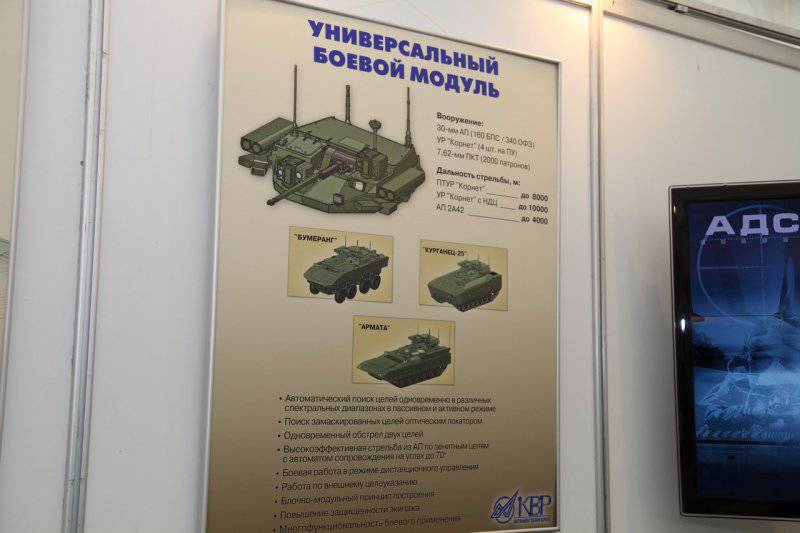 The firing range of various weapons of the Epoch module is defined as follows. Effective destruction of targets from an automatic cannon is ensured at a distance of up to 4000 meters. Missiles "Cornet" can destroy targets at twice the distance. When using guided missiles of this model with a non-contact target sensor (NDC), shooting at a distance of up to 10 kilometers is possible.

On the upper surface of the tower of the combat module there are two units with sighting equipment. Specific types of equipment proposed for use, for obvious reasons, have not yet been announced. However, on the poster there is some information about them. According to the advertising material, the complex of electronic equipment of the Epoch module is able to automatically search for targets in several ranges of the optical spectrum in a passive and active mode. This means that the sighting equipment has both optical and thermal imaging channels. In addition, it is argued that both channels can be used simultaneously, and the simultaneous firing of two targets is possible. Among other features of the fire control system of the Epoch module there is a search for targets using an optical locator; automatic target tracking, capable of firing at anti-aircraft targets when raising the gun to 70 °; as well as the ability to work with external targeting.

Following the trends of recent times, the designers of KBP performed a promising combat module on a block-modular principle. This means that, if necessary, combat vehicles armed with the Epoch can be upgraded and improved without any difficulty by installing new weapons or instruments.

Separately, it is worthwhile to dwell on the declared increased level of crew protection. The vertical dimensions of the tower module "Epoch" are relatively small, from which it is possible to draw conclusions about the displacement of crew jobs as low as possible, below the roof of the body of the combat vehicle. If this assumption is true, then an explanation appears for the characteristic shape of the aft part of the tower. Probably, it provides for the storage of ammunition or, at least, parts of it. In this case, the ammunition supply mechanisms are located in the maximum proximity to the breech of the automatic cannon, which also confirms this version.

Carrying ammunition outside the armored vehicle hull abroad has long been considered the layout standard for various combat vehicles, but in our country it remains only at the project stage. Until now, numerous debates about the correctness and usefulness of one or another variant of the placement of ammunition do not abate. Thus, the placement of projectiles for a cannon and, possibly, ammunition for a machine gun outside the main habitable volume — regardless of the real prospects for such a decision — can be a cause for violent disputes.

In general, at the moment the appearance of the combat module "Epoch" can really be a subject of controversy due to the use of several ambiguous technical solutions. This and the possible placement of ammunition in the rear of the turret, and the specific location of sighting devices. On the existing image, blocks with equipment of sights are placed in such a way that none of them can rotate full 360 degrees and be used for a complete overview of the terrain.

Another cause for criticism of the project in its current form could be the 2А42 automatic gun. So, A. Khlopotov notes that this gun has an unfortunate stem, leading to unacceptably high dispersion at large distances. In this regard, the characteristics of the fire 30-mm guns will be insufficient to perform real tasks. As for a certain casing that closes the barrel of an instrument in the figure, Khlopotov considers it an unnecessary excess, the purpose of which is only to improve the appearance of the combat module or to follow a foreign "fashion".

As far as we know, the new combat module "Epoch" of the Tula development still exists only in the form of a project. Any information about the construction of the first prototype is not currently available. In this regard, it can be assumed that the design described on the poster is one of the variants of a promising combat module, while far from being embodied in metal. Thus, all the existing design flaws can be corrected even before the assembly and testing of an experienced combat module begins. Unfortunately, at the moment, based on the scarce information available, the promising "Epoch" module raises many questions, some of which relate to the most important features of a modern combat vehicle. It remains to hope that the poster actually depicted a combat module, far from mass production and combat use.