Russia ranks first in terms of the number of fighters set for export in 2009-2012. 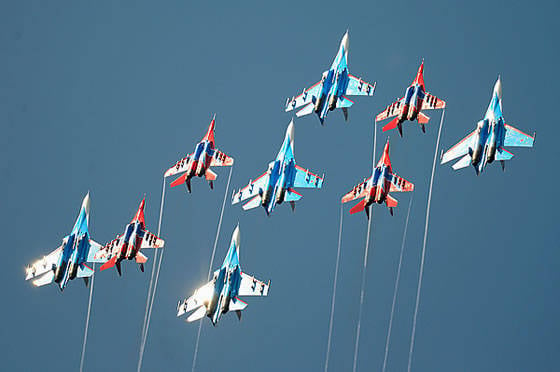 The 11 International Aviation and Space Salon MAKS-2013 begins its work in Zhukovsky. 850 companies take part in the exhibition: 576 Russian and 274 foreign from 42 countries.


At the invitation of the Federal Service for Military-Technical Cooperation of Russia, official delegations from 2013 foreign states are expected to arrive at MAKS-79.

At the MAKS-2013 showroom, Rosoboronexport plans to hold talks with more than 60 delegations from 40 countries.

According to the press service of the Russian special exporter, today at aviation 58% of the total order portfolio of Rosoboronexport accounts for air defense equipment and means.

According to TSAMTO, Russia confidently ranks first in terms of the number of new multi-purpose fighters put on export in the 2009-2012. and has good chances to maintain its leadership in the expected supply in the short term (2013-2016).

Over the 8-year period (2009-2016), the number of delivered and planned to supply new Russian multi-role fighters, according to TSAMTO, is 372 machines worth about 17,1 billion dollars (including the delivery of new fighters and licensed programs).

Russia is the leader in this segment of the market in terms of quantity in both 4-year periods (and for the second period it is conditional, since a number of expected contracts for delivery in the billing period has not yet been concluded). In terms of value, Russia ranks second after the US in the 2009-2012 period, in 2013-2016. and in general for the period 2009-2016.

In the category of “tenders”, which are not yet completed, in 2015-2016. delivery is planned (in case of compliance with the schedule of summing up, determining the winners and implementing the initial deliveries) 53 fighters for an estimated amount of 4,87 billion dollars.

The presented forecast of TSAMTO is certainly indicative, since all the leading suppliers, including Russia, may postpone deliveries (relative to the announced schedules) for already concluded contracts, especially at the current moment the approximate delivery times for declared intentions can be considered as purely estimated. or still unfinished tenders (this applies to all countries supplying).

In particular, the forecast for Russia for the period 2013-2016. Included are the expected initial shipments under a potential contract with China on the 24 Su-35, as well as the delivery of the next batch of 12 Su-30МК2 under the new contract with Vietnam (expected delivery time is 2014-2015). A possible deal with Venezuela for the supply of 24 Su-30 (Su-35) is not included in the calculation of future purchases for the near future (the program with Caracas at the official level has been discussed for a long time, there is no visible progress, Caracas is unlikely to receive).

In addition, the contract for the supply of 24 fighters MiG-29М / М2 to Syria is included in the offset of the planned deliveries of Russia (the situation both in the SAR itself and around it is extremely tense, which may affect the implementation of this contract). The calculation takes into account the planned delivery of Serbian 6 fighters MiG-29М2 (the contract has not yet been concluded, the question of allocating a Russian loan to Belgrade is being decided).

That is, Russia still has a lot of work to do to actually confirm its leadership in the upcoming 4 of the year.

Ctrl Enter
Noticed oshЫbku Highlight text and press. Ctrl + Enter
We are
Russia firmly occupies a place in the global arms market 2 and will maintain its position in the foreseeable future.In St. Petersburg opened a naval salon
Military Reviewin Yandex News
Military Reviewin Google News
52 comments
Information
Dear reader, to leave comments on the publication, you must sign in.