In place of the "Union". Creating a new Russian manned spacecraft is the task of the current decade.

August 30 2013
42
The SP Korolev Rocket and Space Corporation Energia from the first launch into space of 12 on April 1961 of the manned spacecraft Vostok with Yuri Gagarin on board is carrying out work on the development of this area of ​​practical cosmonautics, the founder of which is rightfully the space technology Sergey Korolev. The corporation has a wealth of experience in this field. For more than half a century, it has been the leading organization in the domestic rocket and space industry for the creation of manned spacecraft, manned orbital stations and complexes. From 2008, according to the Roskosmos specification, the company is developing a manned transport vehicle of a new generation.


The project of a new Russian manned transport ship being created by RSC Energia named after S. P. Korolev in cooperation of enterprises of the industry, in a relatively short time passed several stages of work, during which the customer specified the ship’s tasks and requirements for it. To date, a technical project has been released. By the decision of the Scientific and Technical Council of Roscosmos, it was adopted with a recommendation to proceed to the release of design documentation and experimental testing to ensure the first test unmanned flight in low-earth orbit in 2018.

At this stage of the ship’s creation, its main task is to fly to the Moon and back, as well as to fly in low-Earth orbits (transport and technical support of the manned station and, if necessary, special autonomous flights). 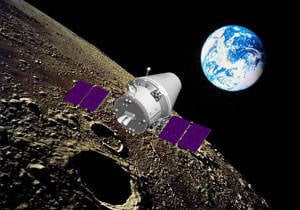 When flying to the moon, two programs are considered.

One of them is a two-starter with an expedition landing of four people on its surface. According to this program, a landing ship without astronauts is first sent to a low circumlunar orbit, and then a manned transport worker takes the crew to him, who goes aboard this ship, landing on the lunar surface and then returning to a manned transport worker, on board which astronauts return to Earth

Another program provides for the docking of a transport manned spacecraft with a near-moon orbital station. Of particular interest is the location of such a station at a distance of about 60 thousand kilometers from the moon - at the point L1 or L2 Lagrange of the Earth-Moon gravitational system. These points are on a straight line connecting the centers of our planet and its natural satellite (the first is in front of the Moon relative to the earth observer, the second is behind it).

The ship consists of a returnable reusable vehicle and a disposable engine compartment. The length is about six meters, the lateral size of the deployed solar panels is about 14 meters, the starting mass for flights to the Moon is about 20 tons, and for flights to the station in low near-earth orbit it is about 14 tons. Crew - four people. The removal of the ship is expected from the Russian Vostochny cosmodrome. Landing of the return vehicle must be carried out on the territory of Russia.

A full-scale design layout of the return vehicle of the new transport manned vehicle can be seen at the RSC Energia stand as part of the combined exposition of the rocket and space industry of Russia deployed in the D1 pavilion at MAKS-2013. The length (height) of the returned apparatus is about four meters (without taking into account the disclosed landing supports), the maximum diameter is about 4,5 meters.

The composition of the return device: command, aggregate and unsealed upper compartments, the side surfaces of which are equipped with heat protection, and a frontal heat shield.

The crew compartment houses the crew, the complex of means for its life support system, part of the equipment and instruments of the onboard control complex, the container of the parachute system. The aggregate compartment will contain jet engines for controlling the descent of the returned vehicle in the atmosphere, fuel tanks and a pneumohydraulic system for supplying fuel to these engines, as well as a solid propellant landing propulsion unit, four retractable seating supports, instruments and equipment of some onboard systems of the apparatus. 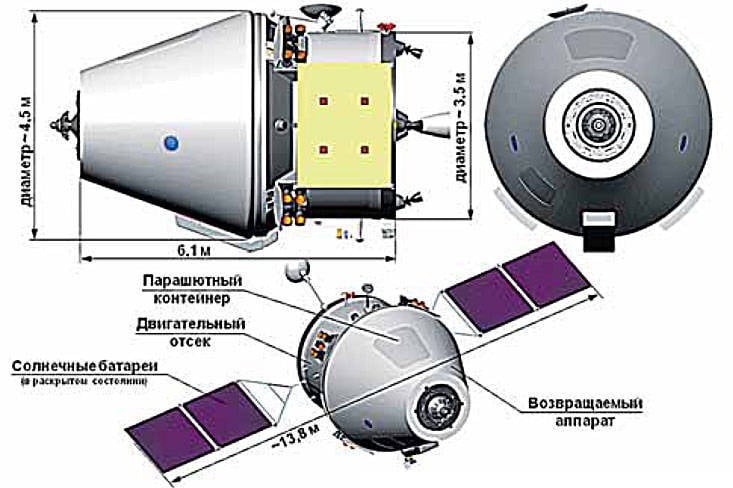 For the flight of the ship to the Moon, special navigation devices are installed on it, a propulsion system with two cruise engines of two tons each and fuel to carry out dynamic operations in near-moon orbit and the formation of the trajectory of return to Earth. The onboard radio-technical systems of the ship must maintain its communication with the control center and the external trajectory control of the flight by ground measuring points up to a range of 500 thousands of kilometers.

The new ship will be much more comfortable than the "Union". The free volume of the return apparatus per one cosmonaut will almost double. Developed design solutions for the layout of the interior should ensure the ergonomics and comfort of the crew, improve the competitiveness of the ship compared to similar developments. In particular, new seat “Cheget” with improved comfort will be used to accommodate astronauts, new technical and software solutions will be implemented in the part of on-board computer control system and flight information display for the crew.

The design of the ship uses a lot of innovation. Among them are new high-strength aluminum alloys, heat-shielding materials with a density three times smaller than those used on Soyuz TMA, carbon-fiber materials and three-layer structures, laser means of docking and mooring, and more. The multiple use of the return vehicle of the new ship is provided by a complex of implemented technical solutions, including due to the vertical landing on the landing pillars, as well as the replacement of thermal protection during inter-flight maintenance.

For flights of the ship to the satellite of the Earth it is planned to use a rocket carrier of the super heavy class and an upper stage intended for putting the ship on the flight path to the Moon and braking it. Their development is scheduled to begin soon. The loading capacity of the launch vehicle, according to preliminary estimates, should be at least 65 – 70 tons, which include the starting weight of the ship and the starting weight of the upper stage (40 – 45 tons).

It is assumed that five return vehicles will be built, taking into account their multiple use and the intended flight program. The engine compartment of the ship will be made for each flight separately.

Ctrl Enter
Noticed oshЫbku Highlight text and press. Ctrl + Enter
We are
"Roskosmos" demonstrated at MAKS-2015 elements of a manned transport ship of a new generationCosmonautics has a limitless future, and its prospects are endless, like the Universe itself (S. P. Korolev)
42 comments
Information
Dear reader, to leave comments on the publication, you must to register.