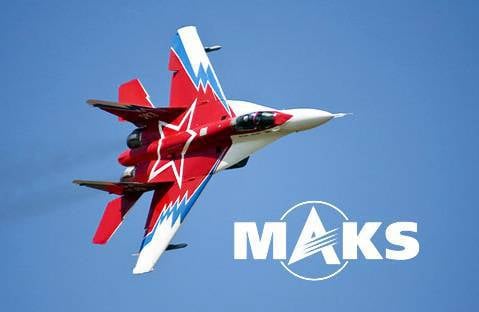 In the past two years after MAKS-2011, the domestic aviation industry finally reoriented from the production of mainly export products to mass production of military, training and military transport aircraft in the interests of the Russian air force by modern standards. At the same time, the situation in the commercial aviation segment remains more than complicated. Against the background of the difficult and problematic development of the SSJ-100 project, the domestic market of Russia in the segments of medium- and long-haul aircraft was finally captured by foreign manufacturers.

Large-scale purchases of new equipment for the Russian Air Force began immediately after the August war with Georgia: already in December 2008, an unprecedented order for 32 front-line bomber Su-34 was placed at that time. During the MAKS-2009 air show, a new major contract was signed for the acquisition of 64 fighters in total, including the 48 of the promising multi-purpose Su-35С, 12 Su-27СМ3 and 4 Su-30М2. In addition, the Russian Air Force bought 34 fighter MiG-29CMT / UBT, from which Algeria refused.

However, the real revolution took place in 2012, when one after another several large contracts for combat, training and military transport aircraft were signed. In total, the Russian Air Force purchased another 92 Su-34 front-line bomber, two batches of X-NUMX units of Su-30CM multipurpose fighter planes, which are a Russified version of the Su-30MKI-30 Su-16МXNNXX and X-NNXX-30 and 2 Su-39MXNNXX and X-NNXX-76-90I-24KI-29S-231MX-NNXX and 192 X-NUMXKI-39S-2011MXI-55S-10 In addition, the Navy signed a contract with RSK MiG for the purchase of 130 deck fighters MiG-XNUMXK. During one year alone, the United Aviation Corporation received orders for an XNUMX aircraft, including XNUMX combat and XNUMX military vehicles. Earlier, in December XNUMX, XNUMX training Yak-XNUMX were also ordered.

Thus, if before MAKS-2009, an internal order made 32 machines, and between MAKS-2009 and MAKS-2011 - 98 aircraft, then since the last salon the Russian Air Force and Navy purchased 286 aircraft, including 192 combat, 55 training aircraft and 39 military transport. In the near future, perhaps already at the MAKS-2013 air show, an important contract for the purchase of 24 MiG-35C fighters will be signed. If this happens, the program, frozen after the Russian car dropped out of the MMRCA Indian tender, will receive a new impetus for development.

The contracting of military aircraft of new production for export in the 2011 – 2013 years, by contrast, has decreased compared to the previous biennium. In 2009-2010 respectively were obtained supply contracts 42 fighter Su-30 (20 Su-30MK2 Vietnam, 16 Su-30 MKI (A) Algeria, 6 Su-30MK2 Uganda) and 44 fighters MiG-29 ( 24 MiG-29K to India and 20 MiG-29 various modifications to Myanmar). That is, it was all contracted 86 combat aircraft. In the period of 2011 – 2012, contracts were signed for the supply of 6 Su-30MK2 to Indonesia and 42 technological sets of large-assembly Su-30MKI assembly to India, that is, total 48 combat aircraft. Statistics on the contracting Yak-130 blurred due to regime change in Libya and because of the Salafi foreign military intervention, supported by the United States and European neo-colonialists in Syria. The Libyan Jamahiriya ordered 2010 Yak-6 in 130, but after the new regime was established in the country, the contract, of course, remained unfulfilled. Syria entered into a contract at the very end of 2011 for the purchase of 36 of such planes and translated the advances provided for in the agreement in a disciplined manner. However, the status of this contract remains unknown, since Russia can freeze the fulfillment of its obligations until the end of the so-called “civil war” in this country.

In general, Russian export commitments as of mid-July included the delivery of 50 military aircraft and 42 technology kits, as well as more 740 aircraft engines worth more than 6 billion dollars. This is almost one and a half times less than the portfolio of orders for air defense weapons and is almost equal to the cost of contracts for helicopter equipment. The reason for the drop in the export of aircraft is obvious: the Indian and Chinese markets are saturated with heavy combat aircraft complexes.

The main hopes for overcoming the downward trend in contracting combat aircraft are associated primarily with the promotion of the newest multi-role fighter Su-35 to the market. As of today, Russia has concluded an intergovernmental agreement with the People's Republic of China on the delivery of such machines to 24 in this country, the signing of the contract is expected at the end of the current - early next year. Based on the precedent of the implementation of the Su-27SK program in 90-s and Su-30MCC / MK2 in the zero years, it is possible to hope that this party will not be the only one in Chinese procurement, and in the most optimistic version, the license for this country will also be sold Su-35 production. The natural markets for this complex are also Vietnam and Indonesia.

The Russian domestic market was practically under the complete control of foreign aircraft manufacturers. This was the result of the removal of prohibitive duties on the import of foreign aircraft on the eve of entry into the WTO. The production of IL-96 and TU-204 / 214 is supported solely by ordering in the interests of state needs, that is, for the presidential special squad and the military.

At the same time, the production of the regional SSJ-100 aircraft, despite the 9 disaster of May 2012 of the year, is slowly but growing, having reached 12 units last year. The first export deliveries began - to Mexico and Southeast Asia. This year it is planned to release already before the 20 "Superjet". Nevertheless, the program continues to face technical and organizational difficulties, and most importantly, it remains financially unprofitable. It is obvious that in order to increase the commercial attractiveness of the project, it still needs state or quasi-state support and, most importantly, output to the production of tens (at least 50 units) of machines per year.

It is a breakthrough in the commercial aviation segment that becomes the main task of the aviation industry in Russia. The capacity of this market is ten times higher than the production of military aircraft. Major technological innovations are also generated not in the military, but in the civilian sector of the aviation industry. So in the long term, no domestic purchases of combat aircraft will be able to ensure our country maintains a leading position in this most important sector of the world and national economies.

Ctrl Enter
Noticed oshЫbku Highlight text and press. Ctrl + Enter
We are
List of destroyed the largest and most high-tech enterprisesDomestic aviation industry comes to an end?
Military Reviewin Yandex News
Military Reviewin Google News
26 comments
Information
Dear reader, to leave comments on the publication, you must sign in.