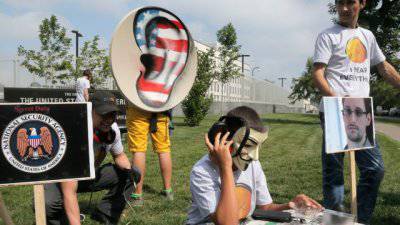 Received a new batch of exposures from Comrade Snowden. From now on, after the Guardian newspaper was pinched by the native British government, publications, materials for which Snowden was handed over to Glenn Greenwald, went through various media outlets, including those overseas. Britain is still involved in informing the public, but with a lot of precautions and reservations. In the future, we should wait for publications in the New York Times - unless, of course, US Attorney General Eric Holder keeps his word, and the American branches of government, one after another, do not attack journalists.


The first exposure It turned out information about some secret base in the Middle East.

According to information from Comrade Snowden, British intelligence agencies have created a secret base in the Middle East that intercepts e-mail, network traffic, and information about regional telephone conversations. He writes about it "Lenta.ru" with reference to The Independent.

Authorities obtain information by connecting to fiber optic cables. The collected data on Middle East users is sent to the UK Government Communications Center, which, of course, shares information with the NSA.

"The Independent" refused to tell in detail about this database. The publication recalled that the detailed publication of information from Snowden led to a conflict between the British authorities and The Guardian.

In the Guardian they just explained the new editorial policy that is now being applied to information previously received from Edward Snowden. At the same time, the editors reported with sadness what the infringement of the freedom of speech leads to.

Editorial article in The Guardian (translation source - "InoSMI") is devoted among other things to the fact that the nature of espionage has changed in our time. “What was previously an exception has now become almost universal. The obvious goal was to take entire nations under surveillance. ”

“Have governments ever thought about such a concept as consent?” Didn't it occur to engineers, heads of intelligence, ministers, congressmen and presidents that such serious changes in the contract between the state and the citizens require some discussion? ”

Now, thanks to Snowden, the discussion has begun. A side effect also arose - the Guardian had problems with the home government. Assuming that freedom of speech is a very vague concept, as well as a relative concept, the editors of the newspaper took some precautions in advance and passed on some materials ... to colleagues from news agencies in America, where there are more powerful mechanisms to protect serious journalism. "

From now on, the sequels from Snowden will be transferred from New York. Part of the material transferred to the New York Times. Journalists are counting on the fact that the US Attorney General will fulfill his promise. He recently assured the public that he would not hold journalists accountable for the fact that "they are doing their job."

Government officials, the Guardian believes, should not define the boundaries of public discussions and limit the discussion with the help of the law, that is, “trying to criminalize the act of journalism itself - without which no discussion can begin”. As for citizens, they “have the right to protect the integrity of their personal life from the state. The state is obliged not only to ensure security, but also to protect freedom of speech. ”

By the way, the Ministry of Foreign Affairs of the Russian Federation criticized the actions of the British government, which demanded that The Guardian destroy physical media containing copies of documents provided by Snowden. The statement of the official representative of the Ministry of Foreign Affairs was published on the website of the department, writes "Lenta.ru".

The Foreign Ministry spokesman said that the actions of the British side run counter to its declared principles of adherence to universal standards in the field of human rights and media freedom.

We return to the disclosures.

The second exposure. No matter how they rejected or denied widespread cooperation with the security services, network giants or US telephone companies, some of them had to admit the other day that they even received money for their “services” to the state.

The latest data of Snowden, published in the media, showed: “Facebook”, “Microsoft”, “Google”, “Yahoo” - they all receive millions of dollars from the NSA for spying on their users. At the same time, the principle of NSA surveillance is partly recognized as illegal.

As the correspondent says. "RT" Marina Portnaya, according to a court decision declassified by the Obama administration, the NSA could not separate US domestic traffic from foreign traffic. The Agency has now begun work on a solution to a process deemed illegal.

Facebook, Microsoft, Google and Yahoo are supposed to incur certain costs in connection with requests for access. The whole process cost the PRISM participants millions of dollars. These costs of companies were paid by the Department for the work with special sources of the NSA. Simply put, taxpayers' money was spent to cover the costs of companies spying on these same taxpayers.

As pointed out by “The Guardian”, E. Snowden described the aforementioned division as “the most important section of the NSA”.

A Yahoo representative has already admitted that the company requested reimbursement of expenses "in accordance with the law." Facebook stated that they had never received financial compensation from the government for facilitating data provision. As for Google, the giant did not answer the newspaper’s questions. "Microsoft" refused to give an answer under the record.

The third revelation. Other information about the US surveillance program from Snowden is published in the German magazine Spiegel. The NSA collected intelligence from EU offices and even had access to UN videoconferences. And at the top of the list of priority targets for espionage, Russia and China were, of course, spelled out. This is reported by the channel "RT".

The German edition has published a table in which the objectives of the observation of the United States. The most important: Russia, China, Iran and the DPRK.

The next target priority of the NSA is recognized by the United Nations. Information about the foreign policy of an international organization Agency staff received, working under cover. This seemed to them a little, and they penetrated into the internal network of the organization. One of the documents explicitly states: “The data stream gives us access to UN internal videoconferences, hurray.”

Another goal exposed by Snowden is the EU mission to the UN in New York and Washington. Through the "bugs" in the building of the organization, the NSA gained access to digital media.

Vladimir Azin (Utro.ru) with reference to the same "Spiegel" notes that the penetration into the UN internal videoconference system was carried out in the summer of 2012. NSA employees hacked the code, after which they were able to intercept all traffic at the headquarters of the world organization. It is curious that the Aerosparians found out that the Chinese intelligence is also watching the UN diplomats at the same time.

As for the office of the EU mission, the NSA staff there not only copied data from hard drives, but also infiltrated the representation network into the computer network, taking advantage of the fact that the embassy computers worked using VPN (virtual private network).

The fourth revelation. Representatives of the NSA monitored their wives, using the code word “Love-int,” for “piquant materials,” "RT" with reference to the Associated Press.

Spying on spouses began when they left the United States. For the year of such cases of violation of privacy accumulated more than 3 thousands.

The head of the National Security Agency, John Delong, didn’t find anything better than to say that listening to most private calls was happening "by mistake." True, according to him, there were also violations that were made intentionally.

Returning to the Guardian, we note that this newspaper, despite pressure from the security services and D. Cameron’s personal instructions about the destruction of hard drives in the editorial office, will continue to publish materials from Snowden - but only a few.

"New York Times", in turn, will publish those materials that relate to the activities of the special services of Britain.

"In an atmosphere of strong pressure from the UK government, we decided to connect our American partner to work with documents relating to the British Government Communications Center (GCHQ)," the Guardian statement said.

It’s not very hard to believe that Mr. Obama - no matter what he says about freedom of speech and media freedom - as well as his Attorney General will allow numerous publications of disclosures received from the person whom the American justice system is prepared to imprison for life without the right pardon

Observed and commented on Oleg Chuvakin
- especially for topwar.ru
Ctrl Enter
Noticed oshЫbku Highlight text and press. Ctrl + Enter
We are
Geopolitical mosaic: the United States and Britain make a list of targets in Syria, and Gorbachev’s granddaughter thinks that Europeans look at Russia through rose-colored glassesEdward Snowden vs Big Brother
32 comments
Information
Dear reader, to leave comments on the publication, you must to register.