Military operation in Syria may begin in the coming days 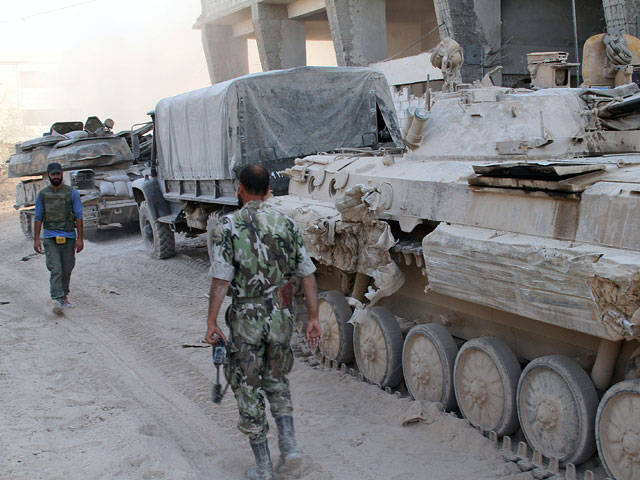 The US authorities promise in the coming days to publish a report on the use of chemical in Syria weapons. The corresponding order was signed by the head of the White House, Barack Obama. In Washington, there is almost no doubt that the toxic substances were used by the Bashar al-Assad regime. To find out whether it is so or not, a special UN commission is trying, which is now working in the Arab Republic. And the world media, meanwhile, is confident: the United States and European allies are ready at any moment to launch a military operation in Syria.


Will the Western countries begin a military operation in Syria, and if so, when? Worldwide, analysts are trying to answer this question, and are eagerly awaiting the results of the investigation of the UN commission. Experts should find out whether chemical weapons were used in the Arab Republic. Experts arrived in the 26 region of August and almost immediately came under fire.

“I was informed that a sniper had fired at the commission’s column. Despite this, our team returned to Damascus and continued its work. The experts visited two hospitals, talked to the victims, witnesses and doctors, and also took some samples. - said UN Secretary-General Ban Ki-moon.

Without waiting for the outcome of the investigation, Washington in absentia accused Bashar al-Assad of using prohibited weapons. The White House allegedly has irrefutable evidence. True, what exactly, do not say.

A little to defuse the situation tried US Secretary of Defense Chuck Hagel. During a visit to Indonesia, he said that America was not going to start a new war.

“Until we collect all the facts, and we will not be absolutely sure what exactly is happening in Syria, I will not be able to talk about the further actions of the United States and their consequences,” he said.

If the international military campaign against Syria does begin, the European allies will support the United States. First of all, the UK and France will go for it. Germany also promises not to stand aside.

"The use of chemical weapons is a crime against humanity. If reports of poisoning by the Bashar al-Assad regime are proven, the international community must take action. And Germany will not stand aside," said Guido Westerwelle, the German foreign minister.

“I think we are already seeing the dire consequences of previous interventions in conflicts in this region. Look at what is happening in Libya. The central government, with which we maintain a dialogue, does not control the vast territories of our country. Arms went to Mali, where they were repulsed, but they are also feared in other countries, particularly in Niger and Chad. Look at Iraq, where dozens of people die every day and hundreds are injured in bloody terrorist acts. " - urged the head of the Russian Foreign Ministry.

The newspaper The Guardian, meanwhile, believes that the operation in Syria may begin in the coming days. According to the newspaper, London has already transferred additional military aircraft to its air base in Cyprus. It is located just 160 kilometers off the coast of Syria. The air base in Akrotiri is expected to become the main transport hub of the military campaign. In this capacity, she has already acted during the international operation in Libya in 2011.

And the publication of The Washington Post conducted a survey among readers: is it worth Western countries to intervene in the Syrian conflict? Nearly two thirds of readers are opposed. In the comments to the article, users are reminded of the events in Afghanistan, Iraq and Libya. People believe that the United States is now more than ever close to unleashing another senseless bloody war.

Ctrl Enter
Noticed oshЫbku Highlight text and press. Ctrl + Enter
We are
The action “Military service under the contract is your choice!” In Rostov-on-Don: future contract servicemen, exhibitions and “Russian Knights”
Military Reviewin Yandex News
Military Reviewin Google News
680 comments
Information
Dear reader, to leave comments on the publication, you must sign in.