Gunners eliminated a fire on a gas well with an aimed shot. 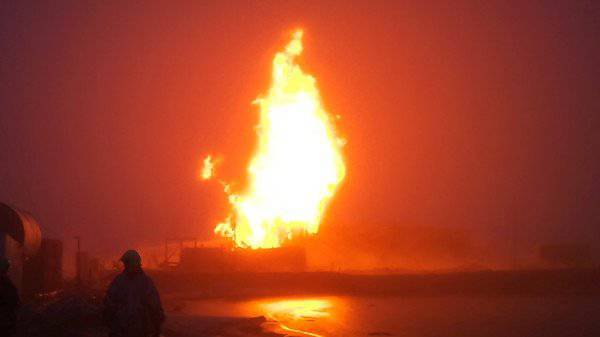 “After an unsuccessful attempt to cut off a faulty flange with a directed laser beam, the management of the gas producing company, together with the local Gazprom Gas Safety Division, turned to the command of the Central Military District for help,” the press service of the Central Military District said, ITAR-TASS reports.
Representatives of the press service reported that the fire started on August 19 at the Arcticgas facility.

"All this time, attempts to eliminate the open gas condensate fountain remained unsuccessful - a malfunction in the fittings led to a chaotic ejection of the flame through the technological holes, which made the work of rescuers and engineers impossible," stressed in the Central Military District.

According to the press service, the heat affected zone was expanding, the category of fire threatened to become more complicated.

The artillery crew, which was supposed to cope with the fire, was transferred to Novy Urengoy by a military transport aircraft aviation.

"The gun was installed at direct aiming with the minimum allowable distance in 70 m. The target diameter is 20, see. The flame prevented aiming, a miss on 10 cm was fraught with well destruction and 350-million losses," the press service added.

The UBC-8 projectile hit the target and made way for the streams of red-hot plasma, directing them vertically upwards.

“Specialists have already begun installation of the blowout preventer equipment, then they will install a hydraulic preventer for sealing the well,” the press service said.

On Monday, the IL-76 will deliver the gunners home. The command of the Central Military District will consider the issue of encouraging soldiers, sergeants and officers who took part in a unique operation.