US Army and Internet

February 2 2011
3
Now the US military will be able to join the social networks, so popular in recent times. Last week, with the approval of the Pentagon, the US Department of Defense issued an interesting brochure "US Army Social Media Handbook", where he signs in detail what a soldier needs his own page on the Internet. This document, on almost all 39 pages, tells you what to do and how on Facebook, Twitter or YouTube networks, and also warns you that in no case should you scold your leadership on networks and issue military secrets. 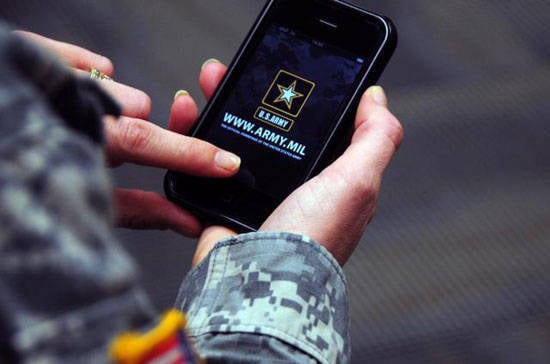 Not long ago, soldiers did not have the right to access the Internet on popular social networking sites from office computers. The authorities believed that the time spent on these pages was useless, and communication with other users was even harmful. But after it was monitored and researched by the Pentagon’s order, it became clear that social networks are not so bad, besides, they can even be useful, enhancing the image of the American army and helping to recruit future servicemen.

Permission to use Internet services such as Facebook, Twitter, Flickr, and YouTube was issued in February 2010. After that, more and more soldiers began to open their pages on the world wide web. The Ministry of Defense was quick to issue a guide on the use of social networks, which was soon sent back for revision. And recently, a new instruction was released, which was developed by the Internet and Social Media department of the Pentagon’s Department of External Relations, which gave specific instructions on how to create blogs for the military and secure their use.

On the cover of the released reference book, there is a photograph of a soldier in uniform sitting in front of the monitor, on which a Skype window is open. A serviceman is talking to his smiling family. The guide begins with explanations of why a homeland defender needs to create his own blog. The soldiers and members of his family are called the core of the nation, which will be able to rally the American people more firmly, to make the army stronger and more viable. With the help of social networks, those soldiers who are currently serving will be able to share their experience and knowledge with future recruits, or simply to tell about life in the army.

Further, after such a patriotic retreat, it is written in the book that with the help of social networks one can propagate the American army and create its positive image among the people. It will also help strengthen the command and patriotic spirit of the military, not to mention a more accessible connection with loved ones. The leadership of the army decided that since social networks are not going anywhere, then you need to learn how to use them for the benefit of the soldiers.

Also in this brochure published examples of pages and blogs that need to be guided when recording in your blog. For example, the Facebook page of Colonel General Raymond Odierno, the former commander of the US forces and the coalition in Iraq. A huge number of comments and enthusiastic reviews are written on each of his entries, such as: “Thank you so much! General Odierno, you're just a hero! ”,“ God bless you! Thanks to you, my son came back home safe and sound!

Special information, the general, of course, does not place on your page. He mainly publishes his old interviews and articles, but the military leadership believes that it is the call for patriotism and no special details about the army that is what is needed. When communicating in social networks, you must take the utmost care so that you do not inadvertently give out secret information about the plans and objectives of the American army.
The guide to the use of social networks provides a detailed list of what should not be done in the military personnel records. In the first place, in no case should one criticize one's own bosses, place information on the whereabouts, planned and ongoing operations, place photos of military facilities and equipment. Also, do not write revelations about their loved ones and colleagues. That is, if you cannot say any information in front of the whole platoon or write on the wall of your house, then this information is not subject to publication. It is not particularly recommended to add your boss as a friend; after all, you need to observe subordination here too.

Before compiling the list of forbidden information, the compilers of the manual studied in detail the experience of using social networks by military personnel of other countries. There was a case when due to the fact that one of the soldiers of the Israeli army wrote in detail about the place of the military operation, the time and number of his platoon. The operation urgently had to be canceled, and that the warrior was fired with a scandal.

Also, the scandal was associated with another soldier of the Israeli army. Last August, Eden Aberdjil posted photos on her blog titled “Military service is the best days of my life.” The girl held a photo session against the background of Palestinian prisoners. These photos were called sexy in the comments, which caused an international scandal. The Israeli army banned its soldiers from using social networks at military bases, and made it mandatory to delete all military photos.

In Russia, for the military, there are still no rules regarding the use of social Internet services, but in our country not every soldier has free access to a computer.