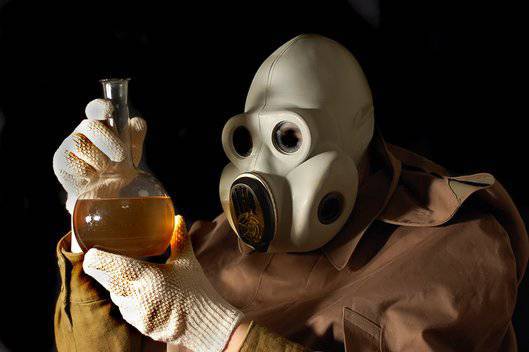 Recently, materials began to appear in the media that the US military is very actively building microbiological laboratories on the territory of the Ukrainian state, which constitute a potential threat to the population. In particular, we are talking about the construction of a reference central laboratory in the Kharkiv region, which is planned to be built not far from Merefa in the village of Shelkostation.

It should be noted that this is not the only American militarized biological laboratory built on Ukrainian territory. Back in 2010, an object was commissioned in Odessa, the main purpose of which was to study highly dangerous pathogens. However, at that time the appearance of the laboratory did not cause any complaints from the public. Now residents of the Kharkiv region are concerned about such a dangerous neighborhood.

The main reason that the largest joint Ukrainian-American project to create modern laboratories in the regions of Ukraine was not specifically advertised, and that the population, in fact, knows nothing about its tasks and goals, is the existence of certain side effects of military and medical cooperation, which conducted through the Pentagon. It is noteworthy that recalling the existence of at least one similar or similar project that would have been so generously funded by the Americans will not work, because there simply aren't any.

The reaction of the government and the Ministry of Health to the development of this project is very interesting. Information has repeatedly appeared in the press that under the guise of ensuring the epidemiological situation in the country, especially dangerous life-threatening experiments can be conducted, that foreign corporations and departments have established almost total control over the domestic system of the veterinary and sanitary-epidemiological service, and that further project implementation threatens the very existence of such sciences in Ukraine as virology and microbiology. Despite all this, the officials did not take any action to understand the situation.

It makes sense to analyze what is actually happening in Meref. So, in the Shelkostation, up to 2008, there was the Silk Plant Institute, which was then reorganized into a research department of the Institute of Clinical and Experimental Veterinary Medicine. Such a reorganization, in the first place, indicates that silk production in our country is going through hard times, despite the assurances given by the director of the newly established institute B.Stegnia. The main reason for the reorganization, he said, is the recently discovered activation of dangerous diseases: anthrax, rabies. It is not excluded the return of diseases that can not be cured by traditional methods, as well as those that have long been forgotten: the plague, black smallpox. That is why it is extremely necessary to create new research centers and research laboratories in which it would be possible to work on the prevention of their appearance and distribution.

Of course, the mission is very noble, and it is difficult to disagree with such arguments. However, on the other hand, until that time, both the sanitary epidemiological stations and the veterinary services somehow managed to cope with the appearance of infectious diseases. Thus, there is a doubt that the Americans simply out of good intentions decided to create their own laboratories in order to simply increase the level of the Ukrainian biological safety system, because for this it would be enough to provide Ukrainian colleagues with modern equipment and to learn a little. Moreover, the Ukrainian State Veterinary Service this year was recognized as one of the best in Europe in ensuring the control, detection and prevention of the occurrence of diseases among animals.

Therefore, quite naturally a question arises: why did the Americans need to improve what is recognized as the best, and would such a modernization not lead to the complete collapse of a well-functioning national system of epidemiological surveillance?

Of course, Ukraine is participating in the Biological Threat Reduction Program, sponsored by America. But do not forget that the validity of this program expired at the end of May of this year. Thus, any new construction of American laboratories in Ukraine is simply illegal. It is not excluded that the United States will try to extend the agreement, but this will require more than one meeting at the highest political level, and, accordingly, more than one month, or even a year.

The American representatives assert that the new laboratory does not pose any threat to the population, and that its location in Meref was chosen because of the existence of an autonomous closed sewage there, which is in no way connected with the city communications. At the same time, local environmentalists remind that a small river Rzhavchik flows near the proposed construction site. And in the event of an accident, most of the eastern regions of Ukraine, as well as part of Russia, will be threatened by the spread of especially dangerous diseases.

It becomes clear why the locals are so scared and worried. At the same time, as already noted, the authorities do not react at all to the numerous petitions and statements from the initiative groups of the town residents. Nobody wants to delve into the essence of the problems, doing traditional unsubscribing. So, in particular, S. Chernov, head of the Kharkiv Regional Council, asked residents to give the relevant services an opportunity to conduct a construction safety check and, if necessary, move the construction site (for all its illegality). Other policies hold the same opinion. Moreover, some even claim that the creation of a new laboratory will create a large number of jobs for the local population. One might think that in a provincial town half of the inhabitants are microbiologists and virologists ... And besides, no more than 10-15 people work in laboratories of this type. So such arguments cannot be sufficient for people.

In the light of the foregoing, it is necessary to say that representatives of the US military began to implement a certain strategy, which is aimed at forcing Ukraine to prolong the Agreement on the reduction of the biological threat. In particular, the company is engaged in this “Black and Vitch”, which has been operating in the countries of the post-Soviet space since the beginning of the 2000-s. In Ukraine, the first stage of the company's activities began in 2005, when the above-mentioned agreement was signed. It has expired, just like the Black and Whit accreditation.

Generally speaking, in all this stories with Americans a lot of obscure. So, for example, the very phrase “reduction of the biological threat in Ukraine” is causing some confusion. The question is who this country threatened or who threatened it? What kind of biological threat are we talking about? Why is the program actively promoted by the US military, and not the Department of Health? Why was an epidemiologically safe country chosen for experiments to reduce bio-threats, and not some African or South Asian state where epidemics are constantly occurring?

And everything is quite simple: it is no secret that Americans have long been trying to attract Ukraine to the implementation of their biological defense project. Therefore, we can say that Ukrainian and American interests in this case cannot coincide in any way, and Ukraine is only a convenient testing ground for especially dangerous infections, bred in Ukraine’s laboratories.

As you know, Americans tend to take control of all biological technologies in the world, because it promises multibillion-dollar profits. However, if previously they were hiding behind the fight against biological weapons, now another argument has been added - “the fight against international terrorism”.

In 90 of the last century, an additional protocol was developed in Geneva to the Geneva Convention 1972 of the year, which prohibited the development, production and stockpiling of biological weapons. In this case, it was about an effective control mechanism, because if chemical or nuclear weapons can be counted, then a similar technique cannot be applied to biological weapons. At that time, a list was made that included the 33 microorganism (they were considered potential components of biological weapons). Everything was fine, but the Americans in 2001 refused to sign this document, citing the fact that many of its points contradict the interests of national American security. All work on the protocol was discontinued, and a few months later a scandal broke out in America with envelopes filled with white powder, which allegedly contained anthrax virus. It is noteworthy that since the beginning of the 90-s in the United States began total vaccination against this disease ...

Meanwhile, according to some experts, the American project to reduce the biological threat is nothing more than an attempt to create a genetic-biological weapon. The mechanism is very simple: a virus is dumped into a certain area, the properties of which are checked on a group of Ukrainian residents with the help of a network of laboratories. After the outbreak of the epidemic, a trial batch of drugs or antivirus is sent to the disaster zone, and then American pharmacists start pumping out money from the pockets of Ukrainians (they need medicines!). Of course, all this is more like a regular American horror film, but who will guarantee that there is no certain truth in all this?

Evidence that the United States may well be engaged in the development of biological weapons may be due to the fact that in Georgia, until recently, there was a laboratory for studying a number of viruses, even those that had never been seen before in the post-Soviet space and from which existing vaccines are powerless. The greatest concern is caused by a bank of pathogens of acute acute diseases that was created during the US-Georgian studies. According to some sources, similar experiments were conducted in Vietnam, where the US military used unknown species of biological and chemical weapons against local residents.

Fortunately, at the beginning of this year, the US biological laboratory in Georgia was closed. One can only hope and believe that the Ukrainian authorities are smart enough to do the same, because the interests of the native state and the health of its inhabitants are much more important than free laboratories with especially dangerous viruses and pathogens.