From military to police

February 2 2011
3
State Duma Deputy Arkady Sarkisyan proposed replacing graduates of police schools, who, as a rule, receive district posts for military officers, reduced as a result of army reform. President Dmitry Medvedev liked the idea, and he recommended it to work out thoroughly. Arkady Sargsyan correctly believes that the main trouble of the Ministry of Internal Affairs is corruption, therefore, with his proposal, he proposes to strike at the very basis of the corruption pyramid in the country, to bring order to the lowest police units. In his opinion, the former military can help in this.

The local policeman is the person who is on the front line when dealing with citizens of the country, for many it is he who is the face of the police. It is on this basis that Arkady Sargsyan, who served in the Navy at the time (at the time of his dismissal he held the position of chief of staff of the Baltic Fleet base), suggests replacing district officers with officers under the age of 50 years, with service of at least 20-25 years that served in the army and return to the places of appeal. According to the deputy, such employees will not have to be provided with housing, since, with appropriate services, they will receive apartments from the Ministry of Defense.

According to the deputy, in the course of such a replacement, you can get an elite squad of Interior Ministry officers who are committed at the genetic level to the Motherland and “honed” to serve it. Who got real combat experience in hot spots and whose life cycle of serving the country will not be interrupted. Such precinct officers, according to Arkady, have real experience and skills in communicating with young people; weaponsThey are well aware of the price of human life and due to this they will be respected by Russians.

In the same proposal, Sargsyan proposes to retain all ranks for the new precinct, received over the years of service, as well as the right to receive a “military” pension, which will become an additional incentive for their work as precinct. In addition, the deputy, in the framework of his initiative, makes a proposal to withdraw the district police officers from the subordination of the police departments and territorial bodies of the Ministry of Internal Affairs, and subordinate them to the heads of the Public Security Police. After that, Arkady Sargsyan believes, local authorities will not be able to exert pressure on the district police officers, and they will become more effective in preventing and preventing crimes. In fact, the deputy wants to make local officers of sheriffs in the USA or police chiefs of Tsarist Russia from district officers.

After reading the proposals of the deputy, President Dmitry Medvedev put his resolution on the documents “The idea is interesting. Work through. Report it. After that, the paper went to the tables of relevant ministers: Anatoly Serdyukov and Rashid Nurgaliyev.

The relevance of this proposal will be evaluated there, because in the country the army reform is in full swing, according to official information, a significant number of officers' positions get reduced: from 355 thousand are going to be reduced to 150, i.e. up to 15% of the armed forces. The funny thing is that "shrink" our army to 1 million people planned all the last 20 years. The new “final” term of bringing to the final number of 2012 year.

According to the Ministry of Defense of 205, the thousand officer posts being reduced today, about 40, thousand, were vacant. With this in mind, the reduction is planned to send 165 thousand officers. And here the ministry has a certain margin of safety. 7,5 of thousands of officer positions are occupied by civilian lieutenants “biennial”; they will be sent to all of them for redundancy as their service goes, and their call has now been completely stopped. The 35,8 of thousands of officers, who have already reached the age limit of service, will help to make the reduction relatively painless. Anatoly Serdyukov promised that the army would part with them only after fulfilling all obligations to the officers, first of all he would provide apartments. In this regard, everything is relatively good in the country; in 2009 and 2010, 100 000 apartments were transferred to the military, the program, according to Dmitry Medvedev, will be fully implemented in the coming 2 of the year. The main problem for the Ministry of Defense is the reduction of about 120 thousands of young enough officers, which will need to be carried out. 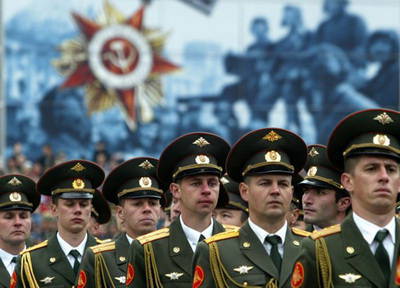 For those who are used to seeing only bad things in reform and shouting about a decrease in the army’s combat capability, it is worth recalling that the positions of lieutenants and warrant officers will mainly be occupied by contract sergeants. They should replace about 105 thousand vacancies. At the same time, their training will go in three directions: a part will be trained at special faculties of higher educational institutions for a period of 2 and 10 months, after which they will be able to take the posts of platoon commanders, senior technicians, and heads of workshops; others will graduate from sergeant schools (training for a period from 5 to 10 months); it is planned that after training they will be replaced at the posts of warrant officers and midshipmen; the third will complete district training centers in the 5,5 months and become commanders of squadrons, crews and combat vehicles.

And the salary in the new army will finally become decent, according to the president’s statement, the lieutenant in the Russian army will receive 2012 50 rubles from 000. per month, the commander of the units from 150 to 180 thousand - and this is money, which is comparable to the salaries of the military in the west. The newly minted sergeants receive at least 20 000 rubles., The salaries of current lieutenants. It will be possible to start the alarm only if the officers are dismissed and the non-commissioned officers are not yet prepared, but such an outcome is unlikely.

The idea of ​​a retired military, and now a deputy, certainly deserves attention, but already now it suggests the introduction of a number of amendments. So the proposal to send officers to "sheriffs" having a length of service in 20-25 years, seems rather dubious. The assumption that the current colonels, lieutenant colonels and majors around the age of 40 years suddenly go to the precinct at least strange. It is quite difficult to imagine them running around the entrances and catching drug addicts. In general, this is equivalent to using a microscope in the role of a hammer.

The most interesting proposal may be for young officers, lieutenants, senior lieutenants, for whom this would be a good continuation of their careers, with the opportunity to continue to serve the Motherland.

Paying attention to the lower links in the police hierarchy deserves approval. It is the district police officers of the PPS and DPS who are not at the forefront of the fight against crime. However, the reduction of our police is largely due to these posts. Throughout the world, emphasis is placed precisely on prevention and the prevention of crime, while we have a clear bias towards detection. For example, no one will touch the lieutenant from the criminal investigation department, while the sergeant from the PPS or the district officer will go under the reduction. After that, our lieutenant is likely to reveal another serious bodily or mobile phone theft, but was it not easier to try to prevent these crimes by sending PPP patrols to the streets of cities well equipped with technical equipment ..

The reforms carried out in the army and the Ministry of Internal Affairs give a wide scope for rational proposals and, most likely, the initiative of Arkady Sargsyan will not be the last.