The reliability of cruise missiles is provided by ground testing. 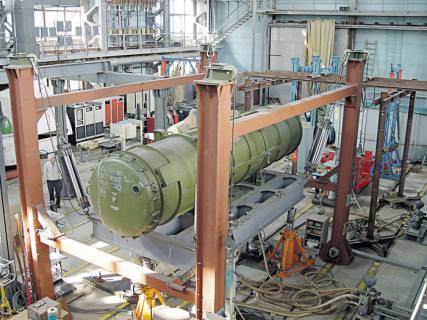 
GosMKB Raduga OJSC named after AND I. Bereznyak, one of the leading enterprises of Tactical Missile Corporation Corporation, was established in October 1951 in Dubna, Moscow Region. Employees of the enterprise, in collaboration with specialists from a number of experimental design bureaus and research institutes, were at the forefront of creating a fundamentally new area of ​​aviation-rocket technology for arming the Air Force and the Naval fleet countries. In total, the GosMKB Raduga carried out experimental development, testing, transfer to serial production and operation of more than 50 types of cruise missiles for various purposes, seven of which were presented over the past decade. Many of them can be called key in the creation of missile weapons. Almost all the developments were marked by high state awards and proved their competitiveness in the world market of military equipment, having received wide demand and high praise among specialists from foreign countries.

Time constantly puts before the creators of military equipment more and more complex tasks, great attention is paid to improving the effectiveness of combat use and improving flight performance. Modern technologies have significantly changed the appearance of cruise missiles: increased range and accuracy of hitting the target; while maintaining the high power of the warhead, the dimensions of the rockets became more compact, which greatly expanded the composition of the carriers and the applications.

Development and implementation of advanced technologies are impossible without the construction and continuous improvement of the laboratory and testing base. For many years, the cooperation of GosMCDB "Raduga" with research institutes of the military-industrial complex has been carried out in a number of areas. We note only a few of the most significant.

Today, the role of semi-natural modeling in the creation and development of BSU is generally recognized. The PNM complexes for the development of analog BSUs were created at GosNIIAS and GosMKB Raduga among the first in the industry. The role of ISM has immeasurably increased in the development of digital BSUs, since for a reliable and adequate evaluation of the onboard digital computer program in real time, it is necessary to initiate the computational process cyclogram along all branches of the onboard program in the process of simulating a flight with ISM.

When creating a modern rocket weapons One of the problematic issues is to ensure the mechanical reliability of the onboard systems and the rocket as a whole under conditions of intense dynamic effects, in particular, vibrations, impacts, vibro-impacts and acoustic noise. In the direction of solving the problems of strength and stability of cruise missiles in these difficult conditions, Raduga GosMCB conducted extensive studies of the vibratory state of rockets at various stages of operation with generalization and rationing of real mechanical effects. Methods and modes for bench tests of component systems and rockets in the collection have also been developed, methods for polygon modeling of flight conditions, methods for calculating and statistical forecasting of the vibration state have been developed. All these scientific and technical problems were solved by GosMKB Raduga with leading research institutes of the industry: GosNIIAS, TsAGI and VIAM. Their successful solution allowed developing a modern scientific and technical base (a number of industry standards, guidelines for designers [RDK] and GOST) and to ensure the required mechanical reliability of the developed cruise missiles.

With the advent of aviation complexes of energy-intensive ejection and stage separation devices, the question of ensuring the stability of on-board systems under the action of intense accelerations of a vibro-shock nature arose. In GosMKB "Raduga" volumetric studies of vibration-impact loading of cruise missiles and measures of protection against vibration shocks were carried out, and together with GosNIIAS these studies were generalized and methods of laboratory simulation of vibration shocks were developed.

The need to ensure rocket transportability by land transport at a distance corresponding to the size of the country’s territory required the development of standards, design conditions for the strength of the missile structure at the stages of transportation and bench test modes that simulate transportation. According to the settlement-theoretical direction, the joint efforts of the employees of the GosMCB Raduga and GosNIIAS were developed and released by the RDK. In the direction of the stand modeling of transportation, a theoretical base and experimental tools were developed, RDKs were issued, and then GOST.

An important area of ​​cooperation between GosMCB "Raduga" and GosNIIAS for more than 35 years has been solving the problems of ensuring reliability, assessing the resistance of rockets and their components to the effects of multifactor disturbances carried out in several directions:

development and implementation of ground tests of cruise missiles for resistance to mechanical and climatic influences, methods for assessing reliability indicators and typical operation cycles;
development and implementation of the methodology for testing cruise missiles operating in a given mode of simulation of autonomous flight for resistance to the effects of powerful multi-factor perturbations;
testing the fire and explosion hazard of missiles in emergency situations, as well as a unique experiment on a rocket track with an impact on a moving cruise missile shock wave;
testing for resistance to electromagnetic fields of natural and artificial origin. 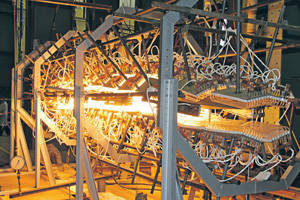 A base has been created at the enterprise that provides for carrying out an almost complete range of ground tests for the creation of new high-precision weapons and the modernization of existing samples. This can significantly reduce the time and cost of product development.

Laboratories are equipped with booths of domestic and foreign production, as well as booths of its own design, some of which have no analogues in the world.

In the course of ground testing of products, a number of issues are being addressed. The aerodynamic complex is represented by the wind tunnel AU-1 of supersonic and high subsonic speeds (the working part of a square section 0,6 x 0,6 m) and the wind tunnel AU-2 subsonic speeds (the working part with a diameter 1,05 m). Here, aerodynamic characteristics of the designed products are obtained, on the basis of which their optimum geometry is subsequently determined.

On the stands of semi-natural and mathematical modeling, the dynamics of the flight of the product and the hardware and software of the on-board control system of the products are tested. Particular attention is paid to the definition of the reliability of the created equipment when exerting an external impact. The test takes place in conditions as close as possible to the actual vibration, acoustic, mechanical and thermal loads that occur during storage, transportation or use of the product.

The elastic stand of comprehensive testing of products with a running engine allows for a comprehensive check of the performance of the on-board systems of the product according to the flight sequence diagram and testing of the layout and release systems of the units in conditions of a soft suspension of the product.
The antenna pavilion is used to measure the radio characteristics of antennas and radomes, as well as emission tests and electromagnetic compatibility.

The laboratory tests pyrotechnic, pneumatic and hydraulic devices specializes in testing the strength, tightness and functioning of parts, assemblies, units and systems operating under high pressure liquids, gases and when pyrotechnic devices are triggered.

Such a composition of the laboratory and test base serves as a reliable basis for the creation of equipment that has proven itself as part of the Armed Forces of our Motherland, and is also a necessary component for the search for breakthrough technical solutions without which development is impossible.

The inclusion of the Raduga GosMCB into the Tactical Missile Armament Corporation in 2004 contributed to an increase in financing the development of the production and experimental base of the enterprise. At present, in the sphere of the defense industrial complex, noticeable changes have been identified, connected with the strengthening of state support for the modernization of production. In 2010, the president approved the “Fundamentals of the state policy in the development of the defense-industrial complex of the Russian Federation for the period up to 2020 and the future”, in which innovative factors of organizational, economic, scientific and technological nature are identified as a necessary foundation for the development of the defense industry.

GosMKB "Raduga" is a member of five subprograms of the Federal Target Program "Development of the defense industry on 2007 – 2010 years and for the period up to 2015 of the year” to modernize the laboratory and production parts, the results of which will allow for more qualified ground tests and equip the production with the most modern equipment.