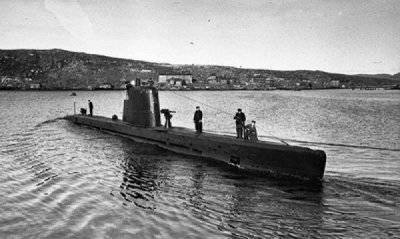 Specialists of the Black Sea Center for Underwater Exploration of Ukraine in the area of ​​Cape Tarkhankut in the Crimea during the testing of the deep-water apparatus detected a sunken Soviet submarine U-216. This is one of the 16 Soviet submarines of this type, the place of death of which has not yet been established.


Crimean "Pike" has participated in the Great Patriotic War, military campaigns made 14 300 running within days. Held five torpedo attacks. The commander of the lost crew - captain rank 3 Gregory Karbovskii. According to archival data, U-216 disappeared in February 1944 for an unexplained reason.

A careful examination of the hull of a submarine divers found that in one of the compartments there is a hole area 8 square meters. Probably the explosion of the depth bomb and caused the death of the submarine. Damage has only one compartment. In the remaining six, sealed tightly from each other, there is no water. Experts believe that everything in them remained as it was at the time of the death of the 69 boat years ago.

In Sevastopol, a working meeting of the chiefs of staff of the Black Sea fleet and the naval forces of Ukraine, which discussed the intentions of the parties to examine and raise the boat. The meeting was attended by representatives of the search and emergency rescue department of the Black Sea Fleet, emergency rescue service of the Ukrainian Navy, as well as employees of the department of the State Service for the Protection of the Cultural Heritage of Ukraine. The parties discussed the timing and schedule of work, as well as the composition of the interstate group of forces that will be involved.

According to experts, the work may be complicated by the presence of unexploded ammunition on the boat. Therefore, it was decided to conduct a more thorough examination of the hull of the boat by divers in order to objectively assess the state of the submarine ship. Based on the act of diving inspection of Shch-216, the specialized design bureaus will develop possible options for lifting. The discovery of a missing "Pike" has become a significant event for Russia and Ukraine. At the interstate level, a decision has already been made to lift the submarine from the 52-meter depth.

In the case of a successful ascent, the remains of the crew members (today the names of all the dead and the addresses of their relatives have already been established) will be buried with military honors, and the boat itself will become a museum. "Red Star" follows the events and will report it to the readers.

Ctrl Enter
Noticed oshЫbku Highlight text and press. Ctrl + Enter
We are
Installed the crew of the deceased attack aircraft found during the construction work of the bridge across the Kerch Strait216 lieutenants of the Military Technical University begin an independent life
Military Reviewin Yandex News
Military Reviewin Google News
27 comments
Information
Dear reader, to leave comments on the publication, you must to register.