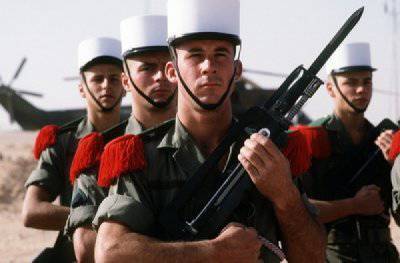 With savings in government spending, France hopes to preserve the operational capabilities of the army and the place of the second military power in Europe. This is precisely the aim of the bill on the military budget for 2014 – 2019, which was prepared by the French government and which will soon be proposed for approval by the parliament of the republic.


To achieve this goal will be very difficult. The ministry of defense, where the bill was drafted, does not hide the fact that work on it was under the most difficult financial conditions for the country since the Second World War. It was necessary to solve a difficult task - to prevent the fall of the defense capability, if necessary, to save money. A compromise was found: the military budget is frozen for the next two years at the level of 31,4 billion euros per year (this is 11,3 percent of French budget expenditures, or 1,8 percent of GDP). And by 2019, it will gradually increase to 32,5 billion. In total, the country's military expenditures during this period will amount to 190 billion euros - 179,2 billion will come from the state budget, another 6 billion is expected to come from additional income. Also, funds for replenishing the military budget will give, as planned, the sale of real estate by the Ministry of Defense (200 million), shares in enterprises with state participation (1,5 billion) and 4G frequencies to cellular operators.

“This will allow the army to protect French citizens in France and abroad, to protect our ideas about peace and freedom, as was done in Mali, and also to provide the necessary forces to maintain collective security in Europe,” President Francois Hollande said on the results government meetings. According to him, it was decided to fully maintain the country's strategic nuclear forces. They will still include two elements: submarine nuclear missile carriers and air forces. France will spend over 23 billion euros over the next 6 years to support the strategic nuclear forces.

But the total number of French armed forces during this time will be reduced by another 23.500 people. At the same time, only one-third of the cuts will fall on combat units (they will lose 8.000 people). Two-thirds of the cuts (16.000) will be held at headquarters, as well as in administrative and service structures. The ultimate goal - to 2019 year to bring the number of French armed forces to 242 thousands of people. France must maintain its position as the second military power in Europe after Britain, the ministry of defense of the republic notes.

Judging by the fact that the bill provides for the allocation of additional funds for intelligence and cyber security, these structures will be even more developed. In particular, the number of army special forces will increase by 1.000 people - to 4.000 soldiers. The adviser to one of the French think tanks, Francois Ginzburgh, considers such a measure justified: an increase in the costs of specialized units, which certainly cost more, is strategically more profitable. In addition, French Defense Minister Jean-Yves Le Drian has repeatedly expressed concern about the fact that the country is lagging behind in the field of cyber security, which every year becomes more and more relevant for the military.

Reducing the number of the army itself, according to the analyst, does not mean a decrease in its effectiveness. Proof of this, he says, is a successful operation in Mali, in which all 5.000 soldiers participated, several dozen combat aircraft and helicopters.

The military plans to spend about 17 billion euros to upgrade the material and technical equipment. Priority will be given to all the same means of intelligence: to the MISUS program satellites, they are expected by the 2017 year, as well as to the three CERES satellites that will go into orbit by the 2020 year. 26 unmanned aerial vehicles will be procured.

By the way, the draft law on the military budget sets the task of preserving the French military-industrial complex, in which 165.000 people are directly involved. In this case, the Ministry of Defense will still be forced to slow down the implementation of some contracts for the purchase of military equipment. In particular, the new Rafale combat aircraft manufactured by Dassault Aviation corporation may suffer from this. In the next 6 years, the army will put into service only 26 machines, and not 60, as planned earlier. Thus, the state refuses the previous agreement with Dassault Aviation on the annual purchase of 11 Rafale. The company claims that lower purchase volumes will make aircraft production unprofitable and impossible (the French army ordered these machines to 180, this year it will receive 120).

To save the concern Dassault authorities hope at the expense of exports. In particular, Defense Minister Jean-Yves Le Drian said India was interested in buying the Rafale plane. However, no sale agreements have yet been signed, which is of concern for the experts: if the planes cannot be sold, they will cost the budget another 4 billion.

The rhythm of purchasing tanker aircraft and military transport aircraft will also slow down. In the next six years, the French army will buy from Airbus only the 2 tanker from the 12 contractually required. From 50 A400M military transport aircraft, only 2019 vehicles will be put into service before 15. The renewal of the fleet of armored personnel carriers for ground forces will slow down: the army will receive only 2.080 from the 100 vehicles ordered.

Commenting on the prepared draft law on the military budget, the journalists of the Les Echos Economic Review note that the previous draft budget adopted in the crisis year 2008 was not executed. They also cite statistics showing that no military budget has been executed (since 1960, France adopted 11 of such bills), and conclude that the current budget will be adjusted.

Ctrl Enter
Noticed oshЫbku Highlight text and press. Ctrl + Enter
We are
Kudrin made a proposal to reduce the costs of defense and national security of Russia
Military Reviewin Yandex News
Military Reviewin Google News
26 comments
Information
Dear reader, to leave comments on the publication, you must sign in.