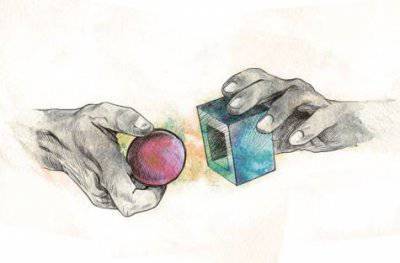 
Experts sometimes say that the doctrine of “controlled chaos” has been developed in the USA. “The old colonial concept of“ divide and rule ”has been replaced by the modern doctrine of“ controlled chaos ”. It is more convenient to export not democracy (more precisely, demagogy), not revolution directly, but chaos — and nationalism is its guide. ” But what of this, by and large, should? - this question is somehow bypassed in political considerations. This reticence is crying, and it is time to shed the light of God on it ...

This very vile, in fact, the doctrine, no country in the world, as it were, does not adhere. But there is another political doctrine, which is widely propagandized, and adopted by the United States and the entire progressive West - the spread in the world of "democracy as the power of the people" and its enduring values. If we look at the political reality, we will see how, before our eyes, the vast Middle Eastern region of the world is plunging into chaos, and we will see attempts to destabilize other countries of the world, under the slogan of bringing them closer to democracy. It is noteworthy that all these countries belong to the second or third, not the Western world, trying to pursue an independent policy and adhere to national rather than global, that is, Western values.

Even from these simple observations, it is logical to assume that one of these doctrines is fake (false), namely “democratic”, while “controlled chaos” is the real foreign policy strategy of the United States and its trusted satellites.

It would seem that the discovery that democratic fake covers the real expansionist policy of the West is not great, that “Western democracy” is the power of international American corporations and financiers — many people have been talking about this for a long time, but the democratic myth of the “power of the people” nevertheless lives and thrives. : he has become a kind of new god! Recall, quite recently, we (our fathers) believed in “communism - the bright future of mankind”: it turned out that this is a myth. Similarly, many people today believe in "democracy - the power of the people", so the democratic myth and the American policy of "controlled chaos" are based on their faith.

In connection with this, the mechanism of issuing a fake of "democracy" for the "power of the people" is of interest. The global leadership of the United States and the West was not established today, but yesterday, in an era of confrontation with the USSR, it was carried out differently, through global military-police control of its part of the globe. The simulacrum (copy, imitation, scarecrow - Wikipedia) of the “democratic power of the people” was born in the ideological confrontation of the West and the USSR, and after successfully using this “Trojan horse” against the USSR, there was, of course, a temptation to continue to ride it around the world.

However, the simulacrum itself “does not work” - it needs to be constantly stimulated - to heat up all sorts of campaigns. In the USSR, it was fueled by the struggle for the rights of dissidents; today, this strategy has been developed in the form of models of “soft power”, “civil society”, and “struggle for the rights” of Western friends, who in practice have an “orange” revolution. The most capacious of these concepts is “soft power”: the USSR fell, as we remember, without war.

Over time, the strategy of "soft power" came into conflict with the harsh military-police doctrine: why keep troops, bases, maintain proteges around the world, when their interests in the world can be achieved by information-sabotage and revolutionary technologies? Maintain the always weak against the strong, so that they kill each other as much as possible, and thus prevent the emergence of any center of power in the world without direct military intervention. In the end, economic arguments took over: the burden of a world policeman was becoming increasingly heavy for the United States and the West.

And at the end of the twentieth century, the model of dynamic stability, which is also called the strategy of “controlled chaos”, replaced the police static model of world stability. In practice, “dynamic stability” is expressed in initiating a split and civil strife in independent states, or pursuing an overly independent policy, and supporting pro-Western forces against state forces.

In the midst of such a "controlled chaos" with the help of the West, under the banner of "democracy", the "orange revolution" is accomplished and an American protege is brought to power. When the United States expresses concern for the victims of civil strife among civilians - it is crocodile tears. They "feel sorry for" only on television and only those who can be passed off as supporters of "democracy." All the rest are statistics.

If a country, even closely connected with the West, begins to demand too much sovereignty, for example, over its oil (Libya), or simply does not obey the "legitimate demands" of the West (Yugoslavia), it immediately reveals problems with democracy. And in the course goes "soft power", and then, if necessary, and military. (In Syria, the transition to the second phase is “stuck”, due to the veto of Russia and China at the UN Security Council.) The monarchies of the Persian Gulf have no problems with democracy - as long as they are content with the role of American puppets.

Recall the four basic principles of creating "managed chaos", which was jointly launched at the Institute of Difficulty at Santa Fe (USA), RAND Corporation, Freedom House and other global organizations:

1 - actions should be organized using new technologies (phones, Internet, social networks) and mobile initiative groups, be expressive and lightning-fast;
2 - it is necessary to unite the efforts of all opposition forces against the current political regime and personally its leader;
3 - to ensure the effectiveness of the revolution, it is necessary to have “agents of influence”, first of all, from among the representatives of power structures and the state apparatus, who, seeking money, power or under the threat of an international tribunal, can ensure regime change;
4 - in order to create mass protests, it is necessary to form spontaneous “non-leader” movements uniting representatives of the most diverse sections of the population, for various reasons dissatisfied with the current government. On the appointed “day X”, thanks to the same social networks, they are brought to the streets to participate in mass actions. Given that the only factor uniting them is dissatisfaction with the current regime, these entities, after reaching the goal (coup), will just as easily fall apart as they were formed.

It is obvious that fake “democracy” is the most important element of “controlled chaos”, providing, as it were, “legitimacy” to Western masters of provocations, manipulations and revolutions. In order to “disarm” it, it is necessary to dispel the myth of “democracy”: no power, no people, neither in America, nor in Europe, nor in Russia, nor in the Middle East. This is just a mechanism for controlling the people of the ruling class that has taken shape in the Western world. As long as it is sufficient for the West, it will stop arranging - some other mechanism will be installed, very possibly a dictatorship, the outlines of which, it seems, was outlined by former CIA officer Edward Snowden - an electronic matrix-prison. If you fail to expose the democratic myth, American expansion through “controlled chaos” will rush to world domination.