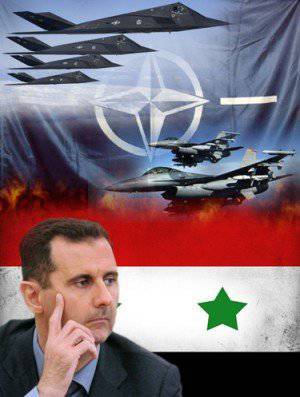 When information noise is too loud - it’s impossible to hear the truth behind it. When the media hostile to Syria shouts about hundreds or even thousands of victims of chemical weapons, and behind all this hysteria familiar alarming notes sound about a possible invasion of another sovereign country - all this is intended for an immediate effect. Within one day, to convene the UN Security Council, hastily, at night, to adopt a resolution on punishing the next demonized country - and hastily send the planes to explode the bombed "democracy."


It was such a hysteria in March 2011 of the events in the Libyan Benghazi - they say, what is there to think when the “dictator” is about to arrange a “mass slaughter” in the country's second largest city! And only later it turns out that the “peaceful demonstrators” who were allegedly bombed from airplanes are not at all peaceful, that no “struggle for democracy” even smells, but smells of big blood, oil and dirty money ...

Now, when it is necessary to punish another country - they let in so much noise that it is difficult to understand the truth behind it. At the initiative of Britain, Western countries urgently convened a UN meeting, apparently hoping to stun Russia and China and congratulate themselves on another brilliant blitzkrieg.
But - with the advancement of the Syrian army - not only the buildings and streets are cleared, but the truth is clarified.

24 August in the course of the counter-terrorist special operation in the suburb of Damascus Jobar, several servicemen became ill - they had asthma attacks. It turned out that the militants used hand-made shells with chemistry against them. Several soldiers died, others were hospitalized in serious condition.

The correspondent of the Al-Ikhbariya Syrian TV channel, Yara Saleh, who visited the place where the substances were found, said that the warehouse found in the tunnel dug by the militants was also a laboratory in which they stuffed shells with toxic substances. Two of these projectiles, according to the correspondent, were fired at soldiers in Jobar.

Speaking to the UN after this, the Permanent Representative of Syria to this international organization, Bashar Al-Jafari, noted that this quantity of hazardous substances is enough to destroy an entire city, if not an entire country. He then called on an international commission, in particular, the representative of the UN Secretary General for Disarmament Affairs, Angela Kane, as well as Professor Oke Selstrem, to come to Syria.
And when the commission arrived, the forces hostile to the UAR put sticks in its wheels, arranging a wild sensation, one in which the truth must inevitably drown.

Meanwhile, the Arab press confirms the findings, which were voiced by Russian Foreign Ministry spokesman Alexander Lukashevich, who, commenting on the incident, said that most likely the warheads with chemical substances were used by the militants. Just like they did in Khan Al-Asal.

When all the media trumpeted about the “next atrocity of the regime,” there was hope that the provocation prepared for the commission’s arrival was purely informational. Unfortunately, according to the latest data, it can be concluded that it was not only informational. Just like in Al-Hula last May, there were real casualties on the Western and Pseudo-Arabian TV channels with loud noises.

But, in the first place, their number is not at all the same as what the gangsters and the forces supporting them said. Therefore, they had to “take into circulation” videos from the Al Fateh mosque in Egypt.

Secondly, the alleged attack, most likely, did not occur where the "oppositionists" and their masters declared - but much further from Damascus. Therefore, residents of the areas adjacent to Jobar did not see any signs of himataka. The tragedy occurred closer to the city of Duma - that is, in the far deeper rear of the rebels. And this means that the army, which was preparing for the attack on Jobar that day, could not use chemical weapons - it would not have reached those positions.

The Arab publicist Muhammad Balut in the newspaper Al-Safir, as well as the Lebanese television channel Al-Mayadin, report the following.

At a meeting of the UN Security Council, which was hastily convened on the night of 22 in August, representatives of the United States and Western countries squealed that the chemical weapon was used and demanded a tough resolution. But Russia presented data from satellites, according to which the missiles were launched from the Duma area in 1-35 on the night of August 21. They were released from the territory, which is under the control of the militants, and came to areas that are also under the control of the "opposition". These were artisanal rockets similar to the one used in the Khan Al-Asal area of ​​Aleppo Province.

This territory is controlled by Islamist militants from the Dzhebhat An-Nusra organization associated with the sinister Al-Qaeda.

The dampress.net website provides additional details: the missiles may have been launched by an Islamist extremist organization called the Islamist Brigade, led by the gangster Zahran Allush. According to the site, this operation was sponsored by Saudi Arabia, which donated 4 a million US dollars to Allyshu. At the same time, the Saudis were not interested in the number of victims - they were only interested in the very fact of the use of chemical weapons.

Who were the victims of this monstrous game? Shortly before, as a result of the atrocities of the militants, many people went missing in the north of Latakia province. They were abducted by terrorists. In addition, part of the captives was from the province of Damascus and other areas of Syria. They were placed in one of the schools, according to which they fired missiles with warheads ...

After Russia's presentation of satellite data, the United States, despite the hysterical cries of France, began to make, although extremely contradictory, but still more restrained statements. Perhaps all the threats of the invasion sounding today are nothing more than a bluff, aimed solely at the psychological pressure on the Syrians.

But it was very strange these days to read the headlines of some Russian newspapers and news agencies that picked up Western tracing paper. Speaking about the position of Russia and China at the most urgent meeting of the UN Security Council, many Russian (!) Media were filled with the following words: “Russia and China do not allow to investigate the use of chemical weapons in Syria” - and the like. I would like the media to chase less sensations, and more to protect the country's foreign policy and its state interests. And also - so that the massacre committed by the rebels in the Kurdish regions of Syria would receive at least as much attention as the cries of the West about the "atrocity of the government" - which, as it turns out, the militants committed.
In addition, as stated by Tehran, Iranian intelligence also has information that the missiles were fired by the "opposition." Iranian officials strongly condemned the crime and called for the punishment of the terrorists.

Against this background, the statements of Western leaders seem all the more false and hypocritical. Already knowing what data Russia and Iran have, the most rabid of them - the French, the Turks and the British - continue to insist on the use of force against Syria. But Obama’s official statements have become more cautious. But they are contradictory - on the one hand, he states that he does not want a military operation without the sanction of the UN Security Council, on the other, he says that no options are excluded.

His following statement looks particularly ridiculous: they say that the USA is doing everything to overthrow Bashar Assad, but within the framework of international law.
The fact is that international law does not provide for outside interference in the affairs of a sovereign state. And this principle, repeatedly trampled by the United States, has not been canceled yet. So, even making oral statements about the need for the president of a sovereign state to leave, Obama and his ilk already violate international law.

And - according to the latest reports - the UN Commission states that it does not intend to go to the province of Aleppo, ostensibly for security reasons. But she was called into the country for precisely this purpose - to investigate the incident in Khan Al-Asal ...