Will Manas move to Kazakhstan? 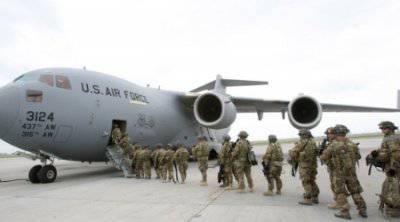 The Kyrgyz authorities have finally decided the fate of the Manas base. It closes. Meanwhile, the US military commanders announced that they did not intend to completely curtail their activities in the Central Asian region, and were looking for a new place to deploy the base. Among the options were Kazakhstan Aktau and Shymkent.


In an interview with the American television channel Pentagon Channel, the commander of the American military base in Kyrgyzstan, John Millard, said that there was no curtailment of activities, but the issue of "moving to another place" was being resolved.

It is worth noting that, according to the law on the denunciation of the treaty on the American base in Kyrgyzstan, all the relevant negotiations should be completed by January 11, 2014, and by the summer of this year, the Americans will have to leave Bishkek.

The American airbase in Bishkek, which later became the official name of the Transit Center, was established at Manas International Airport in December 2001 and still serves as the main transport and logistics hub for the transportation of goods to Afghanistan, along the so-called northern route of delivery. According to official information, the center has 1,5 units of thousands of US military and civilians who are engaged in the operation of NATO's Enduring Freedom forces in Afghanistan.

As is known, the complete withdrawal of troops of the anti-terrorist coalition in 2014 from Afghanistan will not occur, this information has already been officially confirmed by the US military command. Therefore, to say that the Western mission in Central Asia is nearing completion is premature.

Political analyst Kurban Yuvshanov told Italics that, judging by the activity of the US military command today, there is a hurried search for the territory to which the military contingent can be relocated from the Manas base.

“Central Asia is interesting to the USA not only from the point of view of ensuring security in Afghanistan, but also on the basis of the global geopolitical tasks of the Americans. Therefore, the White House does not want to miss this region, hence all the talk about projects that should weaken Russia's position here. In particular, this dictated the projects The New Silk Road and Nabucco, strengthening the role of the United States in Uzbekistan and Turkmenistan. From this point of view, Kazakhstan seems to be a country, to a lesser extent embroiled in the orbit of American interests, and it is quite possible that the American generals are looking to Kazakhstani territories for the potential deployment of their base here and strengthening their own political and military influence, ”Yuvshanov notes.

However, while the US military does not want to finally disclose their plans for a possible relocation of the base, apparently still hoping that they will be able to convince the Kyrgyz authorities to reconsider the denunciation of the Manas treaty. In particular, this can explain the fact that the statement of the commander of the American base in Kyrgyzstan, John Millard, was later removed from the official website of the Pentagon channel.

Experts note that Americans are eyeing at once to several territories in Central Asia, where the base could be moved, in particular, in the field of view of the US military command - Aktau and Shymkent in Kazakhstan, Kulyab in Tajikistan and the possible integration of the American base in the Uzbek city of Termez.

Speaking of the fact that now there is an active search for a new territory, John Millard stressed that a full-scale work has already begun on the complete curtailment of activities in the transit center in Bishkek.

“According to President Obama and representatives of the ISAF international security assistance forces, by mid-July 2014, when we will have to completely withdraw from Bishkek. the withdrawal of troops from Afghanistan will not end, so the activities of our base will need to be continued, and, apparently, it will have to be moved to another place, ”said Millard.

Alisher Khamidov, an expert from the Institute of Economic Studies of Central Asian countries, told kursiv.kz that, on the one hand, Kazakhstan seems to be the most convenient option to move the Manas base, due to the fact that by consolidating in this country, Americans can count on countering the integration processes of Astana with Moscow. At the same time, Akorda can continue to convince Russia of its neutral position, and declare that the opening of a certain military unit of the Americans in the Republic of Kazakhstan is only the country's contribution to ensuring security in Afghanistan.

“This is possible, but the prospects for this project are rather vague. Although, active American and British diplomacy in Kazakhstan shows that, despite the close relations with Moscow, Astana does not intend to move much further from the West. In particular, the joint exercises of the armed forces of the United States, Great Britain and Kazakhstan - the Steppe Eagle, which are gaining momentum, underline that both the United States and Britain, and Kazakhstan are interested in cooperation in the military sphere with each other. Therefore, it is possible that something will appear in Aktau or Shymkent, or near Almaty, but I do not think that it will be called a base, but will come up, as in the case of Uzbekistan, with some kind of inconspicuous name, like the antiterrorist Center. But the essence will not change, it will just be possible to avoid uncomfortable questions, ”says Khamidov.

However, he is extremely skeptical about the possibility of the US military moving to Kazakhstan, suggesting that if such an option is considered, it is only as a backup.

“Still, the Kremlin will not approve of this, and it will be difficult for Akorda to take this step,” he said.

At the same time, experts noted that a certain hint at the possibility of expanding the US military presence in Kazakhstan was made by the commander of the Airborne Forces of Kazakhstan, Daulet Ospanov, during military exercises with NATO forces in Kazakhstan.

"Every year the format of the exercise" Steppe Eagle "is changing and becoming more complex, the territory of the international exercises is also increasing," said Ospanov.

How much this territory can increase, it remains only to guess, perhaps it will grow to a full-fledged military base of the forces of the antiterrorist coalition in Kazakhstan or to the so-called Center for Countering Terrorism.

Note that on the basis of the memorandums signed between the government of Kazakhstan and the United States yet 15 December 2001 of the year and 10 of July 2002 of the year, the US military can freely use the air corridor of Kazakhstan. In February, 2009, the American side received the official consent of Kazakhstan to the transit of civilian goods by land transport through the territory of Kazakhstan in order to ensure peace and stability in Afghanistan.

Also, information that RK receives some proposals from the United States about opening a full-fledged US military base on its territory periodically leaks, but Akorda hesitates because of opposition from China and Russia.

Moreover, back in 2010, the question of moving the Manas base to the territory of military airfields in the Almaty region, in particular, in Zhetygen, was actively discussed. Allegedly, this was the condition of the West for the possibility of holding an OSCE summit in Kazakhstan. But then the American base in Kazakhstan did not appear. American General David Petraeus, in turn, said that the leaders of Kazakhstan and the United States do not even consider the possibility of opening a US base in Kazakhstan and this issue has never been discussed.

Today, American forces have their own stakes in Uzbekistan, a base operates here in the city of Termez, in Bishkek, Kyrgyzstan, there is the largest location of the NATO armed forces in Manas and the US military center is also located in the Shorabad region of the Khatlon region of Tajikistan.

It is worth saying that Tajikistan is also a potential place where Americans can move from Kyrgyzstan, and seems to be the most preferable and more likely than Kazakhstan.

"Tajikistan can become an alternative to the Manas military base in Kyrgyzstan. After the withdrawal of troops from Afghanistan in 2014, the US military base Manas will be closed, and to prevent threats from terrorist and extremist organizations, especially Al-Qaeda and The Taliban "in the region, it is necessary to create a new operational security center," said American co-singer Dani Lee Burton.

Ctrl Enter
Noticed oshЫbku Highlight text and press. Ctrl + Enter
We are
Dangerous flight of Americans from Manas to AktauWho is it NATO? Talk about the American military base in the port of Aktau - the purest fantasy
Military Reviewin Yandex News
Military Reviewin Google News
29 comments
Information
Dear reader, to leave comments on the publication, you must to register.