The war in Syria to be! Here we go 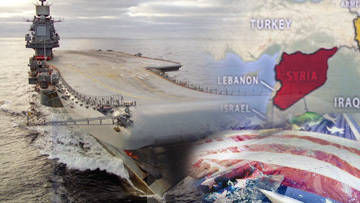 
And again in the air smell of chemistry. Chemistry of a big regional war with a taste of “anti-people” sarin, which has already replaced the rather outdated reasons for the impending war with Syria. Who already remembers how the claims of the West and its Middle Eastern allies began: support for anti-government rallies, demands for the leader of Syria to give more freedom to the people, stop the president’s wife to make luxury purchases ...

The essence of all these claims was reduced to one thing - the president should leave. But the president stayed. The requirements of the West fulfilled and even in parallel with varying success continued to tamp overseas militants throughout the Syrian Arab Republic.

Now, on the agenda is the frightened and too clumsy command of Gaza, which too clearly resembles Iraq ten years ago.

“In the UN furnace. In the furnace of these bureaucratic verbiage! ”Probably, this is how you can express the position of the United States in relation to the Syrian problem today. The US Secretary of Defense comes to the fore, announcing that he is waiting for only one thing - an order from the President “To bomb!”

In the fire of these bombings, all the arguments that the United States appeals today will dissolve. In the first place there will be only one goal - the expulsion or physical elimination of the recalcitrant leader of Syria. Too many similar examples in the last 15 years: Milosevic, Hussein, Gaddafi.

However, not all so simple. And the author of this opus took the liberty to fantasize a little, and what will turn the planned US event for the United States and its allies in the region.

Apparently, the United States is planning to re-implement the Libyan scenario, the essence of which was to bombard key military and civilian objects and seize the capital of the state by special forces.

As seen from the latter NewsUS instructors have been training these units for the past six months. Created several camps in Jordan. The French media report that about a thousand "bearded graduates" trained by American instructors have already crossed the Syrian border.

With regard to the bombing, the United States, as in Libya, will again not be able to do without the support of its loyal allies in Europe and the Middle East.

On the other side of the scale are the allies of the legitimate president of Syria: Iran, Russia, Venezuela, China, Kurdish, Lebanese and Iraqi armed militias.

Let there be a fight!

Implications for the UK and France

In addition to diplomatic wrangling with Russia and China, the freezing of many bilateral treaties, the above-mentioned countries may face the problem of the return of many and many "bearded sons of the Fatherland." There are only about a thousand of them in Syria just now. And of course, it would be more profitable for the French and the British if such a contingent was dissolved in the fire of international intervention in Syria ... But, right there, the leaders of these states declare the need for military intervention in the Syrian conflict.

Good. The Syrian Arab Army will be eliminated. The Syrian government will be biased. And what next? That's right, international sponsors will block the cash infusions of the militants. Destroy them simply will be no one. So, it will be time to return home, to London, to Paris, to dozens of other European cities.

Radically-minded young people who know how to handle different types of weapons and even have sarin production technology in handicraft conditions, on the streets and in poor densely populated quarters of European capitals are the rosy dream of tolerant Europe of the 21 century Europe that survived the attacks in London, Madrid, last year's French shooting special forces. The sharp increase in the threat of a repetition of these events is a fact.

What can we say about the arrival in Europe of thousands of Syrian refugees. By the way about them.

Briefly and clearly. A state with a population of six million people has already accepted about a million Syrian refugees on its territory. This situation is extremely negative for the growth of social tension in Jordan, not to mention the cost of the treasury to maintain hundreds of thousands of people who do not work.

What will lead Jordan's armed intervention in the war in Syria? That's right, to a sharp increase in the flow of refugees to Jordan. And who knows how long the Jordanian treasury will last?

The problem of the massive flow of Syrian refugees is also relevant for Turkey, the entire border area of ​​which has been turned into a mixture of refugee camps and camps for training and serving international terrorists.

This is clearly not to the liking of the local Turkish population. And in general, the majority of ordinary citizens of Turkey, whose hot temperament we had already met a month ago.

As far as socially explosive Turkey’s intervention is, it’s just scary to imagine if the whole Turkey boiled for about three weeks even because of possible cutting down of one city square.

Oh yes. Also the Kurdish problem. It so happened that Kurdish militias sometimes shoot or blow up Turkish border patrols. The latter, in response, carry out mass operations to clean up possible attackers. In general, the friendship does not work.

Mutual hostility will grow into what, if the Turkish government attacks the one who promised his own autonomy to several millions of Kurds, it is impossible to even imagine!

In addition to the revenge of the Kurdish militias, Turkey should be greatly concerned about the massive armed response of Syria. For boiling.

What threatens Israel? The refugees Transition of terrorists across the border in Israel. But besides this, there is also a massive rocket attack and terrorist attacks from not only Syria, but also from the fighters of the Lebanese Hezbal movement and, most importantly, from the only ally of Syria in the region - Iran.

Well, here Iran should already enter the business with its numerous promises to cut off the Gulf of Hormuz, through which the above-mentioned states transport about half of the total oil and gas produced in these countries.

Iran in this case is simply nothing to lose. As mentioned above, Syria is the only ally of Iran in the region. The countries have concluded a joint defense agreement in the event of an attack on one of these countries.. Finally, the Iranian government must clearly realize that after the fall of Syria, it will be Iran’s turn.

There are only economic strikes that will affect the United States to a much greater degree than the fighter brought down by the Syrian air defense or a terrorist attack on one of the American military bases.

Debt obligations to China, a quarter of the total oil supplied to the United States from Venezuela.

For a country in economic agony, such blows can be much worse, and more important than the possible benefits of the war with Syria.

The above analysis is extremely superficial. The main consequences for the participants of the attacking side will be millions of Syrian refugees, possible popular unrest within the participating countries, economic strikes performed by Russia, China and Venezuela. Well, and in detail: a retaliatory strike by the armed forces of Syria and their allies, numerous terrorist attacks, as well as a mass exodus on the homes of foreign fighters who fought in Syria.

The author deliberately left open the question of the role of Russia in all this mess. The Libyan variant is possible, when the Russian leader behaved worse than a rag. The repetition of the South Ossetian variant, connected with the direct military intervention of the Russian army, is possible, but only one! The lack of a common border in Syria and Russia.

Who knows? Perhaps all this tension, as before, will be reduced to the next verbal battles of diplomats and a return to Quo's diplomatic status.

In the meantime, let's analyze the current situation.

Ctrl Enter
Noticed oshЫbku Highlight text and press. Ctrl + Enter
We are
About Stalin and KhrushchevWho will be the next victim of destabilization in the Middle East?
Military Reviewin Yandex News
Military Reviewin Google News
641 comment
Information
Dear reader, to leave comments on the publication, you must to register.