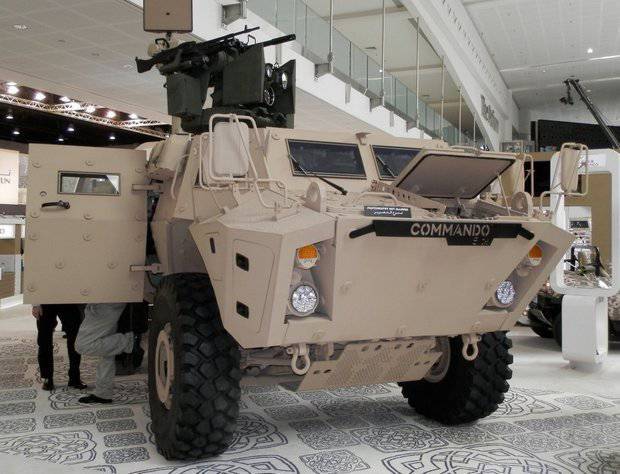 Textron Marine & Land Systems (a division of Textron Systems) unveiled the details of an agreement signed with the Command Command for Armored Vehicles and Weapons of the United States Army for the supply of advanced COMMANDO armored personnel carriers with the 4x4 wheel formula for Colombia NE.

It is planned to supply 28 of a COMMANDO armored personnel carrier with a wheel formula 4x4 worth $ 31.6 million.

COMMANDO is a family of multifunctional four-wheeled armored vehicles capable of performing various tasks. Carefully tested and proven in difficult conditions, the COMMANDO family of machines offers a wide range of protection that exceeds the MRAP level, unsurpassed road and off-road mobility, and sufficient firepower.

The family of cars Commando 4x4 is in service with several countries. The largest user is the US Army, which uses them as an advanced M1117 (ASV) security guard vehicle and an M1200 artillery observer armored vehicle.

Commando is also used in a number of other countries, including Afghanistan, Bulgaria, Colombia and Iraq, they have recently been ordered by Canada. To date, more than 4000 machines of the Commando family have been produced, and monthly 48 vehicles are produced.

Ctrl Enter
Noticed oshЫbku Highlight text and press. Ctrl + Enter
We are
World market and production of armored vehicles (part 2 of 3)What light armored vehicles will be in demand in the future?
4 comments
Information
Dear reader, to leave comments on the publication, you must to register.