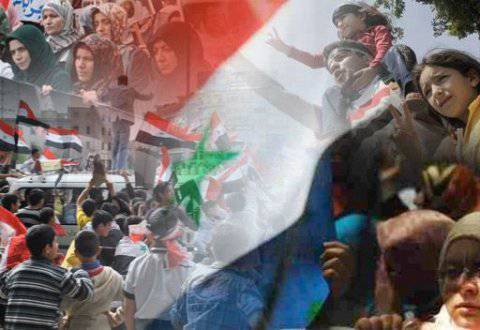 Some kind of magical coincidence of dates again and again makes you think that the same directors are behind a variety of events. So, March is known as the month of aggression (Yugoslavia-1999, Iraq-2003, Libya-2011), October is the month of unconstitutional coups (Moscow-1993, Belgrade-2000). But 20-e of August - the time of large-scale provocations and fraud. Some of them led to serious, destructive consequences. In August, 1991 of the year, a group of people who tried to save the USSR were falsely declared “putschists” - and the real putschists put the country under the knife. In August, 1995 of the year - the Mercale market in Bosnian Sarajevo was fired upon - and the bombing of Serb positions began - a prelude to further aggression against Yugoslavia. Recent история - just two years ago, on the same August days, all the major TV channels showed Libyan "rebels" raging in Tripoli Green Square. Then it turned out that those shots were filmed in Qatar, and at this time NATO special forces acted in the present Tripoli, ruthlessly and coolly destroying all life, all resisting ...

And now - August-2013. Major provocation around the chemical weapons in Syria.

The commercials shown by the so-called "opposition" raise many questions. Some of them have already been exposed - they show people who recently died in the Al Fateh mosque in Egypt. But about other cadres, the opinions of the experts were divided. Even such an anti-Syrian television channel, Euronews, showed a statement by Stephen Johnson, a researcher at the Cranfield Institute of Forensic Medicine in the English City of Cranfield. He said the following: “On some videos, what is happening seems too realistic, as if the director had set this scene. This does not mean that we face fraud, but it is doubtful. So, some victims have foam on their lips. It seems to me too white, too clean. This does not correspond to the symptoms of damage to the internal organs, which was to be expected. In this case, the foam should be mixed with blood or bile. "

The expert added: “At this stage, everyone wants to hear a definite answer: whether or not the use of chemical weapons took place. But on the basis of the video data it is still premature to draw any conclusions. ”

Many say that on rollers, in addition to the dead people, allegedly from chemical weapons, quite lively people are visible - but they are without gas masks, even without respirators and masks. It is clear that if there were serious chemical hazards, they would be forced to use at least some personal protective equipment.

Russian Foreign Ministry spokesman Alexander Lukashevich said the following about this:
“Government forces in recent days carried out active operations against militants in various directions, including in the eastern suburb of Damascus. Early in the morning of August 21 in this area from the positions taken by the militants, a self-made rocket was launched, similar to the one used by the 19 March terrorists in Khan Al-Asal, with an unidentified chemical poison. Reports of civilian casualties. "

Lukashevich’s commentary on the website of the Russian Foreign Ministry also emphasized that “it looks a lot like attempts at any cost to create a pretext for putting demands on the UN Security Council to side with the opponents of Syria and thereby undermine the chances of convening the Geneva conference, which is scheduled for August 28. meeting of Russian and American experts.

The problem is that many eyewitnesses who were near the eastern suburbs of Damascus, completely deny the very fact of the use of chemical weapons. And where the videos presented by the “oppositionists” were made is unknown. After the mankind "passed" combined shots of the assault on Tripoli in Qatar, it would be naive to trust such "evidence" from the same forces.

Thus, the stuffing about the alleged "use of chemical weapons" by the Syrian army could have the following objectives:
1. To divert the UN commission to investigate the use of chemical weapons from its true work - check the facts of the use of a warhead with "chemistry" by the 19 militants in March 2013 in the Khan Al-Asal area of ​​Aleppo Province.
2. By informational provocations, to stop the successful offensive of the Syrian army on the suburb of Damascus Jobar, where the armed gangsters, constantly firing at residential buildings and other buildings of the capital with mortars, strengthened.
3. Attempt to disrupt the Geneva-2 peace conference on Syria, the preparation for which by the efforts of Russia is in full swing.
4. Once again, to discredit the Syrian leadership, accusing it of “killing civilians”, and to justify all the heinous crimes of “oppositionists” thugs.

So, with the videos provided by the "opposition", for the time being absolutely nothing is clear. But some NATO leaders are not waiting for any investigation and no conclusions. They pass their verdict themselves - on the basis of their own interests.

And the French Foreign Minister - the very same France, under the colonial yoke of which for many years was Syria - made a sharp statement in which it calls for brazenly trampling all the norms of reason and international law.

According to him, a “force reaction” is necessary. Burning with showy anger, Fabius refers to his meeting with the leader of the Syrian "opposition", the self-named "President of Syria" Ahmad Zharboy, who, naturally, has no doubt that the chemical attack was and calls upon the heads of his former compatriots - the Syrians - a hail of NATO bombs .

In the destruction of the Libyan Jamahiriya, it was France that played the “first violin”. Then the openly aggressive Nicolas Sarkozy was in power, who had his personal interest in Tripoli - he borrowed money from Gaddafi for his election campaign, and when it came time to pay the bills, he, as the most primitive thug, dealt with the creditor. At least, he took an active part in the incitement of the bombing of Tripoli - this new, as Gaddafi said, “crusade”. And it was the French aircraft that first began to bomb the Libyan cities.

Now the socialist Hollande is allegedly in power, who has built his campaign on criticizing Sarkozy’s rule. So what? His foreign minister, like the Gallic rooster, pricked his feathers and was preparing for the next "crusade" in the Arab region. Obviously, without the approval of Hollande, Fabius would not dare to say a word.

Not far behind Fabius and his Turkish counterpart Ahmad Davutoglu. He also calls on the thunder and lightning of the Syrians. And, of course, not in a hurry to wait for any results of the investigation. Naturally, how can an objective Turkey be - a country through which the main stream of bandits and weapons enters Syria? The country to which the wealth of the Syrian people is leaking - bread, equipment of looted factories, oil?

Davutoglu “forgot” how quite recently Erdogan’s regime brutally dispersed protesters in Taksim Square. More on the pavements did not cool down the blood of the dead demonstrators. Traces of chemical burns on the faces of the protesters have not healed yet - the Turkish police added chemical substances to the skin to the water from the water jets. Davutoglu closed his eyes on the crimes of his boss Erdogan, who used toxic gas against citizens on Taksime. And when Erdogan was asked a direct question about these atrocities, he cynically said: "The Turkish police successfully passed the democracy test."

Of course, one can say that the number of demonstrators killed by Erdogan is incomparable with the number of those killed, who are accused of killing the Syrian army. But then, the demonstrators in Turkey were peaceful. They did not take weapons into their hands, did not bombard residential buildings in Istanbul and Ankara with rocket-propelled grenades, did not capture cities and towns, did not blow up people in schools and offices, did not arrange monstrous mass slaughterhouses, such as, for example, the killing of 450 Kurds near Tel Abyad , on which both Fabius, and his chief, and transatlantic bigwigs successfully closed their eyes.

Today, Fabius and Davutoglu pass in front of an unknown examiner the very same “democracy test”. And who is the examiner? Isn't that the most faceless force that directed aggressions, coups and provocations in the USSR, Serbia, Bosnia, Iraq, Libya, and now in Syria? And this power is not just people. Her name is not just Fabius, Davutoglu, Erdogan, Clinton, Bush, Hollande, Sarkozy, Obama ... Her name is the capital, the ruling ball and killing so many people that it is impossible to count, just as it is impossible to count the number of stars in the sky.

Ctrl Enter
Noticed oshЫbku Highlight text and press. Ctrl + Enter
We are
Armored vehicles of Yugoslavia. Part of 6. Wars in the ruins. Bosnia and Herzegovina. Kosovo. Macedonia20 years after the war in Bosnia 1992-1995: rare photos of the conflict
Military Reviewin Yandex News
Military Reviewin Google News
381 comment
Information
Dear reader, to leave comments on the publication, you must sign in.