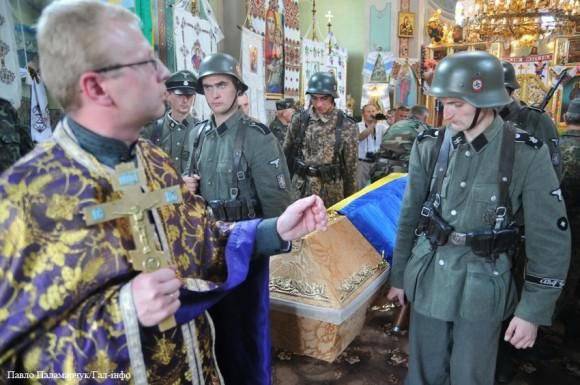 On various talk shows on Ukrainian television, representatives of the Freedom party constantly say that they have no relation whatsoever, neither to the fascists, nor, especially, to the Nazis. However, the actions that conducts "Freedom" indicate the opposite.

So this time, in general, the holy cause, the reburial of the remains of the dead, the party "Freedom" turned into a Nazi sabbath.

Pay attention to the shape of people who are engaged in reburial. This is not a form of the OUN-UPA, which, albeit with a stretch, can be excluded from the list of war criminals (although there are more than enough crimes on their account), it is the Waffen SS form. An organization that all states, without exception, have recognized as a criminal organization. And what these guys were doing during the war, knows any student.

And the presence of the Ukrainian flag next to the SS-men, I personally, as a Ukrainian, insults and revolts. It would be much more appropriate to cover the coffins with the flag of Nazi Germany, at least, these people died behind it. Further on the action details:

In Lviv in with. Hologory of Zolochevsky district held a solemn ceremony of reburial of the remains of 16-x fighters from the division "Galicia". The remains of the fallen warriors were found by the search engines of the municipal enterprise of the Lviv regional council "Share." 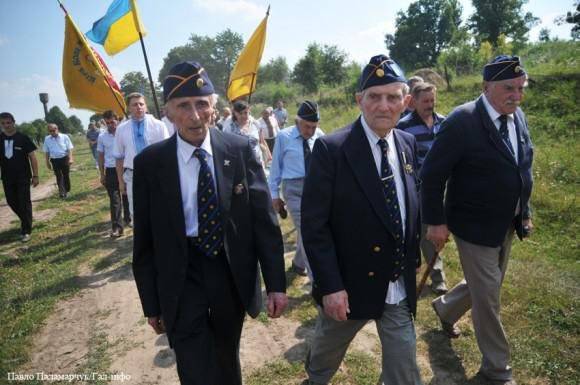 Chin reburial began with a memorial service in a rural temple, reports Tsenzor. NO. Then, with a solemn march, the funeral procession moved to the cemetery, where the burial of the remains of the divisional soldiers took place. After the public meeting was held, at which Oleg Pankevich, people's deputy of Ukraine from Svoboda, deputies of the regional council, chairman of the village council, representatives of veteran public organizations and local activists spoke. 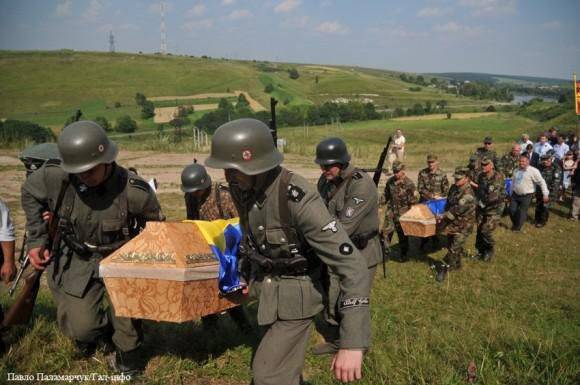 Speaking at the meeting, Svyatoslav Sheremeta, director of the enterprise, Share, noted that information about the burial of the enterprise’s search engines was long overdue. But only this year, thanks to the village head and the old-timers of the village of Hologory, they managed to find an abandoned burial of the divisional soldiers who died here in July of the 44. “Today, our fallen soldiers of the“ Galichina ”division, in the presence of a populous community, received a memorial prayer and military honors. Eternal memory of them,” said Svyatoslav Sheremet. He also thanked Oleg Pankevich, people's deputy of Ukraine, who was present at the reburial for the fact that in the 2007 year, being a deputy of the regional council, he initiated the creation of the public utility company Dolya. "During the operation of the CP ENP" Share ", its search engines found a lot of unknown abandoned burial places of Ukrainian patriots - fighters for the independence of Ukraine," the report said. 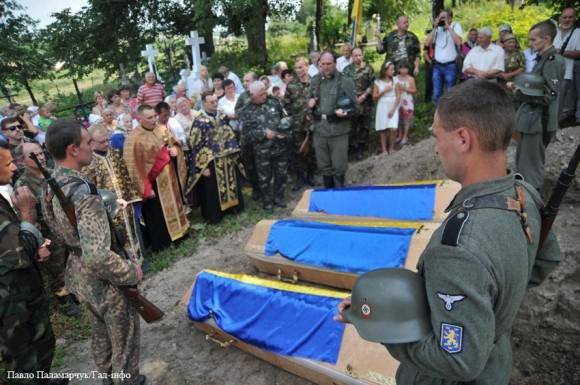 Recall that on July 10, the search engines of the Lviv Regional Council “Share” on the outskirts of the village of Gologory, Zolochiv District, found a sanitary burial site for victims of the Second World War. In the common grave, which in its size reached the 2x2 meter and was the depth of the 1,2 meter, the remains of sixteen people rested. According to the researchers of the ENT “Proportion” CP, the remains found belong to the soldiers of the “Galichina” division, which in July 1944, as part of the Wehrmacht’s troops, participated in the battle known in stories as "Brodovsky cauldron." The fact that the remains belong to the divisional warriors is confirmed by the artifacts found in the excavation site: remnants of cloth from uniforms, buttons from German uniforms, shoes, rings, awards and other items of military ammunition. 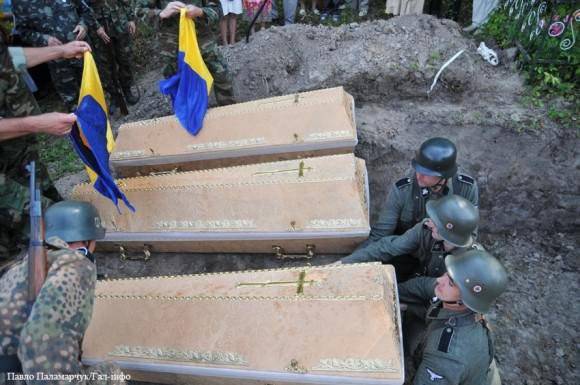 However, the specialists of KP "Share" have certain doubts that all the remains belong to the soldiers of the division. One of the awards found in the excavation, the so-called Knight's Cross of the Iron Cross, with a swastika and the indicated year 1939, could not belong to a divisional soldier. Consequently, as the enterprise director Svyatoslav Sheremet noted, there are grounds for asserting that among those who were buried in the grave are the remains of at least one Wehrmacht soldier. 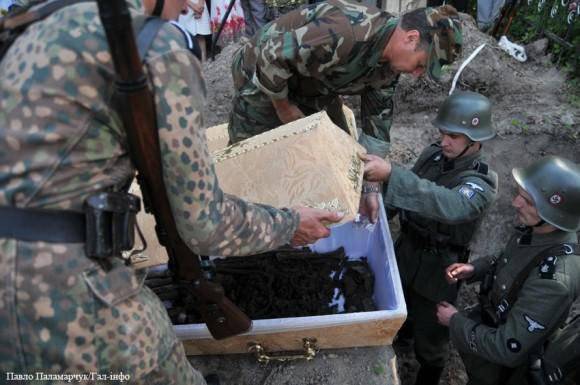 At the same time, journalist Vakhtang Kipiani commented on this event: “A wild photo walks today on Facebook - our contemporaries in German uniform with a swastika on helmets participate in the funeral service of the SS Galicia who died in 1944. But incomplete information = manipulation. For At the reburial there were also reenactors in the Soviet form. 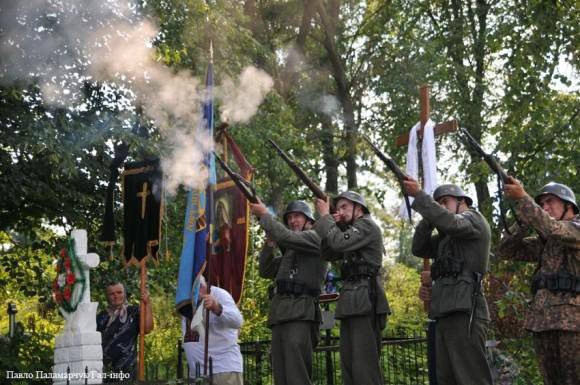 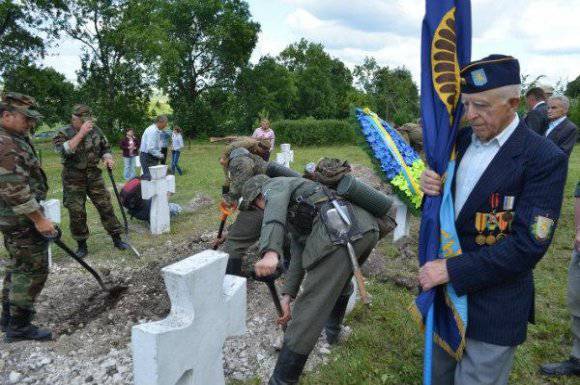 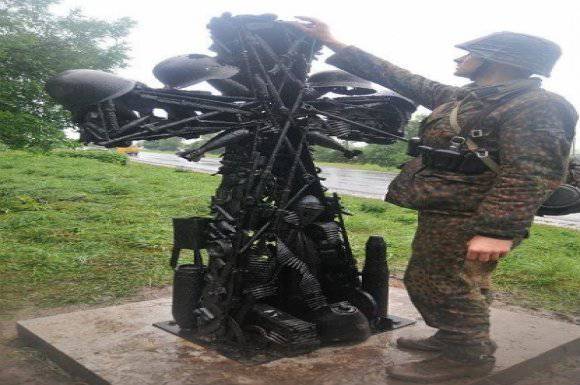 Ctrl Enter
Noticed oshЫbku Highlight text and press. Ctrl + Enter
We are
Corporations that owe their success to the Nazis
Military Reviewin Yandex News
Military Reviewin Google News
287 comments
Information
Dear reader, to leave comments on the publication, you must to register.